The Nassau County Ocean Highway and Port Authority (OHPA) held its first meeting of 2018 on January 10 at the Page Governmental Complex in Yulee. In the absence of Chair Adam Salzburg, Commissioner Carrol Franklin (District 4) chaired the meeting.

Despite what appeared to be an urgency at their December meeting to pass certain measures which would have allowed for a transfer of operations at the Port of Fernandina from Kinder Morgan to Worldwide Terminals by the end of 2017, the situation remains the same at the beginning of the new year with Kinder Morgan still operating Nassau Terminals on OHPA’s behalf. 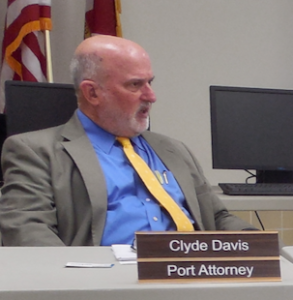 OHPA Attorney Clyde Davis, who has been working with Kinder Morgan and Worldwide Terminals to finalize the transfer, reported that both parties still expect the transaction to occur. However, because of delays in closing, he cited a shift in the bond account balance that necessitated OHPA action to rescind or cancel motions made at the last meeting to approve a Joint Written Request (JWR) to disburse funds from the Revenue, Surplus and Maintenance Funds. OHPA unanimously approved Davis’ recommendation. Davis advised that once a new closing date is finalized, OHPA will be asked to approve a new JWR reflecting the current fund balances.

Davis reported that the sticking point has been devising a method for the defeasement of the bonds.  “Defeasement” relates to methods by which an outstanding bond issue can be made void, both legally and financially. [See previous article for more information on retiring the OHPA bond debt: https://fernandinaobserver.com/uncategorized/nassau-terminals-will-probably-soon-have-new-owner-to-replace-kinder-morgan/] Davis said that as of 3:00 p.m. on January 10, that method has been tentatively established by the parties.

Commissioner Robert Sturgess (District 1) queried OHPA accountant Pierre LaPorte regarding apparent misgivings LaPorte had expressed in November regarding the transfer. Sturgess said that LaPorte had registered uncertainty over what the new operator would bring to the table in terms of experience. Sturgess asked if LaPorte still harbored those misgivings.

LaPorte explained that at the time there seemed to be a rush to finalize financial details so that the transfer could be made by the end of December 2017. He said that he had not been called upon to make a recommendation to the board, adding that there were no criteria in place to enable the board to determine if Worldwide Terminals was capable of operating the Port of Fernandina. He also said that the agreement between OHPA and the port operator needs to be renegotiated. “There’s a lot of work still to do,” LaPorte said

Following some discussion OHPA commissioners asked that Christopher Ragucci, the President and CEO of Worldwide Group, be invited to the February OHPA meeting to discuss his business plans for the Port of Fernandina operations.

Newly elected Fernandina Beach City Commissioner Ronald J. “Chip” Ross introduced himself to OHPA as the commission-appointed liaison to OHPA. He explained that the city’s Planning Advisory Board (PAB) had proposed revisions to the Port Element of the city’s Comprehensive Plan in 2016. He distributed a packet of information that included a 19-page comparison of OHPA proposed policy and suggested PAB alternatives and a 7-page city staff report summarizing the proposed update and providing background information.

Ross invited comment and input from OHPA commissioners, indicating that the proposal to revise the Port Element of the city’s Comprehensive Plan would be coming before the Fernandina Beach City Commission (FBCC) for consideration “within the next few weeks.”

Port Attorney Clyde Davis disagreed procedurally with Ross on moving forward. He seemed to suggest that while the PAB could make suggestions, the city was required to adopt what OHPA approved.

Ross stressed that the city is not contesting the OHPA Master Plan, which has already been adopted. He said that the city is only dealing with its own Comprehensive Plan and is therefore restricted to consider only the Port of Fernandina, which is located within city boundaries.

After more back-and-forth, Davis suggested that he talk with City Attorney Tammi Bach “to work out a decision tree to move forward.” Davis reminded OHPA commissioners that they are 2 years out from adopting a new master plan.

Davis said that OHPA planning is larger than Fernandina Beach and that OHPA also has other projects in the planning stage that will bring about a shift in planning from city to county. OHPA needs to be aware of these dynamics, he said, so that consistency across jurisdictions is maintained.

OHPA Commissioners were generally supportive of moving forward with a workshop upon the return of Chair Adam Salzburg later this month. Acting Chair Franklin also acknowledged a request from Fernandina Beach City Manager Dale Martin for a joint meeting between the boards to discuss mutual interests, possibly as early as March.