The Board of County Commissioners called its special meeting of April 8, 2020, to order at 10am. The meeting was conducted via GoToMeeting. GoToMeeting is an online meeting, desktop sharing, and video conferencing service. The BOCC must hold such a meeting every seven days to extend the State of Emergency. County Manager/County Attorney Michael Mullin stated that Governor Ron DeSantis may issue an executive order extending the time frame from every seven days to every 30 days but that has not yet happened.

All commissioners were in attendance as shown on the screen. Also participating via phone were Dr. Eugenia Ngo-Seidel, director of the Florida Department of Health – Nassau County, and Greg Foster, Emergency Management Director.

A welcome addition to this format is the ability of residents to have questions answered during the meeting. In addition, should an individual want to speak at the meeting that can also be facilitated. To do so, interested parties simply need to send an email to [email protected] or call 904-530-6009.

One resident submitted a written question circulated to all participants before the meeting. This three-part inquiry was directed to Dr. Seidel asking about the availability of corona virus tests in Nassau County, how they are allocated and the turnaround time for test results.

Dr. Seidel responded by first reporting Nassau County now has 27 {[now 29] cases of which there have been (cumulatively) five hospitalizations. She went on to explain that there are two types of rapid tests and elaborated on one that is now commercially available and distributed by Abbott. She described that test as “an antibody test” which shows if an individual has been exposed to the virus but does not detect an “acute infection.” About its’ availability, she said “It is being prioritized to hospitals and long-term care facilities.”

As to the time needed to get results and exactly how many tests are currently available in Nassau County, Dr. Seidel gave no numbers. 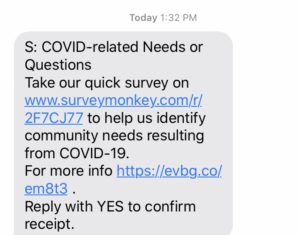 Greg Foster gave a report on activities of the Emergency Operations Center (EOC) noting that they will be conducting a poll later today via social media in an attempt to get a better idea of unmet needs.

In addition, the EOC is working on finalizing a plan for identifying alternate facilities and shelter hotel locations in the event a mass quarantine is needed. That plan, however, must be approved by the Federal Emergency Management Agency (FEMA) to ensure reimbursement.

County Manager/County Attorney Michael Mullin shared a report on a phone call which occurred earlier in the day with Regina Duncan, President of the Nassau County Chamber of Commerce and other Chamber board members. That discussion was related to the development of possible grant and loan programs. Mullin noted that this was a very preliminary discussion and more data was needed. He mentioned that a call was to be made to Vystar, the largest credit union headquartered in Northeast Florida, which had earlier partnered with Jacksonville on a similar program to provide a multi-million-dollar relief package to small businesses. Mullin underscored that this is just the beginning of discussions. Related to that was a comment made by Commissioner Bell who shared that he had received a call from a resident farmer who could no longer afford food for his livestock.

Prior to adjournment, commissioners extended kudos to first responders, health care workers, County staff and others. Concerns about re-opening beaches were expressed but consensus appeared to be that safety is paramount. Commissioner Edwards encouraged residents to “Buy Local and Buy To-Go,” and in adding a bit of levity to the situation, stated that he was committed to that mantra and as a result said, “I’m gaining weight and may need a wider screen.”

/Cindy-Jackson-150×150.jpg” alt=”” width=”119″ height=”119″ />Editor’s Note: Born in Hagerstown, Maryland, Cindy received her BA in Political Science from Dickinson College. Upon graduation, Cindy began her career on Capitol Hill working as a legislative aide and director. She later became a part of the public relations and lobbying team of the American Iron and Steel Institute and served as director of the office of state legislative affairs for the Aircraft Owners and Pilots Association (AOPA). Cindy was involved in economic development with the state of Maryland, and served as executive director of Leadership Washington County. As a community volunteer, Cindy participates in numerous volunteer activities serving as a member of Sunrise Rotary, and as board member of Cummer Amelia Board of Directors.