Mr. Bill Grant, Electric Operations Manager of Florida Public Utilities (FPU), spoke before the Fernandina Beach City Commission at its August 5, 2014 Regular Meeting to explain the reasons for a proposed rate increase that will take effect soon as an interim measure and permanently in January 2015, if approved by the state’s Public Service Commission.  If approved, the average electric bill for a 1,000 kWh/month residential customer will increase in January 2015 by $6.12 or about 4.62%

He responded to questions from the commissioners and members of the public on both the rate increase and citizen input regarding the desirability of putting all power lines underground.  Grant delivered a detailed slide presentation highlighting FPU’s position and achievements since its merger with Chesapeake Utilities in 2009.  Grant reminded commissioners and the public that the Public Service Commission has scheduled a forum for public discussion of the rate case for Wednesday, August 20, 2014 at 5:00 p.m. at the Atlantic Avenue Recreation Center Auditorium, 2500 Atlantic Avenue, Fernandina Beach, FL.

Grant explained that following FPU’s merger with Chesapeake in 2009, FPU’s fuel rates have been lowered four times.  Their negotiated fuel cost reductions have lowered average bills 14% since 2010, or about $22 per month.  FPU has continued to work on lowering fuel rates in innovative ways.  He cited as example an agreement with Rayonier to purchase their excess generating renewable energy capacity.  FPU is working with Rock Tenn on a similar agreement.

Grant addressed the reasons for their need to increase rates.  He said that FPU’s operating and maintenance costs have increased about 19% since the last base rate case in 2008, generally due to increases in payroll and benefits, insurance, vegetation management & vehicle fuel. Milder weather has also contributed to declining revenues.  The NE service area has been experiencing limited growth, while the NW is losing population.  He said that FPU has only added a total of 151 customers in the past 5 years.  Also, the demand for electricity has declined at an average annual rate of 1% over the past 6 years.

Grant reported that FPU has worked to keep costs down by cutting 7 positions—14% of their work force—since the 2008 rate case.  Also, the company’s cost of debt is lower following the Chesapeake and FPU merger in 2009.  FPU has allocated significant costs to their natural gas and propane utilities, repositioned several management and professional positions, and distributed the costs of new buildings.

During the upcoming five-year planning period, FPU has identified an estimated $30M in additional system replacements and reliability improvements that should enhance system reliability for many years to come.  By the end of 2014, Grant said that FPU will have invested close to $25M in system replacement and improvement projects over the last 6 years.  FPU has continued to reduce the number of power outages and their duration as shown in the graphs below: 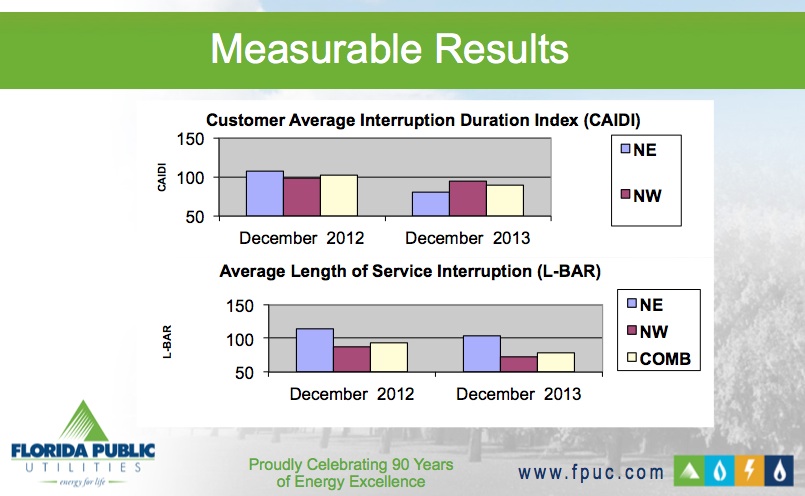 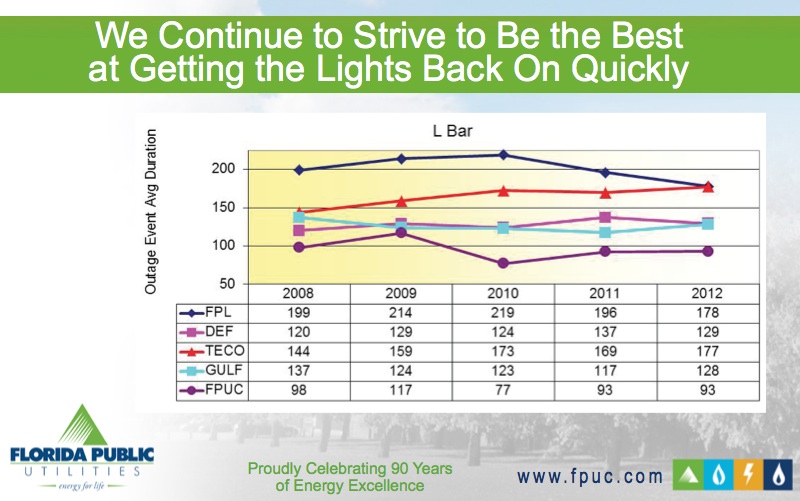 Grant concluded his presentation by telling the FBCC that the decision to seek rate relief was not an easy one and would not be required if FPU had other options.  He invited questions from the commissioners and the audience.

Commissioner Johnny Miller asked about the type of fuel FPU used.  Grant replied that the electricity is purchased from JEA, which primarily uses coal to fuel its Hecksher Drive plant.  But it also collects solar energy from a collector field west of Jacksonville.  Miller asked about the possibility of placing electric lines underground.

Grant replied that with 55% of island lines underground, Amelia Island far outpaces other communities, where the average is about 25% underground.  He said that there are issues with underground lines, especially in storm prone areas.  A storm surge can uncover lines, as has been the case in some communities.  Returning power following a major storm can also be more time consuming because of the need to dry out lines, locate underground shorts and deal with animal problems.  “Be careful what you ask for,” Grant cautioned.

Commissioner Pat Gass raised concerns over FPU’s tree trimming techniques.  She complained about the resulting holes in the center of tree canopies.  She said that she understood the need to trim, but questioned why some of the more unsightly trees were not just removed during the process.  Grant acknowledged that FPU workers try to be sensitive to this issue, but that it is sometimes unavoidable.  He reminded Gass that not everyone thinks tree removal is desirable.  Gass asked Grant to get together with City Manager Joe Gerrity to see how the situation could be improved.

Mayor Ed Boner asked if there might be a way to bury lines in areas frequented by tourists.  Grant said that there is a process for requesting such action, but he reminded the commissioners that FPU has buried lines downtown along Centre Street and a block on either side.  City Manager Joe Gerrity said that FPU has been a good corporate partner and that the city appreciates that.

Questions from the Public

Two audience members rose to speak in favor of burying electric lines along South Fletcher Avenue.  Both complained about the large concrete utility poles that have recently replaced smaller wooden ones and their effect on panoramic beach vistas.

Linda Martucci asked when the pole replacement would be finished along South Fletcher.  Grant replied that it has already been completed.  She then asked if individual homeowners can request to have overhead lines moved underground if they are willing to pay the costs.  Grant advised her to go to the Public Service Commission website www.psc.state.fl.us, where there are rules governing how that can be done.

Pete Smith, a South Fletcher resident, said that while the island boasts about its world-class facilities, “We don’t look world class because of the big [utility] poles.”  He referenced an earlier report prepared by the city’s Underground Utilities Committee that recommended utilities be placed underground but said that FPU would need to be forced to do so.  As a result of the group’s efforts, all new subdivisions must place electric lines underground.  But with respect to burying existing lines, he said, “It’s not him [Grant] or the PSC [Public Service Commission]—it’s you guys [FBCC].  This is where the buck stops.”

Smith continued, “Costs need to be determined by a third party.”  He urged the FBCC to “imagine and think forward.”

Louis Jordan addressed the FBCC during Public Comment and asked what the next steps were in considering the points raised by the earlier speakers.  He said that he had no opinion one way or the other but hoped that the matter would be pursued so that commissioners and the public would better understand costs and benefits.  Commissioner Miller said that he wanted to research other communities’ experience with underground lines.  He went on to explain that if three commissioners want to pursue a matter brought up by the public, the FBCC would do so.  However, because of public notice requirements, the FBCC cannot act on a matter that has not first been advertised.  Commissioner Gass joined in the discussion, informing Jordan that today the Commission had been made aware of the item; discussion and possible action would be added to a future meeting agenda.  It was the consensus of the FBCC to pursue an investigation into the feasibility of placing electric lines underground.

But Vice Mayor Pelican cautioned commissioners and the public that the last study indicated that such a move was cost prohibitive, adding that she understood that the recent cost of burying a line from the street to a residence (about 30 feet) had cost the homeowner $1,500.  Boner advised that the item would probably be placed as a discussion item on the agenda for an upcoming meeting shortly.  Jordan replied that he was satisfied with that response and the he was just concerned that it initially appeared that nothing would be done to address the issue.

The full report in 2010 of the Underground Utilities Committee can be found at http://www.fbfl.us/documentcenter/view/14168

Bottom line of the committe’s findings. Underground is more expensive to install and repair but less expensive for maintenance. However, the main transmission lines serving the Island will always be above ground and represent the “single point of failure” although steps can be taken to storm harden and make less likely to occur.
While the study cited the incremental cost of providing u/g utilities in a new subdivision at approximately $800/home the study also noted that the cost of retrofitting an existing property could be 3 – 4 times that of a new property.

I Think Nassau County Should Lead By Example And Promote Solar Energy! I Would Agree To A 5 Cent Gas Tax For This!

I would read the rate increase notice from the new owner of FPU a bit closer. This comment: An average 1000kw user residential bill would go up 4.62% bears explanation. The dollar figure is correct, $6.12, but the actual increase to FPU for the base portion (infrastructure, operating costs and return on investment) would approximate a 19% increase. (The remainder of the bill is a pass through for energy costs.)

I am not suggesting the infrastructure does not need an upgrade. I am merely pointing out complete transparency and clarity in this process is not being promoted by this notification letter by obfuscating the dollar amount of the needed infrastructure upgrades needed. Keep in mind, this increase is not for one year, but will be with us long into the future.

Hi this is Pete Smith I am one of the folks that spoke up during this meeting.

The issue is more than just cost. While cost is very important, the UUC report and even anecdotal comments by the City Commission fail by assuming the costs are ‘prohibitive’, in the absence of a real estimate to perform the work.

In addition to cost, the benefits include greatly improved neighborhood aesthetics for residents, improved property values and therefore a stronger tax base, better options for safer street lighting, better storm hardening particularly along the beach and main neighborhood feeder lines, and improved memorable experiences for tourists who spend money in our community.

If anyone reading this comment lives along South Fletcher I want you to do two (2) things – 1) Imagine all the wires gone next time you drive down our street; and 2) join our neighborhood website at http://www.southfletcher.nextdoor.com.