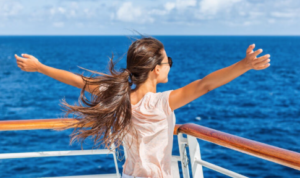 “The Florida delegation is very supportive and is trying to work with the administration and the CDC to see what efforts we can do to get the industry up and operating,” Florida Ports Council (FPC) Vice President of Governmental Affairs Michael Rubin said. “It’s still the only industry that’s not allowed to operate at the moment.”

If it was up to the Centers for Disease Control and Prevention (CDC), or at least Director Dr. Robert Redfield, the “no sail” order for cruise ships from U.S. ports would remain in effect until February.

“The president, the vice president and the task force follow the science and data to implement policies that protect the public health and also facilitate the safe reopening of our country,” he said.

CLIA’s plan extends its April voluntary “no sail” order that expires Thursday by one month and is based on recommendations from the Healthy Sail Panel, established by major cruise lines and led by former Utah Gov. Michael Leavitt and former U.S. Food & Drug Administration Commissioner Dr. Scott Gottlieb.

With U.S. cruise lines shut down since March 24 and international trade slowed, a chief component of Florida’s $117.6 billion maritime industry – the nation’s second-largest largest – has been removed from the equation for six months.

According to a study financed by FPC, the COVID-19 pandemic has cost Florida’s 15 seaports $23 billion in “lost” economic activity and as many as 170,000 of the more than 900,000 jobs the state’s maritime industry generates across the country.

A Sept. 24 report by U.S. Federal Maritime Commissioner Louis Sola said Florida has lost $3.2 billion in economic activity and 49,500 local jobs that pay $2.3 billion in wages as a result of the suspension of cruising in response to the COVID-19 pandemic.

Nearly 60 percent of all U.S. cruise embarkations occur in Florida.

“It is not just large companies that benefit from the cruise industry,” Sola said. “Cruise customers begin and end their voyages by using taxis, eating in restaurants, visiting museums and shopping in local businesses. These are small- and medium-sized businesses; many are independently or family owned. The cessation of cruise operations can affect them as much, or more, as it does the companies that operate the ships or the ports where the vessels call.”