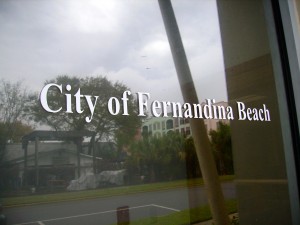 The Fernandina Beach City Commission (FBCC) held its first regular March meeting on Tuesday, March 5, 2013.  About a dozen members of the public were on hand to hear presentations by Dave McDaid of Irishwaterdogs (www.irishwaterdogs.com) regarding their volunteer programs to support wounded service personnel, first responders and their families.  Trey Warren of 8 Flags Playscapes (www.8flagsplayscapes.org) also provided a status report on his organization’s campaign to build a community accessible playground behind the Atlantic Avenue Recreation Center.  Both organizations are seeking assistance from the public, the business community and local government in in-kind or financial contributions.

By 6:45 p.m., the FBCC was ready to tackle resolutions.  The first resolution (2013-26) on the surface appeared to be fairly routine:  approving a proposal from Advanced Disposal Services in the amount of $33,803 to provide solid waste removal and cleanup services for the 2013 Shrimp Festival.  The amount had already been set aside in the city’s 2012-13 budget.  Commissioner Arlene Filkoff moved approval and Commissioner Ed Boner seconded the motion.

Vice Mayor Charlie Corbett asked, “Is there any consensus that we might not do that next year?”  Commissioner Pat Gass said that there was a lot of money at stake, and continued funding of Shrimpfest cleanup needed to be discussed by commissioners.  Boner cautioned that the city must consider the impact of not providing such support.  Commissioner Filkoff suggested that the city might be sending a message that “we are shutting our doors to special events.”  Mayor Sarah Pelican agreed that continued funding of Shrimpfest cleanup needed further discussion during next year’s budget meetings.  Commissioner Gass went on to praise Advanced Disposal’s efforts following last year’s Shrimpfest, and City Manager Joe Gerrity added kudos to city staffers Rex Lester and Jeremiah Glisson as well.  The motion went on to pass unanimously.

On a 4-1 vote, with Commissioner Filkoff dissenting, the FBCC formalized the transfer of $1,011,350 to the Capital Improvement Principal account for prepayment of the F2 loan (resolution 2013-27).  City Manager Gerrity, in answer to a question from Commissioner Filkoff, said the prepayment would result in a $13,000 savings in the current budget year. She followed up with another question about reducing franchise fees that had been raised to pay off the loan.  Gerrity said that savings would be negligible:  approximately a nickel savings on $100 of electricity used.  He also said that the loan money had already been returned a week ago, and that the resolution under consideration just formalized the action.

City Manager Gerrity requested that the FBCC  approve Resolution 2013-28 to allow Brance Diversified, Inc. to remove an additional 1,700 cubic yards of dredge material from the City Marina basin at a cost of $40,460, with the increased cost to be split between a FIND grant and the city’s marina dredging fund.  Gerrity advised that such a move would take advantage of personnel and equipment already in place.  He also stated that there will be no dredging next year.  The motion carried unanimously.

Mayor Sarah Pelican called local resident Lynn Williams to the podium during thediscussion on the agenda item above.  She asked Williams to address the FBCC regarding his idea to reduce dredging costs.  Williams explained that the Dutch have done quite a bit of work on a process known as water injection dredging.  He requested $8,000 from the FBCC so that he and local riverfront property owner David Cook could conduct a test of this process on submerged lands that are part of Cook’s holdings.  Because this process has not been approved by the state, it cannot be used on public lands.  Vice Mayor Charlie Corbett seemed puzzled by the $8,000 amount.  He said, “I thought you said this would cost $4,000.”  Williams allowed as how the first test would, but he wanted the extra money in case the process needed to be modified and repeated.

Commissioner Boner said that if this process is successful, it could result in a substantial amount of savings for the city, perhaps $100,000 per year.  Williams said he would modify an IMS dredge ($40-55,000) so that the process could be conducted on a larger scale.  Williams said that if they can go deep enough, they would be able to create a self-flushing marina.  Commissioner Filkoff asked if the state had approved this process.  Williams replied that the state accepts that there needs to be a new technique, so they would watch this test with interest.

Commissioner Filkoff pressed on, asking Williams what expertise he possessed to be able to build such a system or perform the work.  He admitted that he had little experience but that “David Cook can build anything.”   Both Mayor Pelican and Commissioner Gass thanked Williams and suggested that since the $8,000 was within the dollar amount the City Manager can spend without need for FBCC authorization, Williams should just apply to the city manager.  There was no motion to approve the action; only Commissioner Filkoff dissented.  [Note:  This item was not on the agenda so there is no back up material available.  A public information request is pending to determine more detail with respect to plan, engineering and costs. — SZT] http://

This item (Resolution 2013-19) was postponed at the February 5, 2013 FBCC regular meeting to allow time for a joint workshop between the FBCC and the Community Redevelopment Area Advisory Board (CRAAB).  During that workshop, which was held on February 25, city staff and CRAAB members went through detailed presentations on the history of the CRA and the need for the proposed changes.  Commissioner Gass and Mayor Pelican indicated at the end of the workshop that they were still doing research on the issue.  The issue came back to the March 5 meeting for action, and several commissioners claimed that they had many unanswered questions regarding the possibility of expanding the CRA area, the need for a 40 year extension, the advisability of resetting the base year this year, and the administrative costs of the CRA.  City Planner Kelly Gibson reported that if the FBCC wants to reset the base year this year, action must be taken soon.  Commissioner Gass said that if she would be forced to vote at the current meeting, she would vote no.  Commissioner Boner expressed his desire that all five commissioners come on board in support of the plan whenever it is adopted.  Mayor Pelican stated many of her current reservations.  She said she wants to see a more detailed plan and an analysis of expected outcomes.  She wanted to know the impact on city-wide services such as public safety and emergency services.  She said, “There are so many unanswered questions.”  Commissioner Filkoff said that if it were the will of the commission to postpone this once again, she wanted the commission to impose a time frame on itself and identify exactly which pieces of information commissioners need in order to make a decision.  Vice Mayor Corbett continued to express his uneasiness with the proposed length of the plan (40 years).  Commissioner Gass said that she had been provided with examples of CRAs that work in neighboring communities, but that she also wanted examples of ones that do not work.

City Planner Gibson said that timing is appropriate to review the plan, which was first drawn up in 2005.  She said that the CRAAB had time to consider the FBCC’s concerns and return a draft, revised plan and proposed completion dates within the plan.  She believed that the draft could be ready in 6 weeks.  The FBCC voted unanimously to postpone this item until their June 4, 2013 meeting.

City Manager Gerrity asked permission to obtain a survey and an estimate for this property, which appears surplus to the city’s needs.  Considerable discussion ensued over the amount of usable land on this parcel, since it includes an unbuilt portion of Pasco Road.  Mr. Robert Bridgers, a Melton Road resident, spoke against selling this property.  He noted that it contains a ravine, a fire hydrant and the entrance sign for the city golf course.  He suggested that it would be better used for beach overflow parking.  Mrs. Jody Spangler, a neighbor, also spoke against selling the property.  City Attorney Bach reminded commissioners that if they planned to vacate Pasco Street, currently on the property, they needed a city ordinance.  Commissioner Filkoff asked what Gerrity planned to do with the proceeds from any sale of the property.  He said that it would go into city reserves, not to bridge a budget deficit.  The consensus of the FBCC was to authorize a property survey, but to hold off on obtaining estimates at this time.