City to Miller: Sinkhole not our problem

Island, but not city, resident Janet Miller used her three minutes of public input timeand then some at the February 17, 2015 Fernandina Beach City Commission (FBCC) Regular Meeting to ask for an update from the city on progress in resolving her problems with a sinkhole on an adjoining piece of property. She got the report, but it didn’t solve her problem. After considerable research, the city has determined that it is not at fault and accepts no responsibility for Miller’s problem.

City Manager Joe Gerrity reported that he had spoken with Vern Wickline of the St. Johns River Water Management District (SJRWMD) who has also spoken several times with Miller. At no time, Gerrity said, did Wickline make a representation that the poorly engineered drainpipe was the city’s responsibility. Gerrity added that SJRWMD is a regulatory agency, not a permitting agency. Had a permit been issued for a drainpipe in that area, they could follow up with the permitting agency. Wickline stated that SRJWMD has never seen a permit for any type of drainage easement or drainage in that particular area. 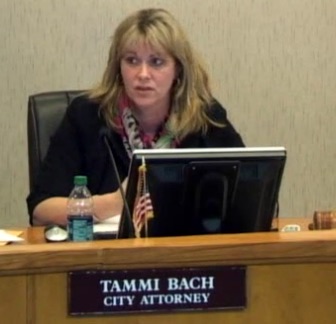 Miller countered that she had a letter from SJRWMD claiming that it was city responsibility. Both Bach and Gerrity claimed that the letter sent to the city did not say that. Bach referenced a lawsuit that Miller had previously filed in connection with work the county was doing on her property in 1996. Via public records request Bach learned that Miller had settled with the county regarding the same issue. Miller said the suit was with a title company, not the county. Bach said that although the city had annexed the neighboring property, they never took responsibility for county pipes or roads. Bach said that as best she could determine, the county had moved the pipe as part of the settlement from Miller’s property to the neighboring property.

Miller claimed that the SJRWMD had directed its letter to the responsible party, the city. Gerrity said that was not the case and that he had been very specifically informed that this is not the city’s problem. He suggested that Miller needed to get back in touch with Wickline with any questions on that score. 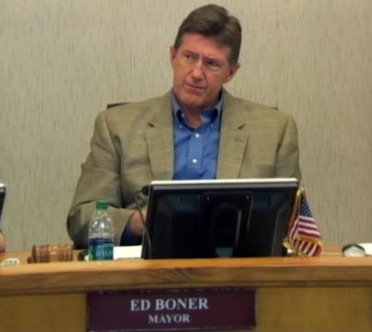 “In other words,” Miller said, “y’all are not going to take responsibility for this.”

Mayor Boner replied, “It’s not our ditch or our drain.”

“But it’s your city property draining through it, right? Like Walmart and Amelia Park,” Miller countered.

Gerrity named several other county roads served by this drain. “But there is clear indication that the county put that pipe in there,” he said.

Miller continued to claim that city property is draining through the faulty drain. Gerrity and Bach clarified that the property is privately owned, not owned by the city.

Miller asked, “So you are telling me this is a county issue now?”

Bach replied, “That’s exactly what we are telling you. … We are not responsible for any of the structures put on your or neighboring properties.” 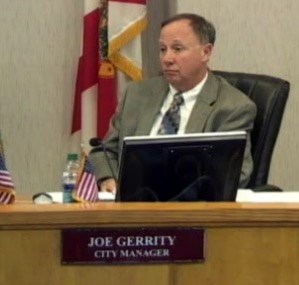 After some further discussion over homeowners and city insurance, Miller said, “Is the City – County meeting still scheduled for March 19? Maybe I can get it worked out then with both of you in the same room.”

Gerrity said, “Again, I will tell you that from our research there are no easements, there has been no permission granted for anyone to do any work on those parcels.”

After more discussion with the Mayor over permits and easements, Miller asked, “Then should I go after the neighbor? Is it his responsibility to fix it?” Boner said, “That’s not a question we can answer.”

In a previous article on this topic it was erroneously reported that Miller, who lives at 1745 Pheasant Lane, was a city resident. She resides in Nassau County, but the neighboring, privately owned property is located in the city.

How can the city annex property from the county–for tax purposes, I assume–and not be responsible for the utilities? Does that mean when I buy a piece of land and a tree on my property falls over onto my next-door neighbor’s house, I’m not responsible for damages to his home and property? It would seem to me that if there is a broken storm drain pipe on city property and it is eroding away a neighbors property, the city should be responsible for the repairs. who installed it, at this time is a moot point. The City owns the land that has a broken pipe that needs to be fixed. If it wasn’t eroding away Ms Millers property no big deal, But it is. City,Do the right thing. Fix the pipe.

Steve, I am not a lawyer so that this response with that cavaet but I am pretty certain I am correct as to your hypothetical situation about the tree. Unless the neighbor can prove that the tree in your yard was diseased or somehow was obviously a hazard, any damage caused by the tree is covered under their insurance not yours. By the same degree, that neighbor has the right to cut any limbs or portion of the tree that extends over their property line. When the city annexes a property (and all property annexations are voluntary) it generally does assume water and sewer utility service unless the property is already serviced by a non-city utility (i.e. Amelia Utilities) but the information in the article indicates there was no documentation of an easement on the property. In any event, I don’t believe that even it is was that the City would automatically assume responsibility. A1A is a state road and although it runs through the City, the state has responsibility for maintenance of the road and right-of-way. Similarly, 14th Street, Jasmine and Sadler Roads are designated county roads and Nassau County maintains maintenance responsibility.
I am also guess that since the joint City-County meeting will be a workshop, they have no requirement to accept public comments and given the long lapse in time between the last such meeting, I would be surprised if they took them here given the significant city and county wide issues that need to be discussed (public safety, beach renourishment expense sharing, etc.).

Dave, I’m Sure Ms. Miller is very Frustrated with this whole issue. It’s been going on for some time as she watches her property disappear by the actions of others? I would hope the city does the right thing. I would assume her insurance doesn’t cover the damage. I also know the history between Ms. Miller and John Mandrake.” Me thinks she protest to much” Oh by the way, have you blown the dust off your resume? I think there could be an opening at town hall soon.

Wow..why not do what is right? For crying out loud…people get elected and absolutely forget who they work for. Here is a taxpayer caught up in a governmental “he said, she said.” Bet if it was Gerrity’s property it would of been handled already without any fanfare or political nonsense. “By the people, for the people” Do what is right and get this problem fixed before it worsens.

Randy, Ms. Miller has been a thorn in the side of both Gerrity and in particular Mandrake over unjust Impact Fees levied on her at her beauty shop. This is all about Politics. The wrong kind.

Sorry Randy but just as soon as the City got involved in doing work on private property there would be just as many crying out that taxpayers funds are being spent to improve a private citizen’s property. Why the outcry against the City when the facts clearly state that it was the County that relocated the drainage pipe? Again, wearing my Perry Mason legal degree hat I think Mrs. Miller’s best course of action is to deal with the neighboring property owner.

And yes Dave, we all know how boisterous and righteous ya’all can be when it isn’t affecting you directly. Like I said, if this property belonged to Gerrity or any of the Political Monarchy in Fernandina…it would of never been an issue to have corrected. With that being said, I guess having the City Manager call the County Manager and strongly state a suggestion that the county may want to address this issue is out of the question? Do the gears of this podunk political municipality desire to run on the same grease Washington D.C. runs on? Hide behind legal mumbo jumbo and the vote for me signs, but the reality is that Ms.Miller didn’t put the drain there and she is not the one to be held responsible. But we have much more greater things to worry about by our local yocal governmental body, like the business owner on Centre St that parked her red van in front of another persons business for the entire day.

Dave, I’ve got to agree with randy. Don’t blow smoke. If this same situation happened to anybody at city hall, ie Erosion caused by a defective storm drain. There would be on outcry, no public conversation. Mr. Mandrake and his crew would just fix it. It wouldn’t have mattered if the County, City or a private contractor was the installer. Ms Miller didn’t install the pipe nor did the neighbor. I would assume the pipe was layed through a right of way which is owned by the City. Since annexation. I was told at a City Commission meeting that ” The City owns 25ft right of way from the middle of the road and” we can do what ever the hell we want” you remember the side walk through Lakewood. This whole mess has nothing to do with Ms Miller, other than her property is eroding away because of a broken utility pipe which the City owns. I can think of no better use of IMPACT FEES than to fix this pipe.