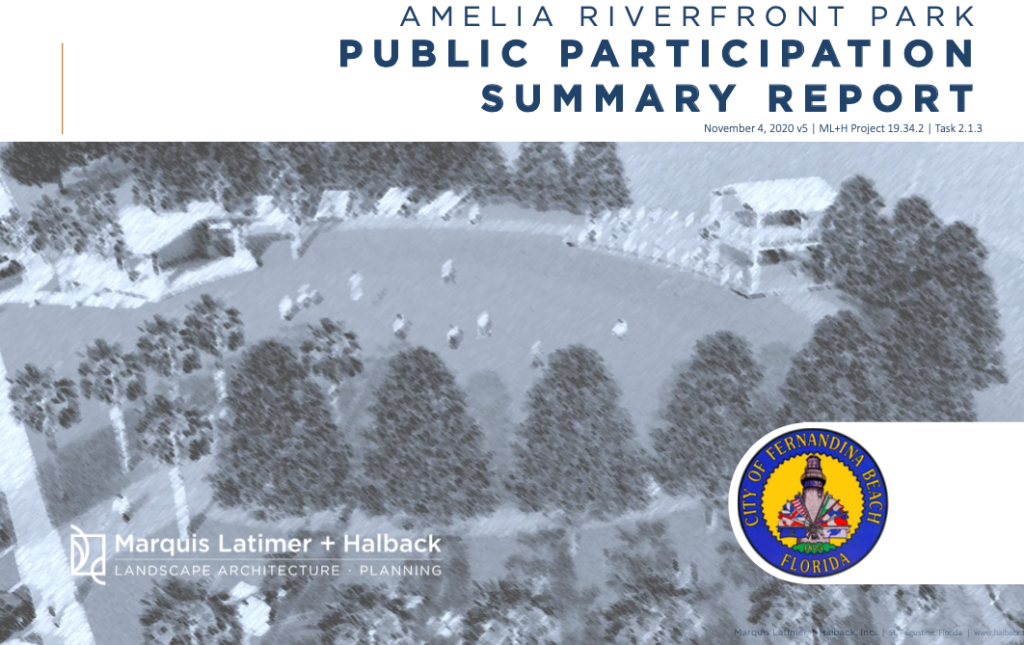 From September 15 – October 18, 2020, the plans were made available for public viewing and comment on an open, online community hub.  Invitations to comment had been posted on City social media sites as well as the City’s website.   Additionally, local online and print media, as well as unofficial social media sites, advised the public of this opportunity to comment on the draft concept that had been developed over the past year with input from the FBCC and the project Steering Committee.  The consultants also held two, advertised virtual hub meetings which allowed interested parties to participate in live, online discussions about the design.

Marquis reported that there had been 2,300 unique visitors to the site, with the largest number of visitors accessing the site via Facebook and on mobile devices.  Fernandina Beach accounted for 935 of the visitors and Yulee registered 128.

There were 74 – 143 responses to the specific areas of the concept on the survey.  Respondents rated various elements on a scale of 1 – 3 hearts, with three being most favorable.  All responses ranged in the 2-3 range.  Better than 75 percent of the comments focused on the design as opposed to cost. 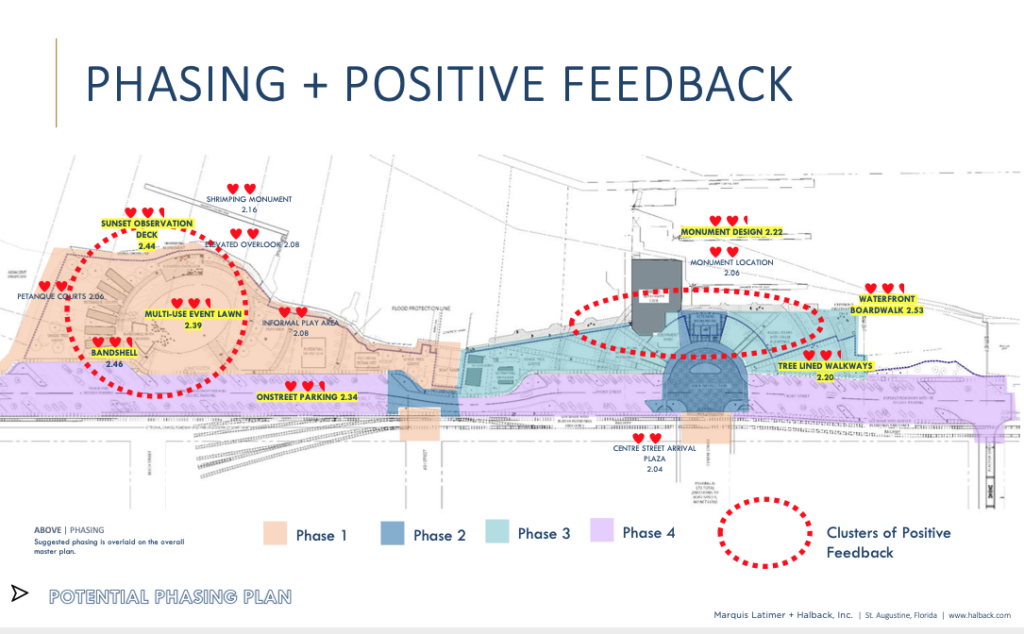 Marquis reported that the survey had asked people to identify themselves on their responses.  Only those responses were included in the tabulation.

The report underscored that the survey showed positive feedback for the proposed bandshell, lawn and boardwalk.  Marquis also stated that the City has funding to proceed with that portion.  He summarized the general feedback as a call to incorporate more “authentic grit” of Fernandina into the plans.  Examples included: adding a historic working waterfront building, the anchor, existing signage, pavilions, etc.).  The designers are editing the master plan and solicited additional feedback from Commissioners to be incorporated into the next update slated for December.

“We are committed to making sure that this is an iconic, fully engaging, fully Fernandina experience which is about the views, the green space, and just creating a space for the community to come together,” Marquis concluded.

Commissioner Mike Lednovich, who had been monitoring public comments as they were received, took a different approach to monitoring the comments and declared that there were only 64 unique email addresses among the commenters.  Of those, he noted that there were 29 people who simply said, “Don’t build the park at all.” He also expressed concern at the small number of responses, given the number of city residents.  “I had hoped for a little better participation,” Lednovich said.  “It’s difficult for people such as myself to make design decisions based upon such a small response.”  He also suggested that if respondents had known costs, their responses may have been different.  His final comments noted public concerns over parking and a surprisingly negative reaction to plans for the Veterans Monument.

Marquis replied that his team was preparing a roadmap, upon which phasing and other decisions would be based.  He acknowledged that cost was definitely a major component and would affect how and at which point the vision would be implemented.

“You’re hitting at the very moment we are at in this process,” Marquis said, ‘so this was a wise comment.”

Vice Mayor Len Kreger also noted the “do nothing” vote and the relatively light response overall.  He expressed concerns about costs and questioned whether funding was currently available to proceed.  He said that the City has about a million dollars lined up, but that also includes the funding for shoreline stabilization.  “Funding is the big deal, and the City has to answer that,” he said.  Kreger said he supported moving forward on the planning.

Mayor John Miller thanked the consultants for their work adding that over his 7 years on the FBCC, he has seen 7 different waterfront concepts.  “This is the most cohesive one I’ve seen, and that’s why it is well done,” Miller said.  He acknowledged that funding would be a problem, but he reminded Commissioners that they had asked the consultant to develop the best concept they could by obtaining the most public input as they could in this era of Covid.  “I think you’ve done that,” Miller said.  But he took issue with the concerns over the low public response.  He recapped measures the City had taken to get the word out and the invitations to participate.  He also reminded Commissioners that even during prior public meetings on the topic, the same 10-15 people show up to speak.

“It’s up to us as Commissioners to take all of the information and input and move forward on behalf of the community,” Miller said.

Marquis, in responding to concerns over low public participation, explained that there were over 120 unique survey responses, not all of whom also provided a comment.  He invited more Commissioner questions and input through the City Manager over the next two weeks for incorporation into the next iteration of the concept.