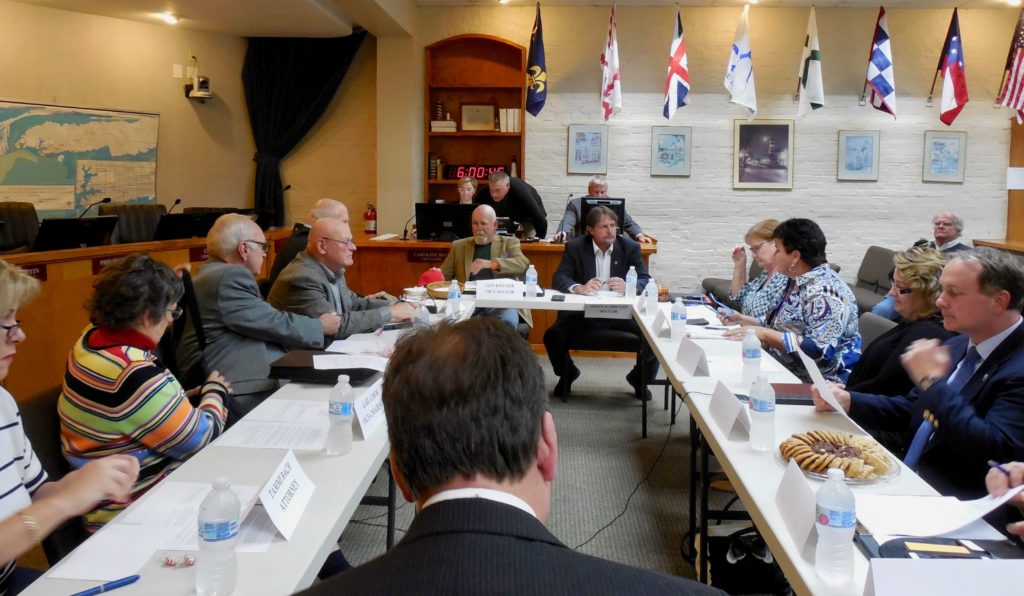 Fernandina Beach Vice Mayor Len Kreger kicked off the meeting with positive remarks about intergovernmental efforts to combat drug use among students and to reinforce the importance of school safety.  He praised efforts of the Nassau Alcohol, Crime and Drug Abatement Coalition (NACDAC),a nonprofit organization that seeks to advocate and communicate with the general public, community organizations and community-servicing organizations that work with youth, to eliminate drug, tobacco, alcohol use and, at the same time, reduce associated criminal behavior.

NACDAC Executive Director Karrin Clark explained to the boards recent efforts to explain the dangers of “vaping” to students in a series of public town hall meetings in the schools. Parents are also a target of their educational efforts.

Kreger stressed that the Fernandina Beach Police Department continues to work with the school district to ensure the continued safety of students.  He said, “We are here to help the School District secure their schools.”  City Attorney Tammi Bach announced that the FBCC would consider a resolution next month to provide additional School Resource Officers in the city, one at Emma Love Hardee School and one at Southside Elementary School.

Fernandina Beach Mayor John Miller went around the table asking city commissioners if they had any items to discuss. Commissioner Chip Ross asked about potential for improvement of traffic flow along Citrona Drive during school dismissal times.  Superintendent Dr. Kathy Burns replied that “we are where we are right now” with being able to make any improvements.  School Board Chair Dr. Donna Martin agreed, saying that there are areas in the county, such as Minor Road in Yulee, that are much worse.  She said that is why the district encourages students to ride their bicycles, take school buses and walk, when possible and safe.

Ross raised the question of the future of the historic Fernandina Beach High School building, which is currently being used for school district administration.  He wondered if the School District had given any thought to having the building included in the Fernandina Beach Historic District.  The board appeared willing to learn the benefits of such action, but allowed that at the current time there are no plans to vacate the building; nor is funding available to allow for significant upgrades.

In response to questions, Dr. Burns explained requirements set by the state for new construction, either for educational or administrative use.  She said that school districts must be able to prove that they are beyond capacity to receive permission to build a new facility if they propose to use state money.

City Commissioner Phil Chapman asked the School Board to consider using the soon to be completed city airport terminal as an educational component of the science curriculum.  He suggested that field trips to the airport would allow students to learn more about the science of aviation and meteorology. School Board members reacted positively to his suggestion.

Chapman also made a strong pitch for increased vocational education in local schools.  He was joined by other commissioners and school board members in advancing arguments that local trades could use, and the community would benefit from, more graduates with expertise in building, hospitality, culinary and mechanical trades.

Both women acknowledged a need to work harder at getting the story out to the community with respect to programming that produces skilled, certified, technical workers.  Burns said that the district is introducing “career shadowing” programs and looking to attract apprentice programs.  She also told the FBCC about a program developed with Baptist Nassau designed to prepare special needs students for meaningful work in the labor market.

Mayor Miller spoke about the city’s mixed success in establishing a Youth Advisory Board.  An idea of former Mayor Ed Boner implemented by former Mayor Robin Lentz, who also works for the school district, this program was disbanded due to problems with student attendance.  The program had been designed to help students understand how local government works and how meetings are run.  But the monthly meetings always seemed to conflict with some other student activity.  Coupled with the need for student participants to be city residents, both attendance and student interest appeared to diminish with time.  School Board Members appeared supportive of revitalizing this program.  Dr. Burns and City Attorney Tammi Bach agreed to work together in an attempt to reactivate the concept.

Mayor Miller also raised the possibility for students to make use of the city’s Public Education and Government (PEG) Channel, Comcast Channel 264.  He said that this channel could provide an opportunity for student broadcast projects. Dr. Burns hailed this as a promising idea, citing the TV Production Class currently offered in the schools. Dr. Martin added that the Journalism Class could also make use of such an opportunity to conduct interviews for broadcasting.

When asked if the School Board had any outstanding issues with the city, Dr. Martin said they had not.  She added that since she lives in the city, if she had problems she would feel comfortable “picking up the phone and calling the city.”  She said she appreciated the hard decisions the FBCC is called upon to make.

Mayor Miller responded that “he could not be happier” with the local schools.  “Thank you,” he said to the group, “and keep up the good work!”