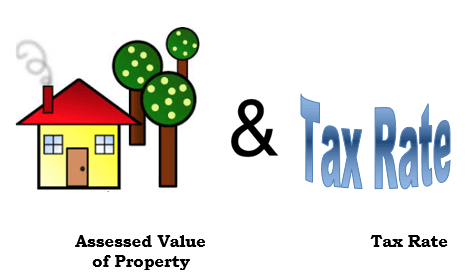 A person doesn’t know how much he has to be thankful for until he has to pay taxes on it.

This is the time of year when irate taxpayers gird their loins to do battle with the local taxing authorities.  Yet amid the demands for lower taxes, often overlooked are the vast numbers of people who stay quiet and below the radar on the topic. I had always attributed their silence to an acknowledgment that they understand it takes money to pay for all the services that add up to what we collectively term “quality of life.”

But a recent look at numbers provided by the Nassau County Property Apppraiserr have given me a better reason.  Approximately 9900 properties were listed on a spreadsheet reflecting 2019 taxes paid to the City of Fernandina Beach.  The median tax levied on a property in the City was $1,120 — or $3.07 per day.  By taking advantage of early payment discount, this property owner paid $1,075 — further reducing the daily tax for living in the City to $2.95.

Isn’t it worth $3 per day to live in Fernandina Beach?

And it gets even better for many people:

Around 74 percent of City property owners — 7,300 — paid $5 or less per day in property taxes.  In some cases the amount paid was even discounted because taxes were paid early.

Even at five bucks a day, Fernandina Beach property taxes hardly seem onerous for all the services and benefits residents enjoy.  Especially when you consider that Floridians are not required to pay state income taxes.  So if residents fall within that 74 percent, they probably don’t want to talk about how little they really pay for the benefits of living in Fernandina Beach.  They understand that it would be difficult to find another city where they could live this well on five bucks a day in taxes.

The chart below presents a breakdown of 2019 tax assessments by numbers of property owners at various tax levels.  Note that the highest residential tax paid is $27,865.  Taxes over and above that amount are paid by commercial or industrial property owners. 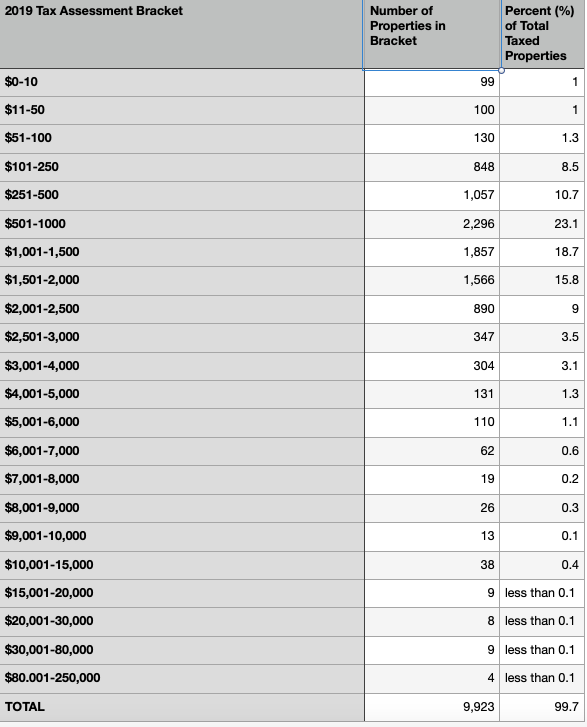 Many of the complaints over City property taxes come from recent arrivals who comprise that remaining 26 percent, meaning they pay higher taxes because the appraised value of their homes is closer to market value. Other complaints come from residents who do not understand their tax bills. Many people just look at the bottom line of total taxes due because that’s the amount that is paid to the Tax Collector.  But that amount includes:  Nassau County tax (33% ), state and local School Board taxes (35.7% ),  Amelia Island Beach MSTU (the sand tax)(0.5%), St. Johns Water Management District Tax (1.1%), Florida Inland Navigation District (FIND) tax (0.1%), Amelia Island Mosquito Control District tax (0.6%), and Fernandina Beach Voter Approved Debt (bond debt to purchase land for Greenway) (0.7%).  The percents in parentheses represent what portion of my tax bill goes to each tax.

Local governments in Florida, including the School Districts, have their own unique problems.  But they are hampered in their ability to solve those problems by funding mandates that get pushed down to the local level by the Legislature and the Governor.  Tallahassee sets the policy, and local governments must find the money to implement those policies, often redirecting money from other local needs.  While localities receive some funding from sales tax and gas tax receipts, most of the money needed to both meet local needs and to enact programs or policies demanded by local citizens comes from property taxes.

We Floridians are happy to take advantage of some of those changes passed down from Tallahassee, like the $25,000 tax exemptions for homesteading and for being Senior Citizens.  But with each exemption we receive, local governments are challenged to make up the difference in their own Budgets by delaying capital improvements, increasing fees or raising property taxes.

Another reason local governments must consider raising taxes relates to a Constitutional Amendment passed in 1994, which became effective the following year. Known as the ‘Save Our Homes’ amendment, it limits the annual increase in the assessed value of homesteaded properties to 3% or the change in the National Consumer Price Index (CPI), whichever is less. This means that despite rising market value of their homes, homesteaded property taxes can only be increased 3 percent per year.  Subsequently, the Legislature even limited the growth of assessed value of non-homestead properties to less than 10% each year. The year of 2008 is the base year for this limitation, and implementation began for the 2009 Tax Roll.

And now homestead tax breaks have even been made portable, cutting further into local government revenue.

Below are a few examples showing how all these benefits and exemptions play out. The longer a property has been homesteaded, the lower the taxes paid.  Hence, the low assessed value for the examples from Downtown and Old Town.  All but the Southside property have subtracted $50,000 in exemptions from their assessed value.  That property qualified for the first $25,000 exemption but not the second because the property was not assessed above $50,000.  The areas of newer development have taken advantage of the $50,000 exemptions, but the difference between market value and assessed value is not as dramatic as in the older neighborhoods.

The bottom line is that no one likes to pay taxes, but everyone wants to enjoy a good quality of life in Fernandina Beach.  Because no one has yet invented a mechanism to convert marina dredge into gold, someone must pay for the excellent public safety, streets and recreation amenities that we all enjoy.  And for the most part, that someone is us, the taxpayers.

Recent transplants to Florida are known to scratch their heads over Florida election laws and Florida tax laws with good reason:  they can be confusing, complicated and often make no sense.  But they are the law.  So neighbors with the same size property and the same size household can pay widely different taxes, depending on how long they have lived there.  No one thinks that’s fair, but that’s the way it is.  No conspiracies or evil geniuses at work.  Just plain savvy politics by the folks in Tallahassee.

There may be liberty and justice for all, but there are tax breaks only for some. ~Martin A. Sullivan

[Some things to keep in mind:  any computational errors in this article are the fault of the author, not the Property Appraiser.  And the numbers are intended to represent the City of Fernandina Beach, not just anyone who has 32034 Zip Code.  Although it’s been said many times many ways, if you do not see a line for Fernandina Beach on your tax statement, you are not a City resident.]