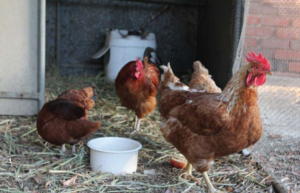 New chickens will not be coming home to roost any time soon in Fernandina Beach backyards. Via unanimous vote at their March 5, 2019 Regular Meeting, the Fernandina Beach City Commission (FBCC) rejected a proposed ordinance that would have detailed conditions under which residents could keep chickens in city back yards without the need to get a specific permit from the City Manager, which is current practice.

Keeping chickens in backyards in various American urban areas has grown in popularity over recent years.  Advocates cite the benefits of fresh eggs as well as the educational value for children.

But city commissioners, who spent more than 20 minutes going over the proposed ordinance, taking public input and citing their research into other communities, ultimately decided that such an ordinance was not in the public interest.

Commissioner Mike Lednovich cited research done by Dr. Catherine Brinkley  into existing ordinances around the country dealing with backyard chickens.  She discovered that most ordinances addressed the nuisance problems associated with the practice but ignored health and safety concerns.  Lednovich cited statistics relating to salmonella  traced to backyard chickens as well as Newcastle disease  .

“I tried to look for compromises,” Ross said, “but in this case I think there are a lot of reasons that backyard chickens are not a good thing for the city.  I think there are more potential problems than benefits.”  He suggested that city staff craft an ordinance that would ban all poultry and other barnyard animals in the city.  He said he would be willing to entertain a new ordinance with a solid co-sponsor like the Nassau Humane Society.  Ross then moved to disapprove the ordinance; Vice Mayor Kreger seconded his motion.

City Manager Dale Martin in response to a question from Commissioner Lednovich said that there are currently seven permits for backyard chickens in the city.  Lednovich asked if following defeat of this ordinance “the chicken police” would confiscate those chickens.  City Attorney Bach said that the city would not be seizing chickens.  She added that it would be the job of the current permit holders to come into compliance with any new ordinance or requirement.  Lednovich attempted to attach a list of conditions to current permit holders to allow them to continue to keep chickens contained and protected from predators.

Ross attempted to clarify the current situation in which the City Manager may grant permits for keeping backyard chickens.  He asked what would happen if the FBCC defeated the ordinance.  Martin replied that staff would come back with a revised ordinance to prohibit chickens and other barnyard animals within the city.

Mayor John Miller called the question on the vote to disapprove the proposed ordinance.  Commissioners voted unanimously to disapprove it.

Following brief discussion commissioners also decided that they did not want the city manager to issue any new permits for backyard chickens.

Lednovich expressed a willingness to allow current permit holders to continue to keep their chickens provided that they agreed to abide by city requirements for containment.  Ross disagreed with imposing new requirements, but wanted it understood that current owners could not add new or replacement chickens to their flocks.

Bach summarized the discussion and informed commissioners that she would write a new ordinance that would come back to them in April for consideration.  The new ordinance would speak to containment issues for those with current permits for backyard chickens while banning other livestock within the city.  In the meantime, the City Manager would issue no new permits.

Mayor Miller recalled discussions about backyard chickens that an earlier commission had five years ago.  Regarding current permit holders, Miller said, “With respect to containment, if the chickens are not contained, they will be gone.  We live in Florida.  If you let your animal out, you will be out of an animal.  There are several animals here that like to eat your pets.”