The City Commissioners have spent a significant portion of time during the past several City Commission meetings attempting to resolve the challenges of noise in downtown and e-bikes on the Greenway. Following the meeting earlier this week, a regular attendee to City Commission meetings commented, “If you can’t find a solution, is there really a problem?” The e-bike issue has apparently been disposed of through a “motion to table indefinitely” (translation from government speak- “We don’t want to talk about this anymore”). The noise ordinance will return to the City Commission for additional review next month.

The goals were conveniently classified into four categories: City Assets, City Debt, Conservation, and Waterfront. Within each category, the delineated goals established a specific task to accomplish and a deadline to complete.

The City Debt category offered three objectives: determine Golf Course operator (deadline: Feb 10, 2021), adopt plan to address outstanding Marina debt (May 31, 2021), and adopt plan to address outstanding Golf Course debt and propose capital expenditures (Jul 27, 2021). The Golf Course operator determination was completed on Feb 2 with the determination to not renew the expired management agreement with Indigo Golf Partners (formerly Billy Casper Golf) and solicit proposals for a new management operator, with the City returning to operational control for the remainder of the fiscal year (approximately six months). Subsequently, the City Commission opted to forego the Request for Proposals for a management operator for another twelve-to-eighteen months. City staff will continue to manage Golf Course operations during that time. The other Golf Course goal (debt and capital expenditures) will be addressed by the stated deadline through the budget preparation process.

The May 31 deadline to address Marina debt will be missed by at least one day: the City Commission will consider re-financing options at its Jun 1 regular meeting. At the meeting earlier this week, the City Commission instructed staff to move forward with initiating arbitration due to the Federal Emergency Management Agency’s (FEMA) failure to timely respond to the City’s appeal for Marina repair reimbursement (the FEMA response was due in mid-January following timely appeals by the City and the State Department of Emergency Management).

For the Waterfront, the first objective was met: Adopt Phase 1 concept plan for the waterfront park (in the area of the parking lots south of the boat ramp). What has been previously referred to as “Concept E” for the development of the waterfront was adopted by the City Commission on Feb 16. While the concept only was adopted at that time, the City is currently soliciting bids for the three specific components authorized by the City Commission: the resiliency components (living shoreline, seawall), a new boardwalk, and new petanque courts (likely to be an internal City effort). Also included as part of the solicitation for bids is the demolition of what is referred to as the boaters lounge (the structure immediately north of the boat ramp). The City has received a matching grant for the demolition and rebuilding of this facility.

The other Waterfront tasks are Construct Phase 1 (the components described above) by Nov 30, 2021, and present a draft concept for a future segment near Alachua Street (no specific date for that effort has been established due to other factors). The successful completion of a previously adopted goal of completing the entire waterfront (marina, park, rail crossings, and additional private development) by Jan 1, 2024 remains highly likely.

Only two tasks were associated with City Assets: inventory and document major City facilities and solicit bids for the construction of the proposed fire station near the Airport. The inventory was completed on Mar 30 (the stated deadline) and the City is preparing to solicit the fire station bids well in advance of the Aug 1, 2021 deadline.

Finally, the tasks associated with Conservation have yet to be completed but those tasks should be completed by the stated deadline. Tree protection and mitigation ordinances need to be reviewed by Aug 1 (a Tree Committee is working to provide recommendations). The City’s assumption of responsibility for a park on Crane Island also needs to be determined by Aug 1 (this may be moot as it appears that Nassau County will instead assume responsibility). The three remaining tasks are more long-term: improve the City’s Community Rating System score to a Class 3 by Jan 27, 2024; increase the tree canopy by five percent by Feb 1, 2024; and construct a dune system to the 100-year storm protection levels by Feb 1, 2029.

City staff will continue to support and pursue the goals established by the City Commission. 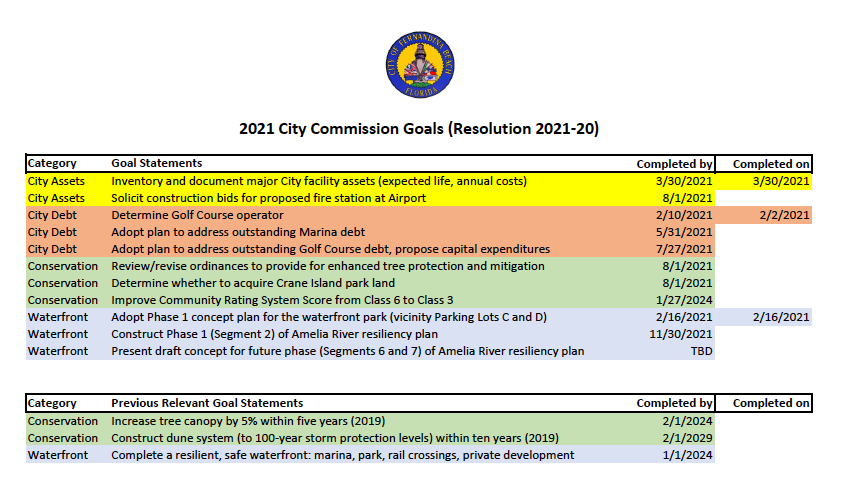