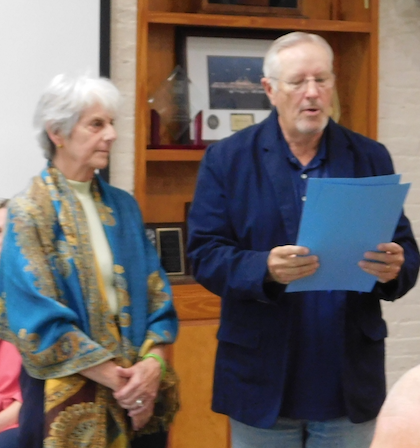 Mr. and Mrs. Caples “discovered” Amelia Island in 1979.  Their dream of creating a small inn began with the 1735 House, but later became fully realized with their creation and stewardship of the Elizabeth Pointe Lodge, which Conde Nast Traveler named the second best hotel in America.

David served on the boards of the Amelia Island YMCA, the Fernandina Beach Chamber of Commerce, the Rotary Club, SKAL, the Brady Point Preserve, the Quarterback Club as well as Tourist Development Council. He was also a founding member of the Florida Bed-and-Breakfast Association.  But closest to David’s heart was co-founding the Katie Caples Foundation and the Katie Ride for Life following the loss of his eldest daughter. It is through these organizations that David and Susan were able to spread nationwide organ donation awareness. Their efforts have saved countless lives and will continue to do so forevermore.

Mayor Lednovich read from the Proclamation:  “Fernandina Beach is a better place due to David’s indomitable spirit and keen influence. His legacy helped shape our island into the crown jewel that so many enjoy today.”

In accepting the Proclamation, Susan Caples said, “David loved this community and we couldn’t have found a better place to live.  When people ask ‘Where would you move to?’, I respond ‘There is no other place to move to.’  Those were David’s sentiments, too.  Thank you for honoring  him.”