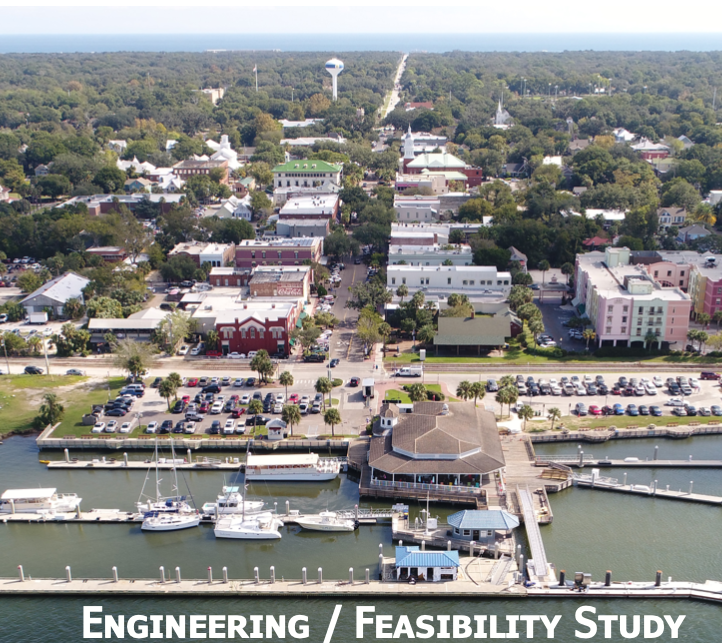 Not on the Fernandina Beach City Commission (FBCC) agenda for July 6, 2021, but high on the list of concerns for the City and patrons of Brett’s Waterway Cafe, was the future of the structure and its safety in light of a recent study on the building’s failing underpinnings.

The situation is under review currently by the lease holder, Centre Street Restaurant Group (CSRG), Inc., located in Jacksonville Beach.  While commonly known as “Brett’s”, the popular restaurant is the building’s tenant, not the lease holder.

The structure, located at 1 Front Street in the center of the City Marina, has been declared unsafe by the City’s Building Official and the City Engineer, pursuant to Chapter 22, section 26 of the City of Fernandina Beach Code of Ordinances.

In a letter dated July 2, 2021, City Engineer George notified the lease holder of the City’s intent to condemn the unsafe building unless work to repair the situation is not commenced within 60 days.  Otherwise, the structure must be vacated on or before September 2, 2021.

City Manager Martin explained that Passero had been commissioned to undertake the study as part of the City’s waterfront resiliency project.  He reported that City Engineer George had issued his ruling following his personal, onsite inspection and reading the Passero report.  Martin said that City officials met earlier in the day with the lease holder and his associates, who “are going to develop a plan of action.”  The CSRG lease, which was entered into with the City in 1997, runs until December 1, 2025.

Article 15, Section 1(b) of the lease states among its operational requirements:

“To keep and maintain the buildings, piers, pier foundations, docks and structures located on the Lease Parcel clean, orderly, and in a good state of repair and free and clear of any obstruction, rubbish or litter, in accordance with Florida State Sanitation Laws and the laws, ordinances, rules, regulations or policies of any local, state or federal governmental body and in a structurally sound condition.”

George said, “A lot of the past reports said that the situation was repairable.  But the problem becomes the logistics of doing the repairs, the methodology.  The State Building Code requires that with respect to any substantial improvements of the structure, if repairs equal more than 30 percent of the value of the structure, then all current elements of the Code must be met.   That means flood plain, hurricane, etc.  It would require tearing down the entire structure and building back new.  The 30 percent value would be $111,000.  Any repairs at any level would exceed that amount.”

Mayor Mike Lednovich asked, “Is the building currently safe for people to be on that structure?”

George replied, “No, in my opinion.”  He went on to answer other technical questions.

Lednovich then asked if Brett’s Waterway Cafe should continue to operate.

George replied, “No one can predict whether it’s an imminent failure or not.  It becomes an experienced engineer’s opinion whether it’s imminently failing.  In my case, I have a public duty to protect the safety and welfare of the public.  In my mind, it’s not safe.”

City Attorney Tammi Bach said it is her understanding that the restaurant will continue to operate unless the City tells them otherwise.  She launched into an explanation of the City’s role under the Unsafe Building Abatement Code of the Florida Building Code (1985).  Under that code, the standard for whether or not you issue a notice to vacate, the engineers must find that there is an immediate threat to life and safety.  “That has not been found by any of the engineers,” Bach said. “The alternative is that we provide 60 day notice for them to vacate or repair the issues.”

Kreger asked, “In 60 days they can’t possibly make these repairs.  So what will happen?”

Bach said, “At that point you can tell them that they cannot be in that building.  And you cannot fix the problems without exceeding the 30 percent value threshold, meaning you would have to tear the building down and rebuild it.”

George explained the details of the work that would need to be done to effect repairs, noting the complexity of having to deal with the tides in working under the structure.  “Is it possible?  For a bunch of people who can get into such a small space to do it.  But from a feasibility standpoint, it still wouldn’t meet the criteria of 30 percent.  It’s a difficult standard for them to meet.”

Lednovich saiid his concern is that there are no signs indicating that the building is unsafe.  Bach replied that under the code, the City cannot do that at this stage.  “Otherwise,” she said, “I would have done that Friday.  It’s either allowing the 60 day notice period or finding an immediate threat.”

“This business is a multi-million dollar annual business.  We are not joking around about what we do,” Bach said, adding, “Yes, the City is liable for anything that happens on that property right  now.  But our liability is greatly diminished if after 60 days we tell them they must vacate, but they don’t.”

“People over profits,” Lednovich said.  “Wherever we shoot this pool cue people must have notice that this is an unsafe building.”

In response to a question from Kreger Bach said, “The building needs to be demolished.”  Kreger said that the dilemma is a major problem for waterfront planning and development, in addition to being a big cost if the City will need to demolish it.  George said that it is better to demolish a building before it collapses.

If the violation is not cured after 60 days, it would go before the City’s Code Enforcement and Appeals Board (CEAB).  The lease holder could then appeal that decision to Circuit Court.  Enforcement would be stayed for months or years if the case went to court.  Bach said that should that happen, she could file an injunction to force them to vacate the structure.

Bach said that CSRG’s insurance carrier might also weigh on this matter.

The Mayor asked Andrew Holesko of Passero Associates to respond to some questions.  He said that his firm’s charge was to look at the 1 Front Street structure in the context of waterfront resiliency for a 1.3 mile section of shoreline in the Historic District.  “It wasn’t just to go in and assess the substructure of Brett’s,” he said.  Holesko explained the various studies and meetings that occurred between the completion of the field work and the production of the report.

Kreger said, “Regardless of what has been done in the past, right now the City is taking all the legal action to correct a situation that has been known for a long time.”

Ross said, “Personally, if I owned the building, I’d close it because I’d rather be sued for breaking somebody’s rice bowl than paying for their casket.  But the City has to follow all the legal processes.  I don’t know that we are kicking the can down the road, but we’re damned if we do and damned if we don’t.”

Bach said that she would provide an update at the next meeting.

In response to a question from Lednovich, Martin said that he has not been approached by any other party looking to operate a restaurant at 1 Front Street.