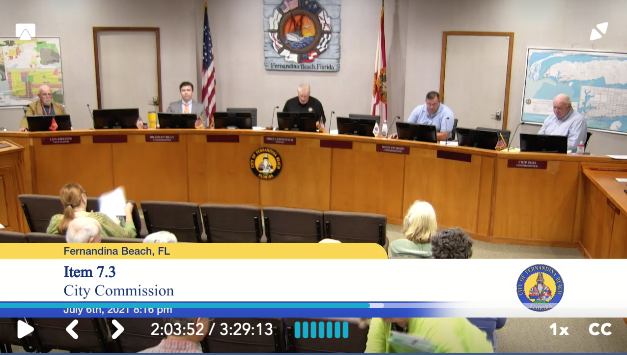 Fernandina Beach City Commissioners (FBCC) dealt with several important issues affecting the Amelia Riverfront at their July 6, 2021 Regular Meeting:  undergrounding utilities along North Front Street; refinancing an internal marina loan from the Utilities Department; the lease for Atlantic Seafood.  At the workshop that preceded the meeting, Commissioners decided to defer discussions on the future configuration of Front Street pending receipt of FDOT and railroad construction plans for improving railroad crossings at Ash and Centre Streets as well as the construction of the new crossing at Alalchua Street.

This project was initially suggested three years ago as a precursor to improving the waterfront and building a waterfront park.  Florida Public Utilities (FPU) came to agreement with the City to underground utilities between Broome and Centre Street along Front Street.  The cost for this work is $254,000, which the City had anticipated in its Capital Improvement Plan.  Commissioners voted unanimously to approve the Resolution and move forward with the work.

Resolution 2019-29 established the loan from the Utility Wastewater Fund to the Marina Fund. The original loan was at the prevailing interest rate of 4.35% in February 2019.  At this time, due to pandemic triggered lower interest rates, staff recommended refinancing the Marina loan at the lower interest rate of 1.48% which will result in lower debt service payment and overall savings of approximately $73,000 annually.  Commissioners approved this recommendation unanimously. 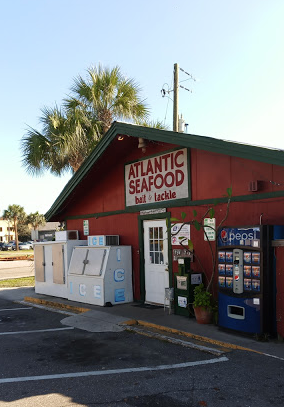 The City was approached by Ms. Anne Coonrod regarding a new forty year lease with renewal options for Atlantic Seafood to relocate just south of its current location.  The current lease has 6 additional years to run.  Coonrod proposes to build a new structure to include possibly a restaurant/bar and retail space as part of the waterfront design plan. The leased area will generally include 9,000 square feet of uplands located on Water Lot 29.

Based upon a previously completed appraisal (Robert Driggers; Nov, 2019), the recommended ground lease rate for the proposed approximately 9,000 square foot parcel was $70,000 per year ($7.47 per square foot; triple net). The resulting revenue would be allocated to the City’s Marina Fund.  During the term of the lease, the leaseholder owns the building.  At the end of the lease period, the building reverts to the City.

The Resolution did not present a new lease and new terms.  Rather it authorized the City Manager and the City Attorney to begin negotiations over a new lease.  After considerable discussion and public input, the FBCC rejected the Resolution on a 3-2 vote, with only Commissioners Bradley Bean and Chip Ross in support.

Many misconceptions apparently spread via social media caused consternation in the public over lack of a bidding process in deciding to award a contract extension that lengthened the  lease period, set a new rent schedule and also included significant additional square footage.

Martin said that since the City will be extending the boardwalk as part of waterfront improvements, the City agreed to renegotiate the lease.  He said that the proposed rate came from an appraisal by a commercial real estate professional.  Ms. Coonrod requested that the following terms be included in the renegotiated lease:

4) City will bring utilities to the new leased premises;

5) The proposed lease location is located in the CRA and has no parking requirements currently, and the City Commission-approved conceptual plans for the waterfront improvements show very few lost parking spaces south of the public boat ramp;

6) Lease will be assignable with approval of City Commission;

7) City will subordinate its interests as lessor to a mortgagee for financing of the construction of new building;

8) You will have the right to construct a restaurant together with a bait and seafood shop in accordance with the City’s Land Development Code and state laws in the proposed location just south of your current leased premises;

9) City can insert lease restrictions in other City leases that prohibit any other restaurants south of current Brett’s restaurant at the Marina;

10) The new lease will be a triple net lease;

11) All improvements on the new leased premises will become the property of the City at the expiration or termination of the new lease; and

12) Any building plans on the new leased premises will have to be approved by the Historic District Council for CRA Guidelines and the City Commission prior to applying to the City for development permits.

Vice Mayor Len Kreger expressed concern about moving from a 1,200 sq ft lease to a 9,000 sq ft lease before the FBCC had approved any plans for buildings at the waterfront.  “What we are doing [by renegotiating this lease] is providing increased commercialization before we have decided to do that,” Kreger said.

Seven speakers addressed the FBCC on this topic with a variety of comments and questions.  Some stressed the heritage of the City and preserving the working waterfront.    Concerns involved failure to bid the lease, size of the new building, and apparent government support of a particular business.

Mayor Mike Lednovich explained that the lease was not put out for bid because there are 6 years remaining on the current lease, giving the current leaseholder the opportunity to renegotiate terms with the city, which also needs to have the current building moved in order to move forward with waterfront improvement plans, to include a boardwalk.

Lednovich said, “My goal in this entire discussion is transparency.  There are no secret deals.  Nobody up here is getting rich.  Believe me.”

Lost in discussion seemed to be that the FBCC was not being asked to approve a new lease.  The Resolution would just authorize negotiations for a new lease for a new site with an expanded commercial use.  While the initial proposal was for a 9,000 sq ft parcel, there was no plan presented to build a 9,000 sq ft building.

Lednovich verified with Coonrod that she is working with developer Ernie Saltmarsh to turn over a new lease to him, if such a lease can be renegotiated.  He also said that plans to relocate the existing warehouse at 231 N. Front Street to the property have apparently fallen through since neither Coonrod nor Saltmarsh is interested in repurposing that building on City property.

Kreger reiterated that he was opposed to discussing this matter until the FBCC decided what it intends to do with the property set aside for the waterfront park.

City Manager Martin, in response to a question from Commissioner Ross, said that in the conceptual plan for the park there were spaces reserved for commercial activity.  “Technically, the matter before you is dealing strictly with the Atlantic Seafood lease.  You have already approved the shoreline resiliency plan, which includes the boardwalk and the petanque courts.  That’s all that you have approved [for the waterfront].  But Ms. Coonrod has the right to renegotiate her lease up to and including additional space.  It then becomes your job as City Commissioners to decide what terms and conditions you are willing to accept.”

Ross said that he would vote for the Resolution but he wanted to know as part of the negotiation how much of the 9,000 sq ft the building would actually need.  He also wanted to see a concept plan for what the City plans to lease along the waterfront.  “The current Atlantic Seafood building is held together by termites holding hands.  If they let go, the building collapses,” Ross said.  “We have an opportunity here for a public/private partnership that will not cost the City anything because the leaseholder will pay for the building.  Ms. Coonrod has been a good partner with the City; Mr. Saltmarsh has a good reputation for doing good things with properties he owns.”

Commissioner David Sturges expressed concerns over the length of the proposed new lease in comparison with other commercial leases.  Ross agreed that Sturges was correct with respect to commercial leases in existing facilities.  But when a lessee builds a new structure, they need more time to recoup their investment, Ross said.

Commissioner Bean said, “We must remember that we have to move [the Atlantic Seafood] building.  Because there is time left on the lease, we must act, we must renegotiate.”  He added that his biggest concern was including a clause that would allow for rent increases based on the Consumer Price Index.

Lednovich said that the entire process was driven by urgency to accommodate the proposed relocation of the warehouse at 231 N. Front Street.  “That urgency no longer exists,” he said.  “Atlantic Seafood can stay where it is.”  He agreed with Kreger that the FBCC has made no decision on what the waterfront should look like.  He said that the waterfront location is some of the most desirable property in the City, suggesting that it should be leveraged to bring the City as much revenue as possible.  “We can always do the boardwalk later.  We don’t have to rush into this,” he said.  “There is too much at stake here; there are too many decisions that need to be made.  We don’t need to do this now.”

Ross said that the FBCC would not be rushing into anything by beginning a negotiation.  “[Talk about improving the waterfront] has been going on for 20 years … “

“Why would we not encourage them to bring forward a proposal?” Ross continued. “Other people in town are asking why we don’t use public/private partnerships to develop the waterfront.  We have someone who has money, time and expertise willing to step forward.  Let’s give them a chance.”

When the vote was called, only Bean and Ross voted in favor, so the Resolution was not approved.