Fernandina Beach City Commissioners (FBCC) spent close to 2.5 hours the afternoon of April 24, 2018 revisiting goals they had established during their 2018 Visioning Retreat held at the city golf course in January.  Commissioners reaffirmed that improving the waterfront remained their top priority. But they also allowed that until the city receives engineering reports from both the railroad study and the seawall study, further progress toward redesigning or improving those areas of the city remain on hold.  Without a solid understanding of the amount of land needed potentially to move Front Street to the west to accommodate railroad concerns and traffic patterns, any design for a waterfront park would be premature.  Commissioners also discussed goals with respect to conservation, the beaches and beach parking, and Fire Department services.

Commissioner Chip Ross had taken upon himself the task of rearranging input on the goals that individual commissioners had forwarded to the City Manager into one document for discussion.  There was no written input from Commissioner Roy Smith or Mayor John Miller.  City Manager Dale Martin led discussion on the status of the goals as commissioners worked their way through the Ross document, broken down into time periods for action or completion.

City Commissioners tiptoed around issues of cost and funding to achieve their goals.  Some of the costs have already been provided for in the city’s current budget or the 5-Year Capital Improvement Plan.  Other costs may involve significant grant requests, state money and/or loans.

Commissioners called for additional studies:  engineering evaluation of the seawall beyond the current area of study; options for the Vuturo Building site; life expectancy of the boat ramp; traffic engineering study for downtown; beach parking study.

Commissioner Chip Ross said, “We need to determine our options and what we can afford.” 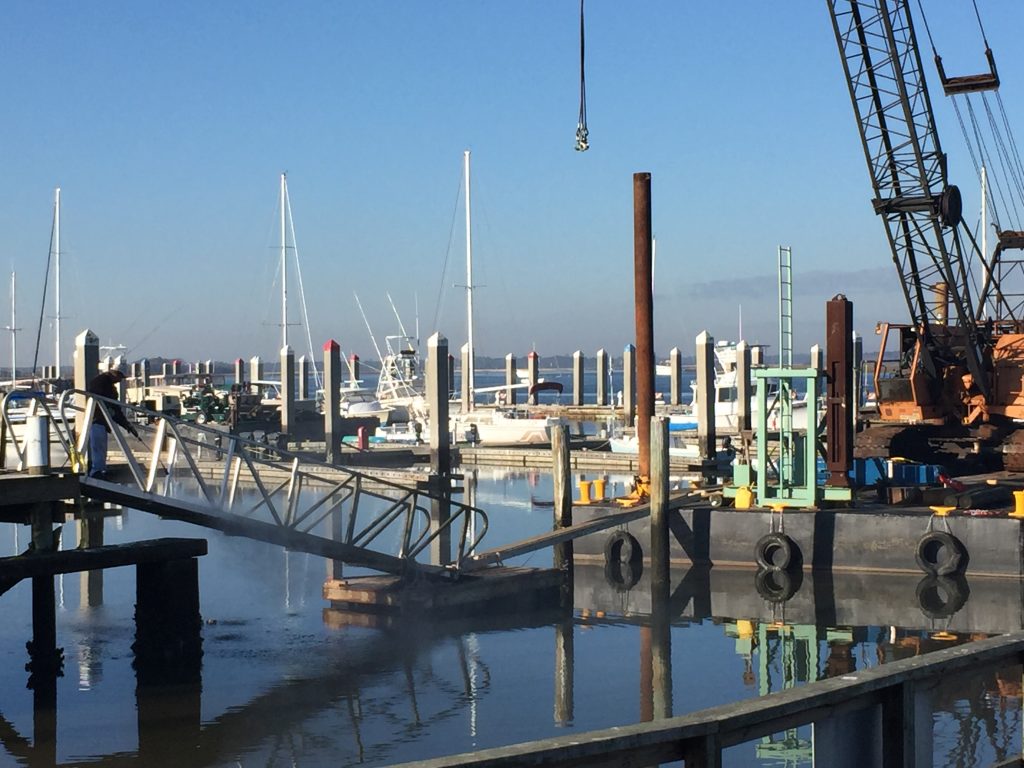 Within the May-August timeframe, the city anticipates receipt of two key studies which are currently underway:  the railroad engineering study, to determine safety needs for the railroad and signalization needs for pedestrian and vehicular crossings at Ash, Centre and Alachua Streets; the seawall engineering study, to determine the soundness and life expectancy of the portion of the existing seawall between the boat ramp and Brett’s Waterway Café.  Commissioners agreed that before any decisions can be made with respect to a waterfront park or use of the former Vuturo property on North Front Street, the city must have hard data on how much property may be needed to address these issues.

Commissioners engaged in a side discussion on the need/advisability to tear down the Vuturo Building, which has become more of an eyesore with each passing storm.  All commissioners except Ross appeared to support immediate demolition.  Chapman said that it appears that the city is being hypocritical in citing other properties for demolition by neglect when this city-owned property is falling apart. Ross demurred, saying that despite current assurances that permits would allow rebuilding on the vacant site, recent experience over the ability to repair the attenuator has shown that guidance followed by the Corps of Engineers can change.  He suggested leaving the building in place until the FBCC decides on redevelopment plans/use for the site.

Stormwater issues must also be addressed.  The city has obtained state and FEMA money.  Projects are going out to bid within the next few weeks.

Commissioners, especially Phil Chapman, expressed a certain frustration at what sometimes appears to be indecision on the future plans and growth of the city marina.  Conflicting opinions and courses of action, sometimes related to permits and grant money, seem to have clouded the direction of the marina’s future.

Commissioners expressed a strong desire to make decisions on the future of the marina over the next 4 months:  whether to merely repair storm damage, move northward or leave it as it is.  A waterfront redesign cannot be implemented until the FBCC decided a course of action – and sticks to it.

Commissioners are optimistic that the necessary repair permits will be granted by the Corps of Engineers, allowing the city to move forward quickly with repairs to the south attenuator and the fuel dock.

The city will soon be in the process of obtaining appraisals of the Simmons/Osteen property to the north of the city marina.  Commissioners have made no commitment to purchase this property, but they raised concerns over the need to breakwall the property and possible impacts from Front Street improvements.

Commissioner Roy Smith raised serious concerns about requiring a private property owner build a breakwall on his/her property.  He claimed that the FBCC is getting away from earlier city values.  He said he had a hard time with imposing special assessments and “making people do things because we think so.  People didn’t elect us to do these things.”  He added, “It’s almost like we are becoming a communist state.”

Commissioner Ross said that he respectfully disagreed with Smith.  “The function of government is to maintain public safety,” he said, referencing the problems with the existing breakwall.

The engineering report to the city on the status of the pilings under Brett’s Waterway Café is overdue, but the summary report indicates that there is no imminent danger of the building’s collapse.  However, areas for repairs have been noted.

Both Commissioners Chapman and Ross expressed reservations about the need for opening the Alachua crossing without more data to support the need.

By the end of the year, Commissioners and the City Manager anticipate that the following actions will have been completed:

Citizens of Fernandina Beach have expressed a strong interest in preserving undeveloped lands, saving wetlands and trees.  Commissioners have begun taking steps to see that these community desires are met. City Attorney Tammi Bach is preparing an ordinance to establish a Conservation Land Trust Fund, which will be presented to the FBCC on May 15.  City Manager Dale Martin has developed a position description for a city arborist.  With the consensus of the FBCC, he will move toward filling that position soon.

Martin elaborated on plans to reorganize the city’s Community Development Department, dividing it into a Building Department and a Planning and Conservation Department. The latter would take responsibility for trees, beaches and historic preservation efforts in addition to current planning efforts.  Vice Mayor Kreger expressed a need for a conservation/environmental manager, suggesting that oversight for the greenway and the cemetery should also be considered.

Martin indicated that this reorganization would be discussed in more detail during upcoming budget meetings.

Commissioner Ross asked the City Manager to develop a plan to identify properties that the city could purchase for conservation.  Currently, the city has money available for this purpose via impact fees and a $115K transfer from the developer of Amelia Bluff.  City Attorney Bach also suggested that the city retain the services of a certified appraiser via RFP to be able to evaluate various properties for potential purchase.

City Manager Martin indicated that Police Chief James Hurley is working on position descriptions for personnel to work as Beach Rangers.  Work is currently underway on the ordinance to allow members of the Police Auxiliary also to serve in this capacity.  Beach Rangers would conduct motorized patrols of the city’s beaches to monitor code compliance.  Vice Mayor Len Kreger stressed the need for proper training for individuals to ensure safe driving on the beaches.

The target date for implementation of the Beach Ranger program is Memorial Day weekend.

At the suggestion of Mayor John Miller, the city will form a beach parking committee to inventory existing parking and recommend options to address needs of beach visitors and residents. The committee will also be expected to recommend whether and where to institute paid beach parking.

City Manager Martin indicated that the Nassau County Board of County Commissioners has agreed to pay for a plan to increase beach parking on Sadler Road between Drury Lane and the beach.  The county will narrow Sadler to two lanes with a median and use the extra space along the road to add parallel parking.

Commissioners also discussed concerns over beach trash.  They noted overflowing trash cans and expressed interest in exploring an approach used in some other communities:  removing trash cans altogether, thereby forcing beachgoers to take their trash with them.  The city will investigate the success of these programs before attempting to introduce such a program here.

Commissioners have asked for a study to determine the best options for locating fire stations in the city. But first, Vice Mayor Kreger noted, the Fire Department must submit their master plan that was initially due by December 2014.

Commissioners enlisted the help of the Main Street Program to solicit interest in the Vuturo Building and project management for the pedestrian walkway between Ash and Centre Streets.

The Post Office Building.  Martin said that he has contacted the city’s lobbyist for some answers on the status of this building.  He said that with additional staff, the city would need additional space.  If the building will become available within 3 years, the city can probably hold off on seeking new space.  But if it will take ten years to obtain the building, the city will need to explore other options.

Density.  Mayor Miller asked if there is a way to limit population growth, in response to citizen concerns over unbridled population growth.  Commissioner Ross reminded commissioners that in connection with the recent increase approved for downtown density, the FBCC planned to revisit parking and setback requirements for the same area.  Vice Mayor Kreger suggested that annexation strategies need to be studied.  Ross added that any properties being annexed into the city should be required to conform to city development rules.

City staffing. Commissioner Chapman noted that currently there is a surplus of $161K in the city’s salary budget.  He suggested that the city should take steps to increase hours of part time staff or hire additional staff to help get the city’s work done.