The question many citizens may pose after reading this piece is:  At what point does public input help/hinder progress?

The CRA Advisory Board (CRAAB) was rejuvenated during the first recent meeting of the Community Redevelopment Agency (CRA) on October 19, 2021.  Authorized by Fernandina Beach Resolution 2005-113, the CRA oversees and directs projects within the Community Development Area along the Amelia Riverfront extending to parts of North 2nd Street.  The Fernandina Beach City Commission (FBCC) at the time it established the CRA appointed itself to serve as the governing body.  At Tuesday’s meeting, they elected Mayor Mike Lednovich and Vice Mayor Len Kreger to serve as Chair and Vice Chair of the CRA.

As with the waterfront park, there have been multiple committees, surveys, and meetings held by successive FBCCs since 2005 to determine the best way to redevelop the Amelia Riverfront.  Just as it appeared that plans were coalescing to move forward on significant areas of the CRA Plan, the FBCC apparently agreed with Commissioner Bradley Bean that yet more public input was needed.

City Clerk Caroline Best was tasked with soliciting applications for FBCC consideration.  The CRA/FBCC will review the applications against the criteria for membership laid out in Resolution 2012-118. 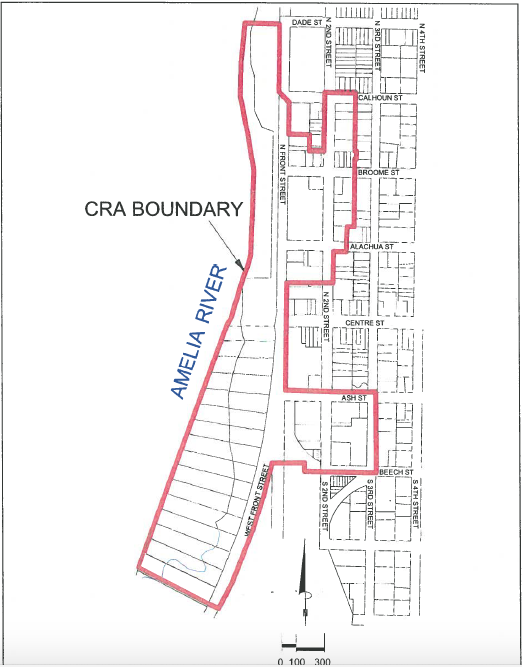 Located along the City’s waterfront, the Community Redevelopment Area (CRA) is made up of around 80 parcels, with 12 owned by the City of Fernandina Beach and two owned by the Ocean Highway and Port Authority (OHPA).  It includes working waterfront businesses, vacant and underutilized parcels, the City’s marina, and transitional commercial uses.  The Plan was adopted by the FBCC in 2005 following significant work by City planners and consultants as well as extensive public input.

The CRA vision statement, established during the Community Charrette Process:

Commissioner Chip Ross highlighted the primary goals of the CRA during the CRA meeting on October 18, 2021.  He showed pictures of how various portions of the waterfront looked in 2004 and how they look today.  He declared that not much has changed.

City Manager Dale Martin explained that the CRA was established in 2005 to create a funding mechanism for improvements along the waterfront.  The properties included in the CRA have a baseline value set for property taxes.  Any increase in value taxes do not flow to the City or the County.  Instead they remain in a CRA fund.  “It doesn’t change taxes for those parcels.  It’s just a redistribution of taxes.  The baseline tax year was reset due to the economic downturn a few years ago, and only recently have funds begun to build up in the [CRA fund].”

The CRA Fund presently has $55,624. Staff anticipates Fiscal Year 2020-2021 tax revenue of approximately $79,863.  Martin said that this year the fund will be used to pay debt service for the opening of the Alachua Rail Crossing.

Jack Knocke, representing the citizen group Common Sense, addressed the FBCC, suggesting that the City should take a wider view of the CRA beyond properties owned by the City.  He said that Common Sense has met with property owners north of City property along the waterfront, suggesting that a City meeting with those property owners as a group might yield positive results.  In response to a question from Mayor Mike Lednovich, Knocke said that the group would like to be involved in creating a “cohesive” waterfront, adding that there was interest in a restaurant, a gas station and a museum.

City Manager Martin said that the City had contacted waterfront property owners by letter on August 15, 2018, to advise them that under the Stan Mayfield Working Waterfronts Florida Forever Grant Program state funds could be available for land purchase to advance waterfront industries of for “other purposes that promote and educate the public about economic, cultural and historic heritage of Florida’s traditional working waterfronts, including the marketing of the seafood and aquaculture industries.”  The first requirement was for landowners to consider an offer to sell their property at the appraised value.  Each land owner rejected the offer, so the grant could not be pursued.

Commissioner Chip Ross said that one of the factors limiting development on the privately owned parcels is building height (30 feet) and 15-foot setback requirements.  Ross dismissed the idea of building a bulkhead and backfilling behind it to create more usable land.  He said that the U.S. Army Corps of Engineers agreed that approval could be requested for such a plan, but that they had not approved any plans for projects like this for 20 years.

Following his slide presentation showing then and now photos of CRA properties, Ross presented a list of 11 infrastructure requirements gathered from citizens over the years to provide for a walkable, enjoyable waterfront. 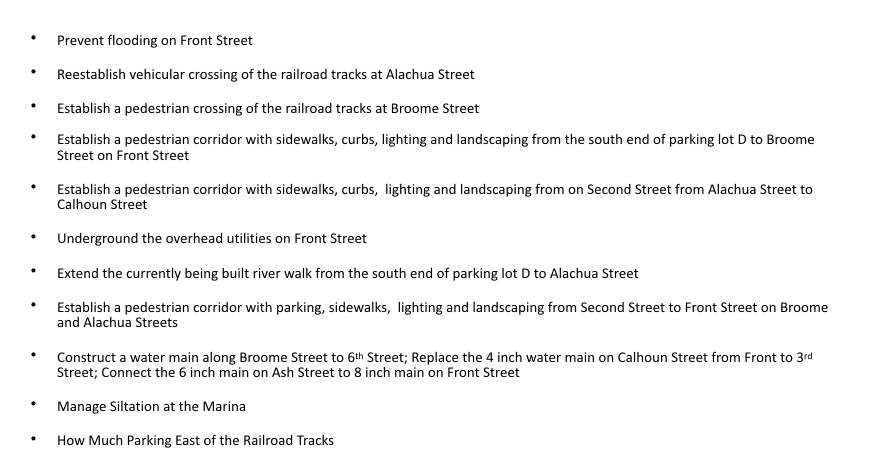 Commissioner Bradley Bean pointed out that development in progress along North 2nd Street is bringing more money into the CRA fund.  “The future is coming,” he said.  “North 2nd Street is going to be a very walkable corridor and we need to be ready for that.”  Bean added that he would feel uncomfortable making decisions about all the points on Ross’ list because of the tremendous impacts of these projects on downtown and the waterfront.  “I feel that we need citizen input,” he said, “to make sure these needs are met and that they have the ‘Fernandina feel.’  Let’s go ahead and restart the Citizen Advisory Board (CRAAB).  We have citizens in our community who are willing to help, so let them run down all these bullet points.  Maybe there is a way we can negotiate with the private property owners.”

Mayor Lednovich asked Commissioners for their input on resurrecting the CRAAB.  Kreger said he had no problem with that, but reminded commissioners that many points on Ross’ list are either already underway or in need of technical assistance from engineers and the Utility Department.

Sturges reminded Commissioners that since the formation of the first CRAAB, Fernandina Beach Main Street has come into existence.  That group is tackling some of these same issues, since they also have some responsibility within the CRA.  “Main Street will be coming up with changes to reinforce the feel of downtown as far as sidewalks, street lights.  I assume we would bring that same texture and feel to the waterfront,” Sturges said.  He cited the expertise of Planning staff in these areas as well, while supporting opening up the process for additional citizen input.

Lednovich said that not much has been done since the CRA was created, but Ross disagreed, citing the resiliency work on the waterfront, the river walk, the decision to open Alachua Street, the sidewalk on the west side of the railroad north of Centre Street to Ash.  Ross credited the current and former FBCCs, because most of the advances have occurred in the last 3 years.

Lednovich indicated his preference for charging the CRAAB with updating the CRA plan, which was written in 2004.  He also wanted them to set specific objectives and timelines for presentation to the FBCC.

Kreger allowed that he had no problem with Lednovich’s dictate, adding that he was more concerned about the area north of City property.  He said he’d like to see just what can be done with that property.

Ross allowed that he was not against resurrecting CRAAB, but from his past experience attending their meetings, “all they did was talk, talk, talk.”  Ross said he wants to see something done.  “Citizens have been meeting about these things for 20-30 years,” he said.

Kreger said that the City is already moving on the infrastructure needs.  If citizens and property owners want to talk about the other things on the list, Kreger had no problem, but he advised that “livability issues” could not be addressed until infrastructure needs were met.

Commissioner David Sturges expressed support for the actions that improve stormwater and both pedestrian and vehicular circulation downtown.  Ross added that these same points are cited by property owners as ways to make their property more marketable.

City Manager Martin said that with the opening of the Alachua Street crossing, there would be sidewalks and landscaping reflecting the new standard for the rest of downtown.  “We are on the cusp of going out to bid on those projects, so in some ways me might be further ahead with the work Main Street has been doing in this regard.  Should we slow down the process to await more input from CRAAB?  Be aware that when we are ready to go ahead on Alachua Street, we will be bringing forward a proposal that reflects staff and Main Street input.  Main Street is already fully engaged in this effort.”

Sturges said that his intent is not to interfere with work that Main Street is doing, but to reach out to the private property owners along the waterfront.  His goal would be to get their buy in with the City to create a uniformly designed working waterfront with a boardwalk.  He said, “We definitely need to improve Alachua Street, and I don’t want to slow down that project.  If the CRAAB can provide input quickly, that would be fine, but I don’t want to stop progress.”

After considerable discussion over a meeting schedule, the board agreed to meet again prior to the first FBCC meeting in January to discuss progress of both the CRAAB deliberations and decisions with respect to Atlantic Seafood and Brett’s.

Following discussion, Ross suggested that Lisa Finkelstein, Main Street’s Executive Director, would be an ideal choice to chair the CRAAB due to all the work that has either already been completed or is in progress.  Finkelstein agreed to consider the suggestion.

Why the first CRAAB faded away

Despite meaningful intentions and work, not much happened within the CRA until recently.  There are two main reasons for that:  political intransigence as FBCC members changed directions over the years, the bursting real estate bubble, and an absence of funds.  Members of the CRA Advisory Board (CRAAB) became frustrated and gradually faded away to the point when the CRAAB couldn’t hold meetings because it couldn’t raise a quorum.

When contacted for background, Arlene Filkoff, the last chair of the CRAAB, agreed that members of the committee became disheartened when it appeared that the FBCC, (no matter which one) showed little interest in pursuit of their recommendations.

She added, “As an advisory board, CRAAB had no teeth.  I scheduled monthly updates to the commission while serving as Chair.  The purpose was to keep it in front of them.  And to keep them thinking about what value infrastructure in that area could have.  Our focus was not really as much on development in that area as on doing the work of government and developing infrastructure that would make repurposing, preservation, etc., more attractive.

“I believe there is a great deal of misunderstanding regarding the concept of the CRA.  Many  associated the CRA with Forward Fernandina which, was another greatly misunderstood project.  One of the primary legs of that project was to infuse some money into the CRA in order to do some of the necessary infrastructure improvements.  The most common complaint I hear about the CRA is that having it will make other areas’ taxes go up.  Not true, but I’ve never heard that rebutted in a public forum other than CRAAB meetings.”

How to apply for membership on the CRAAB

To apply to serve on the revitalized CRAAB, interested parties should be aware of the membership criteria set by the FBCC in Resolution 2012-118:

Applications may be downloaded or obtained in person from the office of the Fernandina Beach City Clerk.  For more information, call (904) 310-3115.

The Fernandina Observer covered CRAAB meetings over the years.  Type in CRAAB in the search field on the home page to find more articles.