The Fernandina Beach City Commission (FBCC) decided to scrap its usual pre regular meeting workshop on April 19, 2020.  The FBCC substituted a meeting of the Community Redevelopment Agency (CRA) for the same time period.  The City Commissioners serve as the members of the CRA.  Invited to participate in the meeting and to make a presentation were members of the CRA Advisory Board (CRAAB).

Support the objectives and strategies of the 2005 CRA Plan

Knocke indicated that CRAAB is receiving briefings from a wide variety of City and State offices during April and May.  Private property owners have been invited to a workshop with CRAAB in June.  Following that, CRAAB will work on developing a prioritized action plan to present to the CRA Board/FBCC in July.

Knocke sought comment and validation of CRAAB’s goals and any future direction of the CRA/FBCC.

Commissioners peppered Knocke with questions during his presentation.

Mayor Mike Lednovich asked if CRAAB has received responses from any of the CRA property owners in response to a letter sent to them in March.  Knocke said no.

Commissioner Chip Ross presented a list of CRA property owners as compiled by the Nassau County Property Appraiser.  He cited 4 undeveloped properties west of the railroad tracks and 4 other properties.  “So we are talking eight people?” Ross asked.   Knocke appeared unclear as to names of those property owners and when the letter was sent from the City, but he indicated that CRAAB hopes to meet with those owners in an interactive session in June. 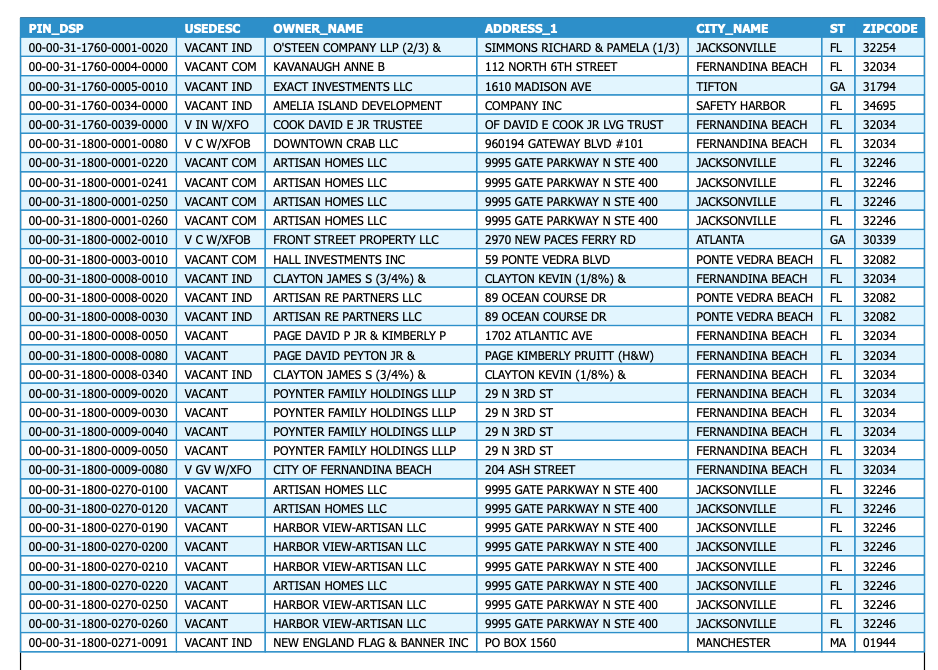 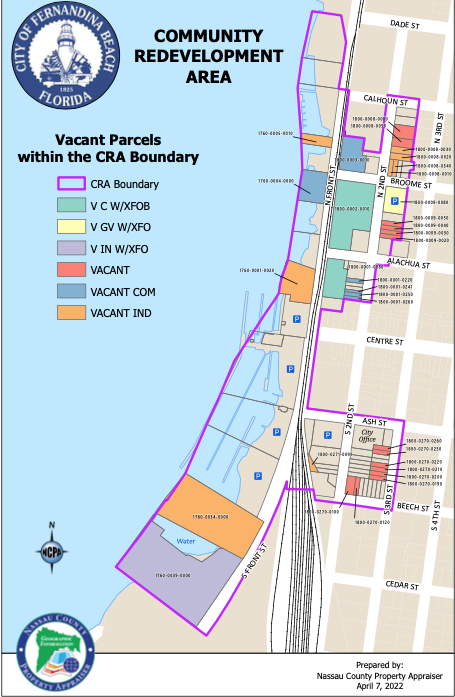 Knocke said it was his sense that the property owners first wanted to meet among themselves and develop a list of actions desired to help them develop their properties.

Knocke said that one of the themes that seems to run through conversations that he has personally had with CRA property owners over the past year is “I don’t trust the City. I’m not sure what the City plans to do.”  He cited examples of failed eminent domain action and proposing a seawall to skirt private property.  “We are trying to get a positive message out there that we want to work with private property owners,” Knocke said.

Ross said that he has talked with almost all the property owners and, “They all say the same thing:  The City needs to put in the infrastructure, and that would make us happy.  Have you heard something different?”

Knocke said that property owners are sharing other thoughts with him.  He said that the owners want to develop their property, but they want the City to work with them.  He sensed a feeling of hopelessness among the owners and expressed his desire to change this through work of CRAAB.

Knocke also raised questions about the possibility of opening up previous debt incurred to finance the Alachua railroad crossing and the new fire station at the airport to assist in waterfront development.  Ross opposed such a move, stating that the FBCC has already voted to commit that money.  “Why would we be reopening another can of worms?” Ross asked.  “Why are we spending any time on this when it’s already done?”

Knocke said he was just suggesting analyzing existing debt to see if it could be restructured.

Vice Mayor Len Kreger suggested that CRAAB concentrate on developing action plans to implement priorities before tackling the issue of debt.  “Once you identify what the projects are, and you add cost estimates, you can establish priorities based upon which financing is available,” Kreger said.

Knocke concluded his presentation asking Commissioners if they supported the goals he had outlined and if they had anything else to add.

Kreger emphasized the need to concentrate on identifying projects, adding that he agreed with Ross that most of the infrastructure work is underway.  He added that there is a difference between what City representatives have been hearing from property owners and what Knocke claimed they have told him.  “We are not going to make progress until we all get on the same page,” Kreger said.

Commissioner David Sturges agreed that provision of infrastructure in the CRA is well underway. “We want to see as much business on that north end [of the CRA] as possible in my opinion,” he said.  “We don’t want to see residential — we want light business and what’s appropriate.  We’ll figure out financing after we see the plans and what property owners want to do.”

Ross, who has attended the last two CRAAB meetings, addressed some issues regarding land use that had been raised by CRAAB members.  He cited Land Development Code uses for the waterfront property.  Neither residential nor hotel accommodation are permitted.  He said he would not favor adding these uses to the waterfront property.  He asked other Commissioners to weigh in.

Kreger said that there is not much room to build anything on the privately owned lots, but he believed the CRAAB could look into any possible uses for the property.  “You are an advisory board, so you can look into anything you want.  Let’s not tie their hands.  The Commission will make any necessary decisions,” Kreger said.

Knocke asked why the Commission was opposed to residential along the river.  Mayor Lednovich said he was against increasing density.  “This City is dense enough,”  he said.  “Plus that waterfront view.  I believe we are selling out to special interests if we add residential.”

Ross next raised the matter of building height along the waterfront.  West of the railroad buildings have a 30-foot height requirement.  Previous efforts to increase that by 5 feet were voted down.  “If I were a property owner, that would be the number one thing I would be asking for,” Ross said. “Is that dead on arrival if it comes to us as a recommendation?  There is no point for the CRAAB to be spending time on recommendations that are dead on arrival.  That frustrates them and frustrates us.  At this time I am opposed to increasing building height in that area.”

Kreger agreed with Ross, but Sturges said he is not opposed to considering a 5-foot increase in building height.

Ross next spoke to view corridors, which the city has endeavored to maintain at the west end of east-west streets.

Sturges said he wanted to wait to see which recommendations come forward from property owners before discussing view corridors.  Sturges said that Ross was “putting the cart before the horse” by bringing up matters like view corridors, building height and land use.

Ross responded by citing the frustrations expressed by many City advisory board members when they have spent time and effort in putting together recommendations that the Commission rejects.  “The point is, we don’t give them any direction ahead of time.  If something is not going to fly when it reaches the FBCC, why spend time working on it?” Ross asked rhetorically.  “I hear over and over again: ‘They ask us for our opinion, but then they don’t listen to us.’ That resonates with me.”

“CRAAB came here asking for direction,” Ross said.  “So these are some of the things they probably shouldn’t spend a lot of time on because they won’t get a lot of traction when they come to us for action.”

Knocke expressed frustration in working under the Open Meetings Law.  During an exchange with Commissioner Ross there was some clarification:  while the law prohibits two or more members of the same board from discussing board business outside of a noticed meeting, nothing prevents individual advisory board members from scheduling meetings with City staff at any time to gather information or ask question.

From previous interactions I had over a decade ago, many of the private riverfront property owners’ “wish” was for the City to build a seawall out into the river so they could backfill their uplands to created enough land to actually build a structure on it. Of course they wanted the City’s taxpayers to bear the total cost of such a multi-million dollar project under the justification that their vacant land had been paying tens of thousands in taxes every year for 40 – 50 years.
Personally, except for a few parcels with sufficient uplands (i.e. Cook, Simmons and city parcels), I don’t understand the current valuations on these properties. The parcel just south of Lot D has a waterway running through the middle of it and is wetlands so it can’t be developed at all. There is such a disconnect between the County property appraiser’s valuation and the property owner’s valuation. For example the O’Steen (Simmons) property just north of Lot A is on the county property records books at .88 acres with a valuation of $756,000 and assessed valuation of $390,000. During the recent ill-fated effort by the city to acquire the property through eminent domain, the property owner hired an appraisal firm that came back with a valuation of $2.3 million causing the City to abandon its efforts. At the far north end before reaching the Port, Beacon Fisheries purchased in January for $3.25 million a 1.37 acre parcel that has valuation and assessed valuation of $671,000.
A complex issue for sure that will likely continue to pit the property owners against the city taxpayers