The Fernandina Beach City Marina has been the cause of heartburn for the City, local residents, and boaters alike over the last four years, following the disruption to operations and finances in the wake of Hurricane Matthew.  Westrec has been operating the City Marina since January 15, 2010, when it was selected by the Fernandina Beach City Commission (FBCC) following an extensive search.  However, relations between the City and Westrec have come under strain in the past year as more issues over marina maintenance have arisen.

Earlier this year, the City of Fernandina Beach issued Request for Proposal #2020-02 for Managing and/or Leasing Marina Facilities in an attempt to determine the interest of other firms in operating the Fernandina Harbor Marina.

Westrec was provided the opportunity to review the submissions and offer a proposal.

Stantec Consulting Services, Inc. was contracted to provide a Financial Review of the marina management proposals by evaluating and ranking the proposals to assist in the determination of which proposal best suited the financial interests of the City. All of the proposals were projections of revenues and expenses: none of the management teams offered guarantees of the revenues or projections. The Stantec review was intended to provide a comparison of the projected information as presented by each management team.  The Stantec report ranked the Oasis Marinas proposal in the best interests of the City.

All proposals, the Westrec response, and the Stantec report were presented to the Marina Advisory Board (MAB) for consideration at the MAB June 22 meeting. Prior to the meeting, and based upon the Stantec review, preliminary discussions were conducted with Oasis Marinas officials, and an invitation to introduce themselves at the June 22 Marina Advisory Board meeting was extended. Westrec officials declined to participate at the June 22 MAB meeting. The MAB, in general, reiterated support for a previous endorsement to allow Westrec to operate for an entire year with a fully functioning facility, following Matthew-related repairs.

The City conducted additional discussions with references and others familiar with Oasis Marinas operations. The City Manager reported that one local resident, with previous time in Annapolis and familiar with Oasis Marinas operations, offered support for Oasis Marinas, specifically stating, “I am currently a slipholder at FHM and resident of Fernandina Beach, but am from Annapolis. I’ve stayed at several Oasis Marinas over the years and am aware of the quality service you all provide. Would like to see Oasis manage FHM and plan to encourage our city commissioners to that effect. If there’s anything I can do for you on the ground here, please let me know.”

City Manager Dale Martin recommended to the FBCC at their July 21, 2020 meeting that they award Oasis Marinas RFP 2020-02 for managing and/or leasing the City Marina and allow Martin to move forward with negotiating a contract.  Westrec would then receive the required 90-day notice of the City’s intent to terminate their contract.

When the question of moving forward with Oasis was put before the FBCC on July 21, 2020, Commissioners voted 4-1 to approve the action.  Commissioner Chip Ross, reported to the other Commissioners and the public that he had spent significant time investigating Oasis and the other RFP respondents.  He said that he was convinced that Oasis had accurately represented their experience and that they were capable of performing the kind of work the City required of a marina operator.  He checked references and talked with other entities that had experience working with Oasis.

Oasis Marinas management team attended the meeting and expressed willingness to engage with commissioners on any questions they might have.

Commissioner Mike Lednovich asked which of the 30 properties Oasis manages had not been able to meet revenue expectations.  CEO and Founder Dan Cowens replied that difficulties occurred 3 times because promised improvements from property owners did not materialize.  He added that in Year One the other properties under their management have seen revenues increase a minimum 30 percent. 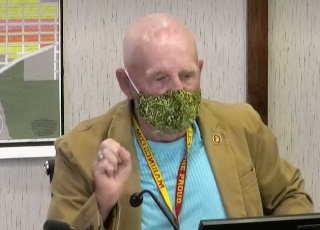 But then it was Vice Mayor Len Kreger’s turn to speak.  Kreger had no criticism of Oasis, but significant criticism over the process that was used to recommend them.  He cited language from the RFP that laid out a process that included an Evaluation Committee to evaluate technical capabilities, experience and financial components. He said that no such committee had been formed and that it appeared that Oasis was being recommended solely on the basis on the Stantec financial analysis.

”Again, It seems to me, we do an RFP on behalf of the City, and it goes off the rails,” Kreger said.  “There should have been an Evaluation Committee, all of the respondents could have been invited, and we could have questioned them also.  I read Oasis’ proposal, and it looks like they have done great work.  But I would have liked to see the City follow through with what the RFP said we were going to do.  I won’t support this proposal tonight.”

Commissioner Chip Ross shared his research into Oasis with Commissioners and the audience.  He also reminded Commissioners how the marina management issue had gotten to the current state.  “We gave [the City Manager] the flexibility to negotiate a new contract,” Ross said.  Ross reported that he had contacted 6 marinas that Oasis operates to see how Oasis handles marketing to attract transient boaters.  He found that Oasis was “far superior” to current marketing efforts led by Westrec.  He also looked into level of service that Oasis provides.  Ross cited positive reports from marina owners and boaters.

Ross said he was “very comfortable” with Martin’s recommendation and credited the City Manager with great hiring decisions during his time with the City.  Ross moved to approve the action and was seconded by Lednovich.

Kreger continued to express concerns over the failure to follow the RFP.

Genece Minshew, a candidate for the fall FBCC races, spoke from the audience.  She had previously emailed a lengthy letter of concern to Commissioners regarding this action.  She concurred with Kreger’s criticism of the process.  With respect to Oasis, she said, “These folks put on a great presentation [at an earlier meeting] and I’m sure that they do a great job operating marinas.  But that’s not the point I’m trying to make.  The City has not done the proper due diligence they need to do before you award a multi million dollar contract.  It is very disappointing to me that you would award this RFP tonight without doing that due diligence.”

Minshew also expressed her disappointment that despite sending each commissioner a detailed letter with suggestions on how to correct the problem, she had only been contacted by Ross and Kreger to follow up.  She said that she believed that any citizen who takes the time to forward input should at least be accorded a thank you.  [At the end of the meeting, Commissioner Lednovich apologized to Minshew for not acknowledging her letter.]

Minshew asked that the vote be postponed until the appropriate procedures could be followed.  There was no reaction from Commissioners, and Mayor John Miller called the vote.  The item passed on a 4-1 vote, with only Kreger voting in opposition.

The morning after the meeting, City Manager Dale Martin sent an email to the Commissioners which he later forwarded to the media in which he accepted responsibility for not following the selection process described in the Request for Proposals for the Marina Management/Lease effort. He also apologized for that misstep.  Martin wrote,

“In an effort to correct that error, I am going to appoint an Evaluation Team as indicated in the original Request for Qualifications. The members of the Evaluation Team will be in line with the suggestion offered by Ms. Genece Minshew in her previous correspondence to you: the City Attorney, the Comptroller, and the Airport Manager. Documents related to the review of the proposals were included in last night’s agenda packet, to which the Evaluation Team has access.