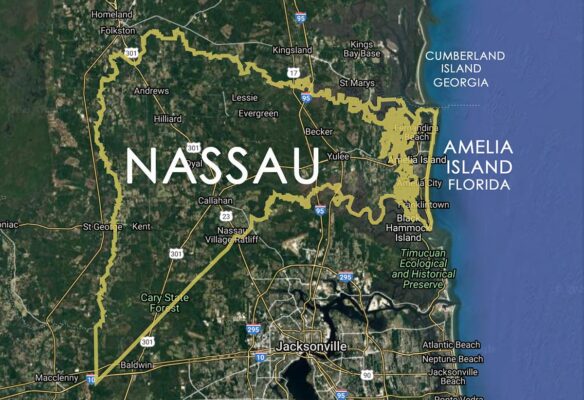 “Nassau County is one of the few counties in the whole state that does not have a mechanism to pay for land conservation, and Nassau County lags many of the other counties in the amount of land we’ve conserved,” Amelia Tree Conservancy founder Lyn Pannone said to City Commissioners at their latest meeting.

“But with this referendum, we can change that. It truly is, ‘Protect Nassau, now or never,’ and I thank you for supporting this resolution.”

The Commission voted 4-1 to back the bonds.

“It’s been a long, two-year process,” said Pam Hart of Amelia Forever and the Protect Nassau Now or Never PAC. “It has not taken place overnight. We have worked with the Trust for Public Land, the North Florida Land Trust. And Amelia Forever and the Amelia Tree Conservancy nominated numerous properties, but we were very surprised that citizens also nominated a number of parcels to be conserved. Actually, 750 in all, so the committee has had quite a process prioritizing parcels.”

If voters approve the bond plan on the Nov. 8 ballot, it will allow Nassau County to issue general obligation bonds up to $30 million to fund activities led by the county’s Conservation Land Acquisition and Management program.

“Those funds would be used to purchase land from willing sellers to be protected from development, or to buy development rights on working farms and forests and other lands that would remain on the tax rolls in private ownership and management,” 1000 Friends of Florida President Paul Owens said in a statement.

The group notes only 7% of county land is protected from development, as opposed to the state average of 29%.

“We urge Nassau County citizens to make a timely investment in their environment, economy and quality of life by voting ‘yes’ for bonds on their Nov. 8 ballot,” Owens said.

Fernandina Beach Vice Mayor Len Kreger, who was the first person to nominate properties for this process, voted against city support of the bond proposal.

“I strongly support conservation, but I will not vote on this resolution,” Kreger said. “I’m concerned this resolution was placed on there with really insufficient information that we can provide to the public that we supposedly are supporting the 25 units, the Top 25, etc. And I was also concerned the city is not addressing the school district referendum, nor the constitutional referendums.”

In the name of consistency, he said, they should weigh in on all of these things or none at all, and he voted for none at all.

This is a critically important referendum for quality of life, temperature moderation, stormwater management, water quality, the future of working lands, recreation, wildlife habitat and so many other aspects of our community. County commissioners requested staff to research the need and feasibility of land conservation in Nassau County in 2018 and the resulting Conservation Land Acquisition and Management (CLAM) Program, a collaborative effort of the County and North Florida Land Trust, provides a solid foundation for the County to move forward. In order to acquire grants and other state, federal and private funding, the County must have a pool of funds that can be leveraged. According to the Trust for Public Land, the cost per household will be minimal, estimated at an average of $35 per year per household, based on median property values, yet the benefits are far greater.

As pointed out, many other counties in Florida have recognized the importance of land conservation and have voted to support such referenda. We can do this too!