OHPA Does the Right Thing! Mayor is on Board 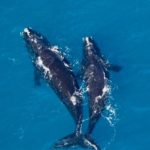 It’s been a while since we’ve seen agreement between these two parties so perhaps the tides are shifting.

At its Oct. 18 meeting, the Fernandina Beach City Commission proclaimed November North Atlantic Right Whale Month. Mayor Mike Lednovich gave a big shoutout to our local all-volunteer group of Amelia Island Whale Ambassadors for their steadfast commitment to tirelessly work at reversing the decline of the right whale population through both education and action.

North Atlantic right whales are a federally protected species—considered the most endangered of the large whales—with only 336 left at last count and fewer than 70 calving females. These right whales live in the North Atlantic coastal waters and migrate seasonally to the warmer waters from South Carolina to North Florida in order to calve their young. As these are the only known calving areas, the waters off Amelia Island are critical in protecting the mothers and their nursing calves from November through April.

Originally prized for the high whale oil content, these gentle giants are docile and slow moving, creating an easy target for the whale hunters of yore. Called the “right whale” to hunt since it was a slow target that then floated after being killed, they were nearly hunted to extinction in the 1890s. Today their importance is in helping to keep the marine ecosystem balanced by redistributing nutrients where they travel.

Over the years the threat of the hunter has been replaced by fast moving vessels. Since 2017 there has been an unusually high mortality rate of North Atlantic right whales, with the leading cause attributed to vessel strikes. The whales are hard to spot, travel near the water’s surface to eat and nurse, and cannot easily move out of the path of an oncoming boat or ship. The only solution is for the vessels to slow down.

As such, NOAA has proposed an amendment to the vessel strike reduction rule to cover the Southeast calving area. (See full rule at end of article). The current rule has a 10-knot limit for vessels greater than 65 feet in length. The amendment decreases the length to 35 feet and would be in effect during the calving season from Nov. 15-April 15 each year.

There has been pushback from the American (harbor) Pilots Association and the Chamber of Shipping of America, claiming the slowdown is dangerous for the harbor pilots. These groups have requested local agencies and governments take a position and submit formal letters opposing the amendment.

However, Ocean Highway and Port Authority (OHPA) chair Danny Fullwood stood firm against writing a letter that would denounce the amendment. Instead, he acknowledged the large local contingency of right whale enthusiasts and said, “Personally I don’t think we need to write a letter.” In not taking a position, OHPA joined countless local volunteers in the goal of trying to help reverse the trend of decline to extinction of the right whales and recognized the community-wide effort.

When a species becomes endangered, it is a sign that the ecosystem is slowly falling apart. Each species that is lost triggers the loss of other species within its ecosystem. Humans depend on healthy ecosystems to purify our environment.

And we depend on each other to do the RIGHT thing in promoting, preserving, protecting this species and the habitat it seasonally calls home.

Thank you OHPA and City Commission for your recent actions to this effect.

Hooked and wondering how you can get involved or learn more?

Join over 31,000 others and send your comments regarding the speed amendment to the Federal Register before October 31.  https://www.federalregister.gov/documents/2022/08/01/2022-16211/amendments-to-the-north-atlantic-right-whale-vessel-strike-reduction-rule

Thank you Tammi. You are exactly right that everyone’s support is needed to save right whale’s from extinction. The Nov 5th/6th Right Whale Festival is the place to learn how. And for an ongoing focus, join the Amelia Island Whale Ambassadors on Facebook.

Thank you to OHPA, the City Commissioners and Tammi Kosack!
Time is running out for the rare Right Whale – but conservationists and the fishing/shipping industries are clashing over solutions. Can the species be saved from extinction? Check out this new podcast from BBC.
https://www.bbc.co.uk/sounds/brand/p0d2nb2x

Excellent news. Thank you, OPHA, Commissioners and Tammi. The future of all species, including our own, depends on our choices, the decisions we make now.

Great Article. Should be a great Festival!!
Let’s get our congress working on this. The only way it will change with federal help!! Write them now and again in January!! Make this an issue!!

Thank you to OHPA, the City Commissioners, Tammi Kosack, and the Observer for publishing this enlightening article. I appreciate the links to additional information and how to get involved. Conservation and preservation of our plants and animals is critically important for now and future generations!

Thanks for this informative article.

May we NEVER have to say “I remember when Right Whales graced our waters.”

The more I learn about our magnificent right whales, the more I appreciate their vitally important place in our ocean ecosystem. I truly admire and thank those who are working so hard to protect them.

At last there is evidence that people can do the RIGHT thing. Thank you, Tammi, for your articulate presentation of the facts as well as the vital need for us to work together. Thank you, Chair Fullwood for your courage in leadership on this issue. Sometimes silence truly is golden. Thank you, volunteers, for your continued efforts to protect the Right Whales. Voices like this one must be heard, celebrating all that is possible. When we give time to learning and leading, doing the RIGHT thing is more than possible,

This objection by harbor pilots has been addressed in every revision of the CFR from the first submission. Personal safety has always been included in the federal mandated allowable speed protection zones. It’s a moot argument.

“(c) A vessel may operate at a speed necessary to maintain safe maneuvering speed instead of the required ten knots only if justified because the vessel is in an area where oceanographic, hydrographic and/or meteorological conditions severely restrict the maneuverability of the vessel and the need to operate at such speed is confirmed by the pilot on board or, when a vessel is not carrying a pilot, the master of the vessel. If a deviation from the ten-knot speed limit is necessary, the reasons for the deviation, the speed at which the vessel is operated, the latitude and longitude of the area, and the time and duration of such deviation shall be entered into the logbook of the vessel. The master of the vessel shall attest to the accuracy of the logbook entry by signing and dating it.”