The Fernandina Beach City Commission once again extended its mask mandate due to covid, this time until May 7, 2021.  And once again, Commissioners Bradley Bean and David Sturges opposed the extension, citing the rising number of vaccinated people in the community and the Governor’s refusal to allow penalties for violations of local mask mandates.  After a brief discussion the motion to extend passed on a 3-2 vote. 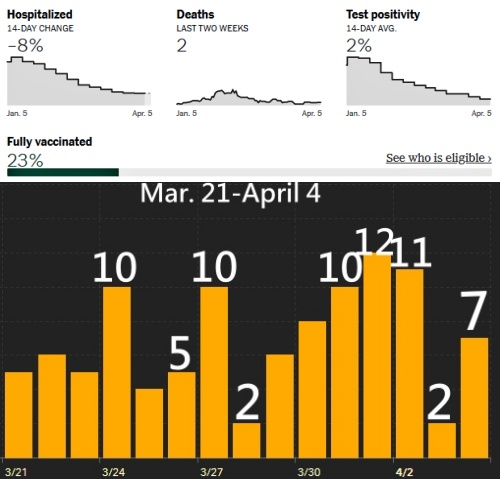 He stressed that as of the previous day only 23 percent of the Nassau County population had been vaccinated, leaving 77 percent as not protected.  “I think that says volumes about where are.”

Commissioner Bradley Bean related his positive experience in getting vaccinated, reminding viewers that as of yesterday all Floridians over the age of 16 are eligible to receive the vaccine.

Commissioner David Sturges noted that Nassau County covid cases are down and that Jacksonville has eliminated its mask mandate.  In iight of the increasing availability of vaccines and drop in the number of reported cases Sturges supported doing away with the mandate and letting individuals and businesses make their own decisions regarding the need for masks.

Vice Mayor Len Kreger said that there are currently 120 covid deaths in the County.  “I will support the mandate consistently as long as the CDC recommends masks,” Kreger said.  “We are certainly not out of the woods.”

Commissioner and ER doctor Chip Ross reported that Nassau County is still at a high risk of exposure to covid.  He said that he would go along with Baptist Hospital, which has a mask mandate as well as the Florida House and Senate, which also have mask mandates.  “I’m going to follow the Legislature and their lead,” he said.

Bean, who has been the most vocal opponent to the mask mandate since taking office in December, demanded to know if the FBCC was not prepared to remove the mandate now, when would they remove it.

Kreger said he would consider removing the mandate when the CDC removes its recommendations.  “There are people still dying; this is not the time to stop,” he said.  “Our numbers may well be lower than other places because we ARE continuing the mandate.”

Lednovich said to Bean, “The answer to the question is when science says it’s safe.  Three out of four people in this county are not vaccinated, and you want to take masks off?  I don’t think so.”

Commissioners did not discuss what many see as a fourth wave of the virus or the mutations that appear to lead to more virulent strains.

What speaks volumes is how many over 65 have been vaccinated……not the total population. 80% of the deaths are 65 and up. Add the 55 and up and you are at 93%. The risk of anything more serious than flu-like symptoms is very small under 55. The daily median age of “positives” has been in the 30’s quite a bit lately for Nassau.

Nassau county ditched the mandate months ago. Mayor Curry just ditched it for Duval last week. Bradley Bean is correct…..just what do you need to see to end the mask mandate?

I trust this will be the last extension. It’s going to be getting hot in May. Try working a long shift in the service industry with outside seating and a mask on.

Thanks to our Commissioners for doing the right thing and keeping the mask mandate. Fernandina’s leadership has helped reduce the number of cases in our community. We should stayed masked up till the health experts tell us it’s safe.

Thank you to those commissioners who voted to extend the wearing of masks in Fernandina. It is obvious they have the best interests of the people who live and visit here. Until more people get vaccinated in the county, masks should be worn. It’s the least we’ve been asked to do to stay safe.

If we were “following the science” we would be doing away with mask mandates just as we did away with lockdowns. We now have sufficient data, as shown in the 2 linked studies, that the efficacy of masks is questionable at best. From the second of the 2 linked articles:

There are situations, health care settings mainly or situations of extreme community prevalence with a lot of coughing and sneezing in public, where masks serve a useful purpose. Yet, people who insisted last spring that the epidemic would go away with mask mandates could not have been more wrong. Every consideration shows this.

Nearly all the masks we see people wearing are constructed to no standard, made of varying sorts of cloth, are poorly fitting, are worn with near complete disregard for effectiveness, reused who knows how many times, used for what else we know not, and are often completely open at the cheeks, nose, chin and beard. They appear mainly useful for making a person touch their face constantly.

How about experimental or observational evidence from the present pandemic? The only experimental evidence is consistent with the benefits being so small they cannot be distinguished from occurrence by chance. Probably no new experimental evidence will become available for the following reason: People have probably changed their behavior drastically during this pandemic leading to too many confounding factors to identify the effect of just one. As the epidemic wanes recruiting sufficient subjects for RTCs becomes difficult.

Masks mandates are not a risk free intervention. They have a poor effect of civil society, they absorb resources, they possibly carry health risks of their own, and they certainly contribute to mistaken notions of safety and risk. Masks seem to me like a solution to a political problem which should alone raise skepticism about all claims.

Some Observations On the Efficacy of Masks in a #COVID19 World – Watts Up With That?

As a follow up to my original post…..the county vaccine report shows 16,400 over age 65 folks have received one or two doses of the vaccine. I have heard anywhere from 20-23,000 people in Nassau are 65 or over. Using the higher 23K number yields a percentage of 71%……an astounding number in just 3 months! Using the Mayor’s total population percentage of 23% is not a valid perspective of where we are at, in my opinion.

Oh, I forgot! The cancelled Shrimp festival was scheduled for May 1st! Now I understand……

I would like to express my appreciation for the City Commission’ steadfastness in maintaining the mask mandate. Please continue to follow CDC regulations. Considering current rates, the spread of the variants throughout the country, and the lack of knowledge at this point in time regarding COVID long-haul impacts , it is not yet time to drop the mask mandate. The important aspect of this is the message our City is sending, not whether it is enforceable. We may be tired of this reality, but we need to be cautious. Our businesses will fare better if we have a reputation for protecting the health of our residents and visitors. From a personal perspective, I will say that the responsible behavior of City Commissioners and staff and that of most of our businesses has made a great deal of difference in enabling those of us on this island to live here comfortably during the past year, and we do appreciate that.