In recognizing the career and accomplishments of Command Sergeant Major U.S. Army (ret.) Theresa V. King, Fernandina Beach Mayor Mike Lednovich said, “Ms. King’s dedicated service is part of an unbroken chain of courageous compatriots who serve our great Nation with honor and distinction and who defend our way of life with integrity and commitment. In respectful recognition of the contributions Ms. King made to advance peace and freedom, it is our hallowed duty to recognize those who have shown courage in selfless service to our Country.”

On behalf of the City, Lednovich and Vice Mayor Len Kreger presented King with a Proclamation of Gratitude to “pay homage to her willingness to answer the call of duty and for her unwavering love of Country.”

King, a Fernandina Beach native, joined the Army in 1974 at the age of 18. Her military achievements were remarkable. In the 1970’s, African American women serving in the Armed Forces was not commonplace. Coupled with keen ability and significant command competencies, Ms. King quickly rose through the ranks based on exemplary performance. 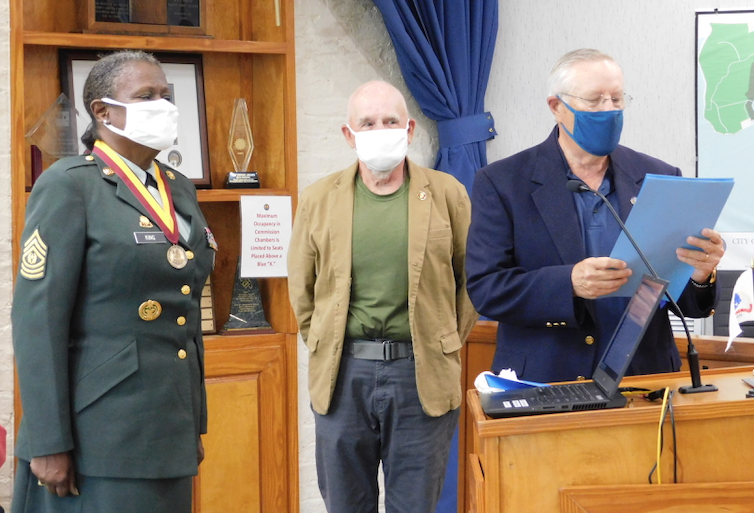 During her remarks following acceptance of the Proclamation and a standing ovation from Commissioners and audience members, she provided reminiscences on early years in Fernandina Beach as well as mentoring success in the Army.

She generated chuckles from the audience when she said that her 5th grade teacher had once told her she would never amount to anything.