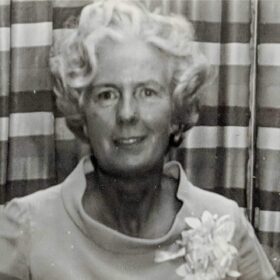 She was born Aug. 20, 1920 in Pilton, Somerset, England to Joseph Alfred Petvin and Rose (Salvage) Petvin. Her father was the son of landed gentry. Her mother was a household maid working for her husband’s father. She was the fifth oldest of nine brothers and sisters. Five Petvin brothers have predeceased her – Walwynn Arnold, Hartley Edwin, Charles Alfred “Fly,” Patrick Escourt, and Godfrey “Goff” Newman.

In her youth, Phyll worked on her family’s farm with her sisters, tending goats, milking, and gardening. At 15, she worked in a garment factory making milkman uniforms. Later, she helped the war effort by installing wire harnesses on military trucks coming from America.

Phyll married David Blacklock while he served in the British Army in Scotland. At the urging of a relative, who became their sponsor, she emigrated with her husband and young son to America in 1951, and briefly stayed with the sponsor in Fernandina Beach. They lived in Jacksonville, Fla. for three years, then moved back to Fernandina Beach where she lived for the remainder of her life. She loved her small house from which she could see the ocean – just across the road from the sponsor.

Phyll was active in St. Peter’s Episcopal Church in Fernandina Beach, with choir and flower guild duties. She volunteered as a nursing aide at the hospital on 8th Street, now gone. She loved walking on the beach, knitting, sewing, feeding the seagulls, fishing at the shore in front of her house and next to her husband, and traveling with her husband around the immediate northern states with local friends for short vacations. She helped her husband with his small piano tuning business.

The family will have a small celebration of life for Phyll in December. Her ashes will be spread over the ocean as were her husband’s many years ago. She would say, “When I go, I go to dad” (her husband).

Thanks for the very descriptive summary of Phyll’s life history.

I had the pleasure of being her roommate for a few days at Quality in Jan. Despite hearing problems we managed to have some conversations and I could tell she was a wonderful woman.

I had the pleasure of being her room mate at Quality for a few days in January. Despite hearing problems we had some great conversations and I could tell she was a wonderful woman. My condolences to her son and his wife.

Kathy, Thank you so much for your article. I have the fondest memories of “aunt” Phyllis. She was one of the first people I met in Fernandina in 1966. She helped me sew a dress for my mom for her birthday. If it’s possible I would love to attend her memorial.
Pat Gass

One of the great values of media is to inform with data and ...
wpDiscuz
4
0
Would love your thoughts, please comment.x
()
x
| Reply
Comment Author Info