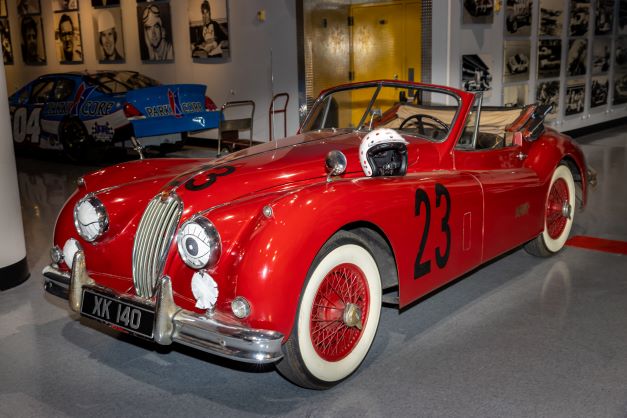 DAYTONA BEACH, Fla. – March 1, 2022 – The Motorcar Society of Vista, Calif. announced today that the 1956 Jaguar XK140 credited with inspiring the racing career of trailblazing journalist and motorsports icon Denise McCluggage arrived in Daytona Beach this weekend. The once-lost, now-found classic car will play a very special role in honoring an extraordinary woman who broke gender barriers with legendary charm and merit. Denise, who passed away in 2015, is being inducted posthumously into the Motorsports Hall of Fame of America on March 8 alongside a respected field of professionals honored across all American motorsports.

Nicknamed “Lady Leadfoot” by motorsports friends and affectionate rivals alike, Denise was a groundbreaking, award-winning journalist known for her fearless ambition, unwavering tenacity and natural athletic ability. A co-founder of Autoweek, she was the first journalist to be inducted into the Automotive Hall of Fame and the first female journalist to break the mid-century gender barrier in the Men Only Indianapolis 500 press box. At a time when women were not often allowed into racing pits or close to any of the action in sports dominated by men, Denise toppled gender barriers by participating in the sports she covered.

The Jaguar – believed to be permanently lost by racing enthusiasts and car historians alike – was miraculously discovered unaltered after sitting in a garage for nearly three decades. Barnaby Brokaw, president and founder of The Motorcar Society, considers the Jaguar to be one of the most significant “barn finds” of the decade. “This is the car that American sportsman Briggs Cunningham gave to Denise because he saw something special in her. She was fiercely competitive and highly respected by her peers on and off the racetrack,” said Brokaw. “Denise truly deserves the honor of being recognized by the Motorsports Hall of Fame, and it’s a special opportunity to bring her first racecar here.” 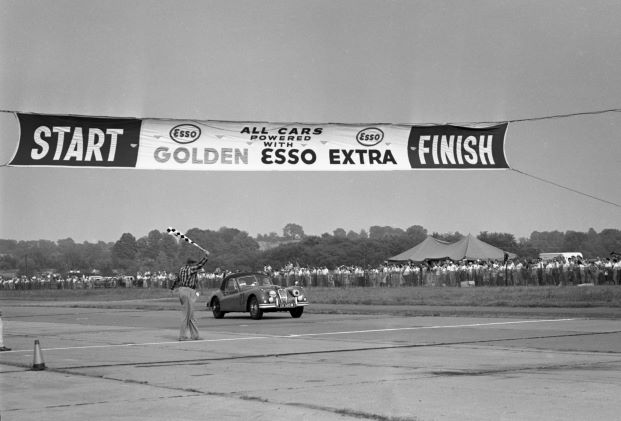 “Denise’s role in publishing and sustaining Autoweek, nee Competition Press, during its infancy not only kept the publication going, but played a vital role in the growth of sports car racing in America,” said George Levy, president of the Motorsports Hall of Fame of America. “This is the car that inspired all of that for Denise. This is the car that made her want to race.”

She made her racing debut in this Jaguar XK140 at an SCCA regional in Montgomery, New York in August of 1956 when she was just 29. She won the Ladies Race outright and placed well in the larger race against much more experienced competition. Denise was the first woman to win the feature sports-car event at Thompson Raceway in Connecticut with a Porsche RS in 1959, won the GT class at Sebring in Florida in 1961 with a Ferrari 250, and subsequently became the first female driver inducted into the Sebring International Raceway Hall of Fame.

“Denise was a pioneer and legend for her many talents — behind the wheel of a race car, brilliant writing and photography, and storytelling,” said highly decorated driver Lyn St. James, who will have the honor of presenting Denise for induction at the March 8 ceremony. “To be able to see this fabulous Jaguar that was one of her first racing cars come back to life is wonderful. Denise was someone who never let a challenge go unmet. Guts and brilliance were her mantra. It is a great honor for me to be able to help induct Denise McCluggage into the Motorsports Hall of Fame of America.”

“This is more than a racecar; it’s a piece of automotive history, with the original DNA of Denise and Briggs intact,” said Brokaw.

About The Motorcar Society

The Motorcar Society was established in 2006 with the aim of preserving automotive history for future generations. TMS founder Barnaby Brokaw helped establish the San Diego Automotive Museum in 1988 as well as the San Diego Historic Races in 1989. TMS independently produces and distributes documentaries and videos to the international automotive community at large.