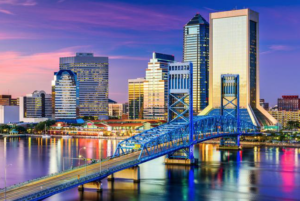 (The Center Square) – Nearly 60 percent of 600 Jacksonville residents who were surveyed said they do not want the Republican National Convention in their city in August because they fear it will accelerate the spread of COVID-19.

According to the June 17-18 RABA Research poll commissioned by Republican Voters Against Trump, 59 percent of those surveyed oppose President Donald Trump delivering his nomination speech before 15,000 people in VyStar Veterans Memorial Arena, the highlight of a three-day GOP gathering expected to draw 50,000 people from around the nation.

Only 39 percent said they support it.

The Republican National Committee in early June moved the “performative aspects” of the Aug. 24-27 convention – such as Trump’s acceptance speech – to Jacksonville from Charlotte, N.C.

Trump said North Carolina Gov. Roy Cooper “forced” him to cancel in Charlotte by requesting a “scaled-down” convention because of the COVID-19 emergency.

Although contractual agreements require some convention activities be staged in Charlotte, its performative aspects could draw up to 50,000 people and generate $100 million in economic impact for Jacksonville, a benefit championed by Mayor Lenny Curry and Gov. Ron DeSantis in lobbying to host the relocated event.

Curry said Sunday he will not issue a citywide mask order despite a sharp increase in COVID-19 cases. There were 183 new cases reported Sunday after three consecutive daily case counts topping 200.

Curry said people “are ignoring social distancing” but that issuing a mandatory mask order is “not an efficient use of resources.”

The mayor said there’s “quite a bit of time” before the RNC, suggesting “temperature checks and other protocols” will be implemented during the event.

According to Iowa-based RABA Research, however, the survey showed 57 percent of surveyed Jacksonville residents fear the convention would spur a COVID-19 outbreak, while 43 percent aren’t concerned.

Of the 600 respondents, 42 percent were Democrats and 36 percent were Republicans. Sixty-seven percent identified as college-educated.

While the survey cadre leans Democratic, it also may be reflective of a city that is becoming more progressive under the leadership of a conservative mayor who recently marched with Black Lives Matter supporters in a demonstration opposing police violence.

Jacksonville’s amended Human Rights Ordinance was passed in 2017 without Curry’s signature, who said it was unnecessary because the city doesn’t discriminate.

Implementation was stymied, however, when a court determined the bill’s flawed adoption needed “cure legislation” to be enacted.

Curry said if the Jacksonville City Council fixed the “technicality,” he’d sign the bill even though it “has been law for a number of years.” He did so June 15 without comment.

The city council soon will consider a bill changing the name of Hemming Park near city hall to James Weldon Johnson Park.

Johnson was a Harlem Renaissance poet, writer and Jacksonville native who served as NAACP executive secretary from 1920-30.