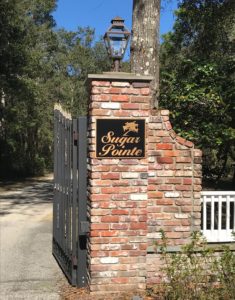 A spectacular new venue is now available for weddings, family reunions and fundraisers, private parties, corporate retreats and other special events. Beautifully situated on the Bells River, it is a secluded 48-acre property which includes a pier and boathouse, a spring-fed fully-stocked pond, a party barn complete with a 1500 square foot hardwood dance floor in addition to a stage and deck. The estate also houses a luxurious cottage, designed in the time-honored Southern tradition of low country living. Impeccably appointed, it was featured in Amelia Home and Design shortly after its completion in 2007.

The property goes by the name of the Sugar Pointe Estate and is located just minutes from Jacksonville and an even shorter distance from Amelia Island. The address is 88000 Sugar Pointe Lane in Yulee, Florida. 32097.

This estate offers incredible views in every direction — everywhere you look. And each view is perhaps even better than the last. In addition to being rich in settings perfectly suited for Kodak moments, the property is also rich in history.

According to promotional pieces, the area was originally settled in the 1860s. Today, pine wood planks and bricks from the 1960s farmhouse are incorporated as design elements throughout the property, most notably in the cottage, known affectionately as the “River House.”

The flora and fauna are just as amazing – there are grapefruit and lemon trees and exotic flowers too numerous to mention. Add to that are deer feed stands and signs cautioning guests to be on the lookout for tortoises. First and foremost, says the new owner, “We are conservationists.”

The aforementioned party barn features repurposed bathtubs serving as coolers, old-time WC (water closet) doors from a London pub mark the entry to modern-day restrooms and a stain-glassed window panel from that original farmhouse has been built into the A-framed shaped design of the barn design. And while it looks rustic, the estate offers amenities of the most modern-day variety — including a climate-controlled wine storage facility.

Sugar Pointe Estate is the name given to the entire property and the 2500 square foot party barn is known as “The Sugar Shack.”

It is the name Sugar that deserves additional explanation.

Turns out Willie Sugar was the name of the original groundskeeper. Born a slave on the Belmont Estate in South Carolina, Mr. Sugar made his way to the Jacksonville area when he was just 17 and was later drafted into the Army. While in the Army, he roomed with another famous “Willie” — baseball legend Willie Mays.

That’s a very brief story of how the estate got its name but it is also interesting to note the property’s more recent history is also rich in local lore.

For instance, there are numerous whimsical touches throughout the property’s 48 acres that might offer a few clues as to who the couple is that have made place so incredible. A bicycle hangs from one of the century old trees, photos of many a darling dog line the walls of the cottage foyer and ropes leading to the boathouse hail from the “Magic Kingdom” itself.

Turns out the immediate past property owners (the estate sold in March 2018) became frustrated with the ropes lining the pier from terra firma to the 500 square foot boathouse. The boathouse itself is wired for sound, has its own rooftop deck and in addition to being large enough to handle a four-piece band also offers expansive unspoiled waterfront views where manatees and dolphins are frequently sighted. But the ropes which line to pier did not weather well the marshy climate and the salt air from the Atlantic. They quickly became tattered and torn. And that just wouldn’t do.

So, how to solve this particular problem? They called up Disney World to find a solution. Having visited the world’s most famous theme part, they noticed that ropes surrounding its many attractions always looked brand new. They got the name of the manufacturer, ordered some of their very own, now the ropes from The River House all along the 1,000-foot pier look and feel brand new too!

Also, on location is a fully renovated Airstream trailer, known as the “Silver Bullet.” It serves as an additional source of overnight accommodations (in the event the existing three bedrooms in the cottage won’t suffice) and has proven to be an excellent meeting place and hang-out for the groomsmen of any given wedding party.

Have you guessed? The couple that transformed these 40plus acres into one of the most amazing pieces of property on the East Coast is none other than Mike and Charlotte Bowling of “Pound Puppy” fame.

And the face of the new enterprise is Kelly Manus.

Ms. Manus first came to Amelia Island to enjoy the Concours d’Elegance having owned a car dealership in the DC area for some 20-plus years it was a natural travel destination.

On her first visit here, she recalls thinking how everyone she met was “just so very happy to be living here.” Consequently, it didn’t take long for Amelia Island to become her “retirement” home.

But you can’t keep a good woman down, as the saying goes.

Back in DC, she built what became a very successful automobile dealership on a lot that originally housed just four cars, one of which she mentions, she drove home every evening.

Once she came here though, Kelly wanted a new life and a new lifestyle.

She began work as a bartender at Brett’s Waterway Café where she met her husband and the Bowlings. Later, she worked with the Sheffields in the development of the Decantery, purchased a building downtown where the Patio Place now resides and is also the proud owner of an historic home in Old Town.

Her charm and energy are infectious to all who meet her and her dedication to customer service is a quality on which she prides herself and considers it to the secret to her success. She recants that every single customer of her car dealership was given her cell phone number before they left the lot. And that is still the case. Morning, noon or night, she answers the call.

For an example, one upcoming wedding will have the bride and groom – and guests — arriving by pontoon boats and at the end of the evening, everyone in attendance will depart by trolley. There are not many places that can offer that combination!

The months of October and November are already booked in full for weddings and all sort of other special events will be in the offing. Since purchasing Sugar Pointe, the location has been an idyllic setting for a host of functions ranging from holiday parties to graduation celebrations and even a live concert featuring renowned acoustic guitarist Mike Dawes. New Year’s Eve parties, fireworks on the Fourth of July and hayrides in autumn are a few of the other ideas on the agenda.

Ms. Manus shared a compliment she recently received from the Bowlings who said, “the property could not be in better hands.” This reporter agrees.

For additional information on how to make your next event extra special, go to www.SugarPointe.com or call 904-310-3687

Hi Cindy! How nice to read this lovely article about Sugar Pointe Estate! My husband and I have so many fond memories forever bonded on the trails and amongst the trees of Sugar Pointe! And we truly are so pleased that the group of new Owners are making some fond memories of their own! One small note….it’s Mike and Charlotte! I do hope our paths cross at some point around Amelia soon!
With best regards,
Charlotte Bowling