Local environmentalist and cycling enthusiast Phil Scanlan appeared before the Fernandina Beach City Commission (FBCC) on January 6, 2015, seeking support for a water taxi that would run between Fernandina Beach and St. Marys, GA. Scanlan, who serves as CEO of Friends of Amelia Island Trail, Inc., said that he was involved in this project because of his desire to see a bike trail connection that would link Florida and Georgia as part of the East Coast Greenway. Failure to make this connection could jeopardize grant requests for Amelia Island bike trails.

Representatives of both St. Marys and Fernandina Beach are working with the East Coast Greenway Alliance to try to bring this project to fruition, following the National Park Service (NPS) denial of a NPS Ferry Franchise from Fernandina Beach to Cumberland Island, GA.

The parties recognize that such a water taxi service was tried a few years ago, but was not economical for a private vendor to maintain. Project advocates are now trying to develop financial support for a service to become economically viable over time as passenger traffic increases.

The parties have proposed three incentives to encourage and support the first two years of a water taxi service: 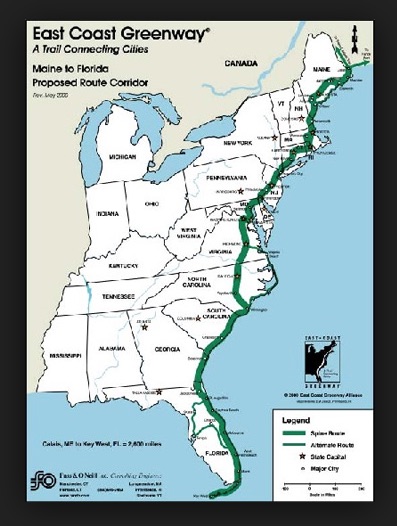 Scanlan reported that St. Marys seems receptive to the project, and the National Park Service has endorsed the idea. In response to a question from Commissioner Pat Gass, Scanlan indicated that the plan is to solicit applicants interested in providing the service. A decision would be based on which operator had the best capabilities to provide the service and was most capable of developing a sustainable business operation.

Vice Mayor Johnny Miller explained that this connection is a “big deal” for the East Coast Greenway. Without it, the trail will bypass Fernandina Beach to make the connection further west.

Commissioner Tim Poynter asked the city manager to work with Westrec, the city marina manager, to find a way around the docking fee issue 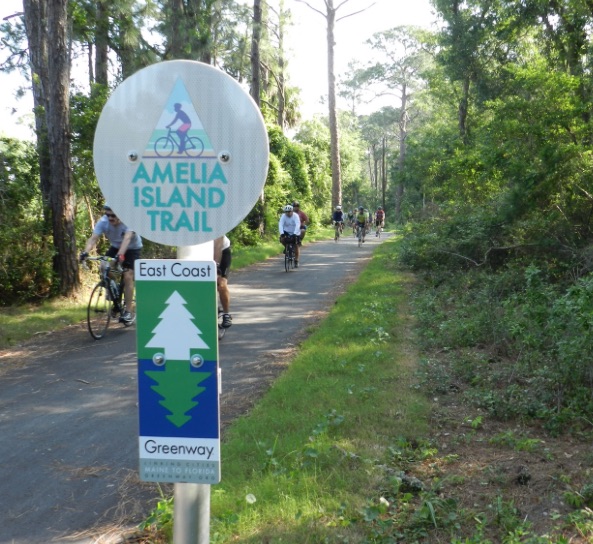 Scanlan asked for and was granted permission to work with city staff to develop a resolution to return to the FBCC for action at the next meeting. Commissioners thanked Scanlan for the work he has devoted to building and maintaining island trails, in addition to his work on this project.

That would be great. Would love to see a financially viable service.

I’d love to see this taxi service happen! I know many bikers who would love to utilize it!

Phil Scanlan is an asset to this community. Thank you, Phil, for all your hard work.

It would be great for this service to return. Debbie and I did it a number of times when the McCarthy’s ran it, but I know that passenger volume on a consistent basis was always an issue. I think FB would stand to gain more visitors then the other way and it will be interesting to see what St. Mary’s final reaction.
Thanks Phil and the Amelia Island Trail folks for all you work on this and other biking activities.

By what standard does Phil Scanlan qualify as an “environmentalists”? What has he done or is doing to maintain or conserve this region’s natural heritage? He is on record supporting increased economic development and tourism for the region, how might these objectives benefit the regional environment and reduce human impacts?

Patrick – Phil Scanlan has standing in this community. His comments are informed, objective, and credible with folks on all sides.

Mr. Leary, I don’t know about Phil being an environmentalist. What i do know about Phil Scanlan is that he’s involved himself in issues that have major impact on our community.If everyone would contribute just 10% in community service what Phil Scanlan does each year, this would be a much improved Island. What have done lately?

Google my name and perhaps find your answer. My question was how Mr. Scanlan qualified as an environmentalists? No one has provided an answer. Conversely, I would consider Mr. Scanlan a lobbyist for more development on this over-developed island and a spokesperson for special interests.

Patrick – Provide a link to the recommended source of your name.

Sorry Patrick, your not the rock star you thought you were. I’ve Goggled you, but could not fined the great environmentalist Patrick Leary.

Cute insult but those are YOUR words and YOUR characterization. Some folks work quietly out of the limelight for different values and deeper objectives.

Since this site will not allow me to cut and paste, you can find Patrick and his wife on Jacksonville.com, honored for their work with endangered birds. It is a worth endeavor and she be applauded! However, it is not laudable to have only one view of environmentalist or those working for the good of our coastline. There are many things for which we should be grateful, not just the birds (which I adore by the way). I think both of you men need to to be honored and appreciated for all you do in your area of speciality!

Don’t you just love how some small minds bicker about the messenger and not the message? This community needs this service, no matter who champions it. If the Greenway bypasses Amelia, much of the work that has gone into the development of the Trail will seem pointless. Phil should be commended for his efforts to get this moving at relatively low cost.

For a few years I was the local Sierra Club Conservation Chair.

I initiated the first ever request for a Florida Forever Grant from Nassau.
We received that Grant which was used to purchase Big Tiger Island to save it from a proposed development.
That island is now part of Ft. Clinch State Park.

I initiated the Nassau Canopy Tree ordinance which now protects about a dozen beautiful Canopy Tree roads from having the canopy trees along side the road on county property from being cut.

The 2 above tree protection ordinances are the only ones to have ever been created in Nassau County.

I worked on the Rayonier Citizen Committe which resulted in cleaning up the polluted Amelia River after Rayonier agreed to recycle chemicals 3 times to reduce river pollution.

In my Home Owner Association I am the only owner to use solar panels and I got the HOA rules changed to allow that.

Before coming to Amelia Island I spent 10 years helping the NJ DEP clean up the polluted Jersey shore.
I wrote a book I that: The Dolphins are Back – available on Amazon used books.

I spent 10 years on the Board of the Icean Conservancy — the largest non-profit focused on ocean life.

I provided an 8 page recommendation to the Jacksonville
Fish & Wildlife org that was used to improve the Manatee recovery plan. The result was a doubling of the Manatee population.

Thank you Dr. Antun for being willing to run for office and ...
wpDiscuz
14
0
Would love your thoughts, please comment.x
()
x
| Reply
Comment Author Info