General, Special Features, Things to do

Later this month, on November 24th, local marine biologist, educator, tour guide and artist Lauri deGaris will host a public art project also dedicated to the right whale, a species on the verge of extinction. The project will get underway at 10am at Main Beach.

Individuals are asked to begin collecting oyster shells from the beach and to bring them to Main Beach that morning. Everyone is invited to assist in the making of the monster-sized mosaic. While the art project is expected to be completed by the afternoon, shell contributors, participants, spectators and aficionados of the eubalaena glacialis are encouraged to come back to the project site for an official closing ceremony. Scheduled to begin around sunset, the line-up of activities is expected to be quite inspirational. 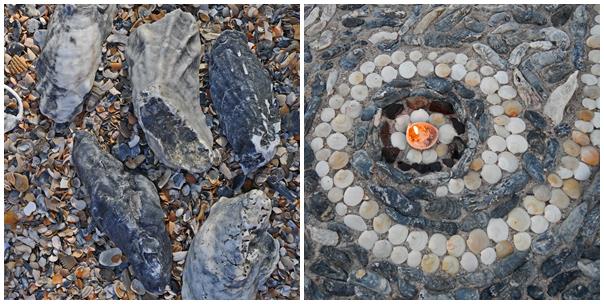 This is the third public art project Ms. deGaris has undertaken and it’s going to be huge. Life-sized in fact. Right whales can reach lengths of up to 55 feet and this creation will be at least that large. In addition, it will be accompanied by a shell mosaic of a whale calf. Calves are born at about 15 feet long, weighing some 2,000 pounds.

Typically, this is the time of year that right whales can be seen off the coast of Florida during their annual migration. The National Oceanic and Atmospheric Administration (NOAA) has a public service announcement reminding residents of NE Florida and Georgia that it is in these very warm coastal waters, and only these coastal waters that the North Atlantic Right Whale gives birth. The PSA reminds boaters to slow down to 10 knots and to stay at least 500 feet away. These precautions help to minimize the chances of having calves separated from their mothers.

Unfortunately, last year saw no births, no calves – a phenomenon that speaks volumes about the plight of these creatures. In fact, studies and surveys estimate that there are fewer than 500 North Atlantic Right Whales in existence and some scientists predict the species to be extinct within twenty years.

The main cause of death for these whales is vessel strikes followed by fishing net entanglements. Roger Payne, founder of the Ocean Alliance, a nonprofit organization “dedicated to the conservation of whales and their marine environment through research and education,” had this to say during a recent TED talk (Technology, Entertainment and Design), “No one ever seems to be interested in saving a species unless they fall in love with it first.”

Here on Amelia Island, residents have fallen in love with the right whale in a big way. In addition to November having been proclaimed Right Whale Month, next year, Fernandina Beach will host a weekend long Right Whale Festival on November 2nd and 3rd. Jacksonville hosted the 10th annual Right Whale Festival earlier this month. According to the organizers’ website, “The festival highlights local efforts to protect these whales from extinction, as well as ocean-themed activities and exhibits that emphasize education and environmentally responsible adventures and products. . . and attracts 8,000+ visitors each year.”

Until then, residents and visitors alike are encouraged to start collecting oyster shells and to put November 24th on their calendar. That’s the day that has been selected for the making of what may be the biggest public art project the Island has ever seen. A huge art installation, dedicated to raising awareness of the right whale – a species facing what many believe to be the greatest modern day challenge to any marine mammal.

Says Lauri deGaris, “whales have done so much for society. We need to give back. While problems may seem out of control, we can send out some good thoughts, some positive vibes.”

For more information, go to https://www.discoverthisco.com/#!

Editor’s Note: Born in Hagerstown, Maryland, Cindy received her BA in Political Science from Dickinson College. Upon graduation, Cindy began her career on Capitol Hill working as a legislative aide and director. She later became a part of the public relations and lobbying team of the American Iron and Steel Institute and served as director of the office of state legislative affairs for the Aircraft Owners and Pilots Association (AOPA). Cindy was involved in economic development with the state of Maryland, and served as executive director of Leadership Washington County.

As community volunteer, Cindy participates in numerous volunteer activities serving as a member of Sunrise Rotary, and as board member of Cummer Amelia Board of Directors.