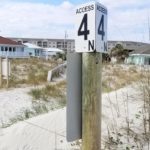 Today, photographer Chris Whelan was positioned at the end of Dolphin Avenue and further north to beach access 4 N to capture photos (see below) of today’s renourishment staging activities. The photos include sand pipes stacked near the dunes, a semi-truck delivering equipment, the staging area, tire tracks, couplers, and heavy construction equipment ready to go.

According to Vice Mayor Len Kreger, pumping should begin March 1.

Editor’s Note: Chris Whelan joined the United States Navy straight out of college in 1975 and served for 22 years as a Navy Aerographer’s Mate – the Navy’s meteorologists and oceanographers. Chris is a meteorologist holding the coveted AMS Broadcast Seal of Approval. He was an on-air meteorologist for the local stations WTLV and WJXX on and off starting in 1986 until I retired in 2004. Chris enjoys his time photographing the sights of our wonderful island, collecting and restoring vintage cameras, and being involved with local environmental issues, and enjoying my family. We thank Chris for his contributions to the Fernandina Observer.