And they don’t want the GOP incumbent to run for President either. 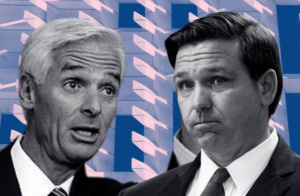 A poll showing Gov. Ron DeSantis trailing Charlie Crist suggests Floridians have turned on the Governor regarding mask-wearing. And while voters remain unhappy with DeSantis’ performance as Florida’s Governor, they dread even more the prospect he could run for President.

If the election were held today with Crist as the Democratic nominee, the St. Petersburg Congressman would take almost 54% of votes to the Republican incumbent’s 46%, with independents breaking for Crist by a 5-percentage-point margin. That’s according to The Listener Group, a Pensacola-based outfit, which released its latest numbers Tuesday.

That’s a sizable lead outside the poll’s 3.1% margin of error, and more importantly, puts Crist well above the 50% mark. Pollsters collected responses from Sept. 3 through 5.

The same firm two weeks ago similarly found Crist up by a slightly wider 57%-43% margin.

Notably, the pollster in August also found DeSantis losing to Agriculture Commissioner Nikki Fried, the other major Democrat in the race. But now, it finds the Governor leading Fried 52% to 48%, largely thanks to independents, who broke for Crist but against Fried, going to DeSantis by 55% to 45%.

In July, before a surge in COVID-19 infections struck the state, The Listener Group found DeSantis beating Crist 55% to 45% and Fried 60% to 39%. So it appears the incumbent’s performance correlates closely to the number of infections in the state.

But pollsters also found voters out of step with the Governor on a number of policy issues.

The enactment of a “heartbeat” bill in Texas, which has DeSantis looking at “protections for life,” instantly turned abortion into a topline issue in the race.

The Listener Group polling signals 59% of voters oppose a heartbeat bill and less than 41% support it.

On DeSantis’ plans to issue $5,000 fines to businesses with “vaccine passports,” 60% of voters similarly oppose that approach compared to 40% who support it.

There’s even more vocal exasperation at DeSantis’ attempt to withhold salaries for school officials enacting mask mandates, with near 70% opposed to such an approach. Even 60% of Republicans oppose that plan.

Overall, fewer than 41% give a favorable grade to DeSantis for his handling of the COVID-19 pandemic, and just over 42% give him a passing favorability rate at all. His favorability rating in the poll sank 11 points from late August.

But if there’s a job voters want DeSantis to hold less than Governor, it’s President. About 59% of Florida voters said they would vote for someone else if he were to run for Commander-in-Chief in 2024, compared to just 41% who would welcome such a run.