Editor’s Note:  On an October 5 weekend, a Navy reunion was held in Fernandina Beach of former members of a 1967 Newport Rhode Island Officer Training School. Lou Lesesne brought the group together and local resident Stan Fishburn encouraged a reunion in Fernandina Beach. The Navy group toured Fort Clinch, Kings Bay, Mayport, and cruised the Amelia River with Pajama Dave and Hupp, followed by dinner at Cafe Karibo.
A good time was had by all. We hope you will enjoy the story.

On September 16, 1967 a group of nondescript recent college graduates showed up at the US Navy base in Newport RI for 18 weeks designed to convert them into officers and gentlemen. It was the height of the Vietnam war. The Navy was asking for more people, and the OCS dormitories were full.  The slackers who showed up closest to the noon, deadline for reporting, were shuttled for housing into World War II Barracks that the Navy hadn’t gotten around to bulldozing.

No doubt it was intended as a sort of punishment, but in fact what happened was that we developed an esprit de corps that all those other guys in the much more comfortable Barracks enjoyed. (During January 1968,  I could see outside from my bunk, and it was not a pleasant sight; something like snow. It was “verrrry cold” with wind penetrating through the space.

We graduated and were designated as Officers and Gentlemen on February 2, 1968.  There was some limited contact over the years,  but eventually we all went our separate ways. During the 1980’s,  I got a hankering to know what had happened to all of these guys, and thought that a reunion sounded like fun and started looking for them. I found  half the guys, but the others were a mystery. The effort fizzled out.

Fast forward three decades or so. The internet has no secrets. I was able to locate every single one of our group. (I can’t tell you how many Jim Walsh and Charlie Parker there are in the USA, before I tracked those two down.) We agreed to meet, for a reunion in Denver in 2010 and every couple of years since then.

It has been a remarkable experience reuniting with fellows who spent 18 weeks together and then went off in different directions. We found that we still liked each other. Some of us remember very little of our time together, but still and  better, our wives have found their own compatible group, and they communicate with each other, without sharing with us their communications. 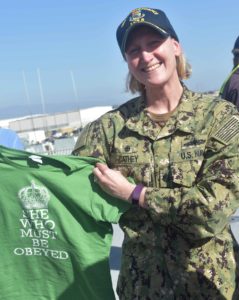 The wives have designated themselves as She Who Must be Obeyed (a name that you will recognize if you are a fan of Horace Rumpole). During our last reunion in San Diego, my wife Tammie gave up her SWMBO tee-shirt to Commander Emily Cathey, the commanding officer of USS Independence, given that Emily really MUST be obeyed.

And there’s one final twist, for better or for worse, one of our guys is Stan Fishburn, resident of Fernandina Beach. Stan’s wife Nancy is the mother of Mayor Johnny Miller who is also retired US Navy. Stan and Nancy have been very helpful in getting this reunion organized.