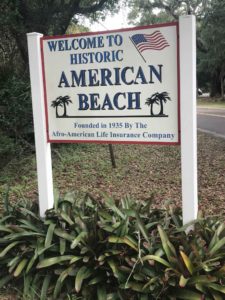 By a unanimous vote of the Board of County Commissioners on January 13, 2020, January 30, 2020 has been proclaimed as American Beach Day. This year marks the 85th anniversary of the founding of American Beach by A.L. Lewis and his partners in the Pension Bureau of the Afro-American Life Insurance Company for the purpose of developing an oceanfront resort for its employees and shareholders.

As stated in the proclamation, “during the period of racial segregation in America, American Beach became known to hundreds of thousands as the Negro Playground, and was a home in Paradise to many.” The American Beach Historic District has been on the National Register of Historic Places since 2002. Special events have been planned by the American Beach Property Owner’s Association for January 25 and 26. For additional details, call (904) 310-6696.