Retired city fire Captain Tommy Spicer addressed the Fernandina Beach City Commission (FBCC) during public comment at their February 3, 2015 Regular meeting on concerns over ongoing problems in the city’s Fire Department. Reading from a statement, Spicer informed commissioners that fired city Human Resources Director Robin Marley has amended her lawsuit and two more firefighters have left the city. He cited the unprecedented turnover rate in the department and the failure of the current chief and deputy chief to address problems spelled out in exit interviews as symptomatic of current morale issues attributed to fears of retaliation and poor leadership. He said that Peter Bergel, operations chief, is the only department manager in top leadership to possess all necessary qualifications to hold a chief position.

Spicer spoke to mismanagement and waste of city dollars resulting from putting unqualified individuals in key positions. “How can the city hire a third chief,” he asked, “when the city eliminated the third position last year?” He said that savings from that position had been used to give a pay raise to the deputy chief. He asked why the third chief position had not been advertised before being given non-competitively to Bergel. He cited extensive public records requests and unanswered emails to commissioners seeking both answers and solutions to the current problems in the department.

“I’ve had a great career and no regrets. But my heart goes out to the guys today. One of the commissioners commented: ‘Nothing but disgruntled employees.’ I can assure you, commissioners, there re no disgruntled employees. Those employees who have left and those who are looking for other jobs are tired of the abuse coming from the two people sitting in the highest level positions [in the Fire Department].

In closing, I respectfully request the City Commission to investigate, as the City Manager supposedly did, or bring in a third party under City Charter Section 136 to do so independent of the city manager or the city attorney. Thank you.”

Vice Mayor Johnny Miller asked the city manager about the process for bringing in a third party investigator. City Manager Joe Gerrity replied that the FBCC has the right under Section 136 of the Charter to conduct such an investigation. In response to a question from Commissioner Robin Lentz Gerrity replied that to his knowledge this part of the Charter had never been invoked. 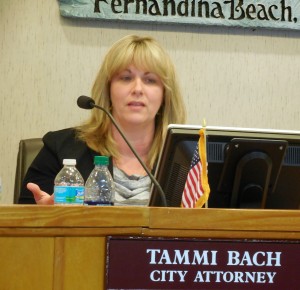 While City Attorney Tammi Bach consulted the City Charter, Commissioner Pat Gass said, “It is my understanding that it is still illegal to hire, fire or harass people due to their age or sexual preference or religion.” She was assured that it is. “As long as we all remember that. Everybody,” she said, speaking toward the audience.

The city commission shall authorize investigations by resolution. The city commission shall have the power at any time to cause the affairs of any department or the conduct of any officer or employee to be investigated; and for such purpose shall have power to compel the attendance of witnesses and the production of books, papers, and other evidence; and for that purpose may issue subpoenas or attachments which shall be signed by the mayor or the city manager and shall be served by any officer authorized by law to serve such process. The authority making such investigation shall have power to cause the testimony to be given under oath, such oath to be administered by some officer having authority under the law of the state to administer oaths; and shall also have power to punish as for contempt any person refusing to testify to any fact within his knowledge, or produce any book or papers under his control relating to the matter under investigation. Nothing in this section should be construed to limit the charter officers’ ability to inquire into matters under their respective areas of responsibility.

She said this provision was purely for the commission, who must make the rules on who does the investigation, how it is done.

Miller made a motion to conduct such investigation under the Charter provision and seek out a 3rd party investigator. Commissioner Tim Poynter seconded his motion. Gerrity asked if such consideration needed to appear on an agenda before the commission could take action.

Mayor Boner expressed frustration with listening ongoing complaints and problems in the Department. “It’s getting old,” he said. “I know this has to stop.” Miller said that while he had attempted to learn more about the problems by working a shift in the Fire Department, he backed off when told that the Chief and Deputy Chief objected. He said that he felt that a third party, outside investigation was the fairest way to get to the root of the problems. Miller felt that the emergency was appropriate because of the nature of the department’s work. He also felt that such action demonstrates to the firefighters that the FBCC is taking the matter very seriously.

Gass expressed fears of litigation arising from the investigation. Commissioner Robin Lentz agreed with Boner about wanting to get all the allegations and facts on the table and bring an end to the matter. “When I look at the public information request log and see that it is all related to the Fire Department,” she said, “I can’t imagine the time that the Clerk’s Office has spent fulfilling these more than 80 requests.” Normally, by this time of year, there have only been 3 information requests received. 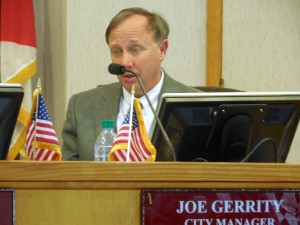 Gerrity said that he really didn’t have a problem with the FBCC’s moving forward, but he said there is always dissention in the Fire Department. “It’s inevitable,” he said.

After some debate, the FBCC voted 4-1 to add the item to the evening’s agenda as an emergency. Gass voted against the motion because she did not feel the issue constituted an emergency.

Commissioners moved on to a discussion as how to proceed. Poynter asked Bach for some recommendations on procedure, and other commissioners agreed.

Bach said that she was writing a resolution as the discussion continued to allow action to commence, but that the written resolution would come back on the consent agenda next meeting. Boner indicated that he wanted to discuss procedure at the next meeting, but consensus was to employ an outside, third party. Lentz interjected that the city Police Department had already conducted such an investigation, but other commissioners felt that did not qualify because it was still done in-house. Boner asked Bach to bring back a cost estimate as well as an estimate as to how long the investigation will take. Bach and Boner went back and forth over specifics of the investigation.

Finally Commissioner Poynter said, “Look, I don’t want to turn this into a circus, but I want to get to the bottom of it. If we have an independent person who is following our lead, someone who can come back with conclusions and recommendations. That’s what I’m looking for.”

Boner said, “That’s good. I think it’s fair to say we are dissatisfied with what we are hearing, we want to know if there is anything to it, and if there are any general recommendations [for the Fire Department].”

Gass asked, “How do we protect a third party from all the minutiae surrounding this so they don’t get all bogged down in it?”

Boner replied, “They are going to have to be a pretty good third party.”

Bach said, “Now it sounds as though we are looking for a fire rescue professional to conduct the investigation.” Bach said that she had enough information to write the resolution, and that she would provide at lease three names for the commissioners to consider as investigator. 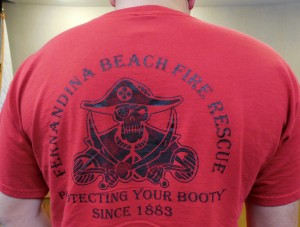 “The people in the general public aren’t going to complain, either,” Boner said, “because when we open the box, it might not be what they expect.” Miller said, “I would think the public would want to know because we are talking about a pretty serious situation here.” Lentz agreed that public safety is a paramount public concern.

Poynter moved approval of the resolution as articulated to conduct the investigation, and Miller seconded the motion. Commissioners voted unanimously to approve the resolution, although Gass expressed a “cautious” approval because there was nothing in writing to consider.

Great article – exceptionally covered and written as always by Suanne Thamm. I certainly hope they get this all sorted out with due diligence. It appears someone has been playing with fire and that’s never a good idea…