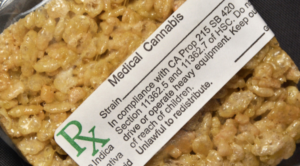 (The Center Square) – The addition of edibles to Florida’s medical marijuana market could boost a projected near-$1 billion in 2020 cannabis sales by 20 percent, or $200 million, industry analysts said.

How quickly edibles will be available is uncertain because the products also will require approval from the Florida Department of Agriculture and Consumer Services, which oversees food safety, including for edible medical marijuana products.

“Every single patient is different, as far as how their body reacts to this medicine. Some patients can’t swallow pills. Some may have lung cancer and can’t use flower,” she said. “So, this is another alternative to so many patients who may need their medicine but need it in alternative forms.”

Trulieve CEO Kim Rivers said about half of the state’s medical marijuana sales stem from smokable flower, with the new edible product line likely to boost sales by as much as 20 percent.

“Similar to what we saw when flower was introduced in 2019, we expect that edibles will contribute to a sizable share of overall sales,” she said in a statement. “We know the demand is there, as we have been hearing from our customers for some time now.”

Some analysts project Florida’s medical marijuana market will generate $1.3 billion in 2021 sales and $6 billion in annual sales by 2030 in Florida. That 2021 projection did not include edible sales.

According to OMMU’s update Aug. 21 – its Aug. 28 weekly notice was unavailable Friday afternoon – 399,253 Floridians are qualified by 2,573 certified physicians to fill medical marijuana prescriptions at 270 dispensaries across the state.

Within hours of OMMU posting its edible guidelines, CannaMD, which operates 17 dispensaries in the state, announced Thursday one of its physicians became the first in Florida to prescribe medical marijuana edibles to treat post-traumatic stress disorder.

“We couldn’t be more excited to finally make this route of administration available to patients,” CannaMD co-founder Ryan Scotson said in a statement. “Our board-certified physicians are committed to providing evidence-based medical cannabis treatment to Florida patients, and this is just another opportunity to make this incredible medication available to the patients who truly need it.”

The rules, which went into effect immediately, require a $650 annual permit to manufacture edibles and must follow these guidelines:

• Edibles must be in geometric shapes (not animal shapes);