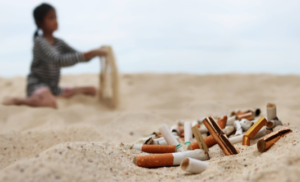 The Senate Community Affairs committee voted unanimously to advance legislation (SB 224) to allow cities and counties the right to regulate smoking in public beaches and parks.

Sen. Joe Gruters, a Sarasota Republican, has pushed for years to give that right back to local governments. He noted his home community of Sarasota previously had a ban on smoking on the beach, but a lawsuit in 2013 made clear the right to regulate smoking lays firmly with the state.

He noted many beach rankings, including the Florida International University-based Dr. Beach annual listings, give points for beaches remaining smoke-free.

“There’s no reason we can’t get those points and be No. 1 year after year,” Gruters said.

Sen. Ed Hooper, a Pinellas Republican, noted his beach has more than one location that has topped the Dr. Beach list, leading to a brief face-off between the Gulf Coast lawmakers.

But the only true resistance to the law came courtesy Sen. Janet Cruz, a Tampa Democrat. She questioned if limiting people relaxing with a beer and cigar in their hands on the beach violated their personal rights.

Gruters noted it’s unlikely all local governments will choose to ban smoking, and many may set up smoking areas of the beach. Such an option may be best for all, including those inhaling the carcinogens.

“Smokers will have a chance in some areas to be happy together rather than have a family that has kids playing in the sand, reaching their hands in and pulling out those cigarette butts,” he said, noting butts top the list of litter gathered during beach cleanups around the state.

Ultimately, all senators including Cruz backed the bill. Several joked that while the Legislature routinely hears complaints it preempts local governments from acting as they wish, this will give a right to cities and counties.

Sen. Gary Farmer, a Broward Democrat, said it would be good for the beaches in Florida to wave away some of the smoke off shore.

“Generally speaking, I’m in favor of more butts on the beaches, but not in this instance,” he said.

The bill now heads to the Senate Environment and Natural Resources Committee. A House companion (HB 105) awaits a calendar date in the Professions and Public Health Subcommittee.