After years of indecision regarding the need for and location of an airport welcome center, the project moved one step closer to reality during a Joint Special Meeting of the Fernandina Beach City Commission (FBCC) and the Airport Advisory Commission (AAC) on March 17, 2015. Following a presentation by Andrew Holesko of Passero Associates, the city’s airport consultant, discussion by both boards and public input, the FBCC unanimously supported the AAC’s recommendation to locate the facility on the north side of the municipal airport. This decision seemed to conflict with the pending RFP evaluation, since the RFP called for proposals to build the facility on the east side of the airport. 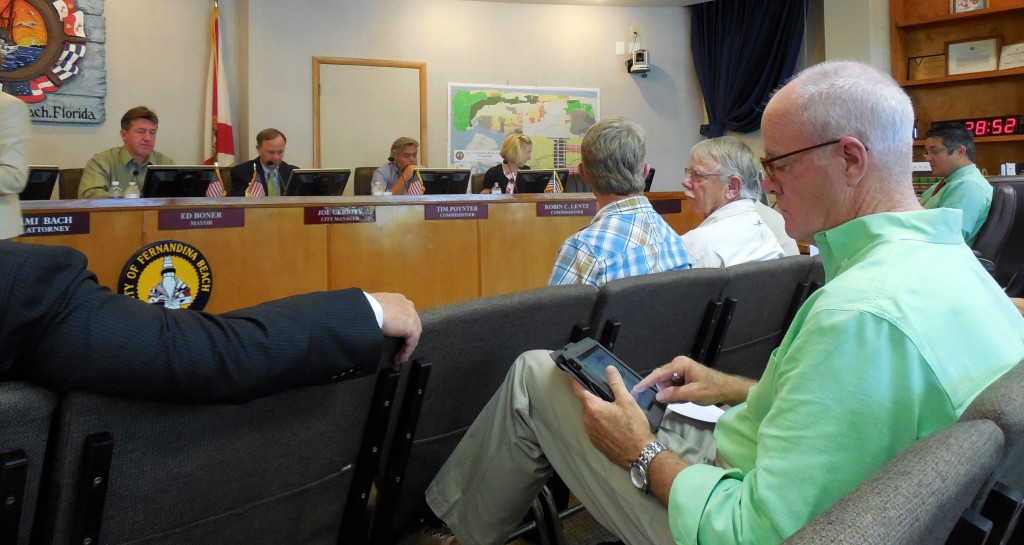 At the end of the FBCC Regular Meeting which followed the Special Meeting, City Commissioner Tim Poynter raised concerns about the validity of the RFP in light of the FBCC’s decision to change the proposed location. City Manager Joe Gerrity and City Attorney Tammi Bach said they had considered that, but left the decision on how to handle the change up to the FBCC. Gerrity said that the bidders would be able to change their proposal during their presentation. But both Poynter and Mayor Ed Boner expressed concerns that other respondents might emerge with the new location and that bid responses might change substantially. Bach advised that it is legal for the city to proceed as planned, but that might not be preferable for the FBCC. Gerrity said tht he believed that both respondees to the RFP would proceed, and he did not receive inquiries from any other interested parties. Poynter pressed on, saying that one of the bidders might have offered more had they known that the north side—apparently the preferred site by both bidders—would be the location.

The final decision directed the city manager to notify both RFP respondents by telephone of the change in proposed location for the welcome center and offer them the opportunity to change their submissions before noon on March 25. Although not officially named during the meeting, the two respondents to the RFP are 8 Flags Aviation and McGill Aviation.

In introducing the meeting City Manager Joe Gerrity advised the parties that the city has received 2 responses to the RFP to build an airport welcome center on the east side of the airport, but both respondents indicated a preference to locate the facility on the north side.

Four possible scenarios for a north side welcome center are presented below: 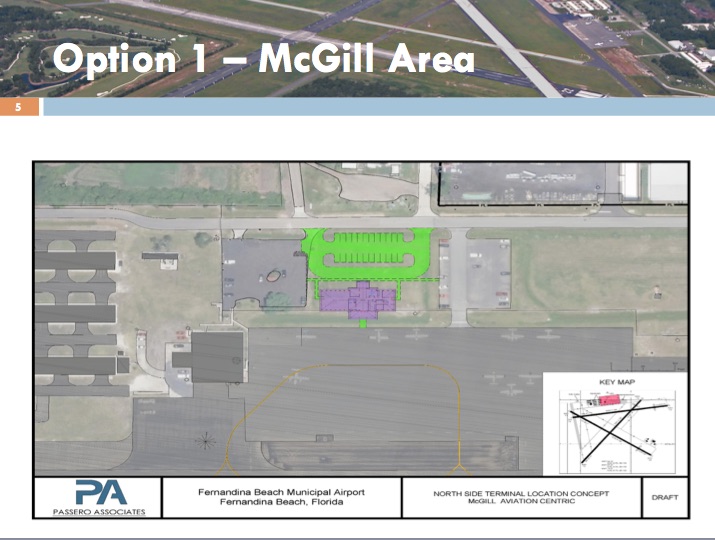 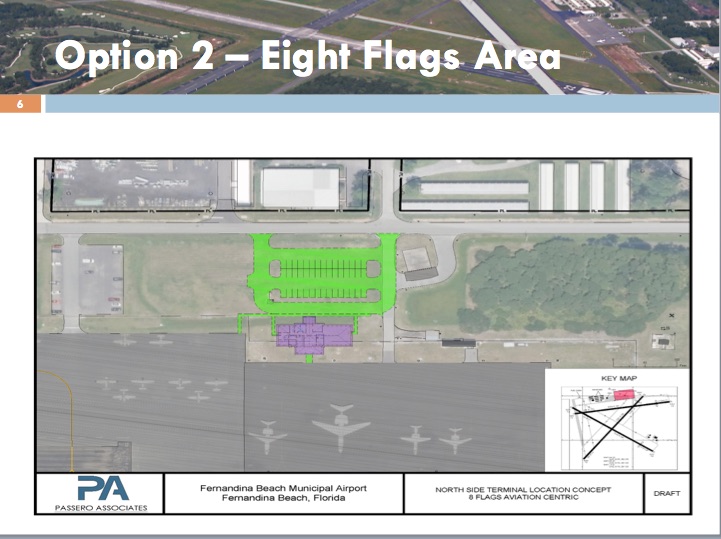 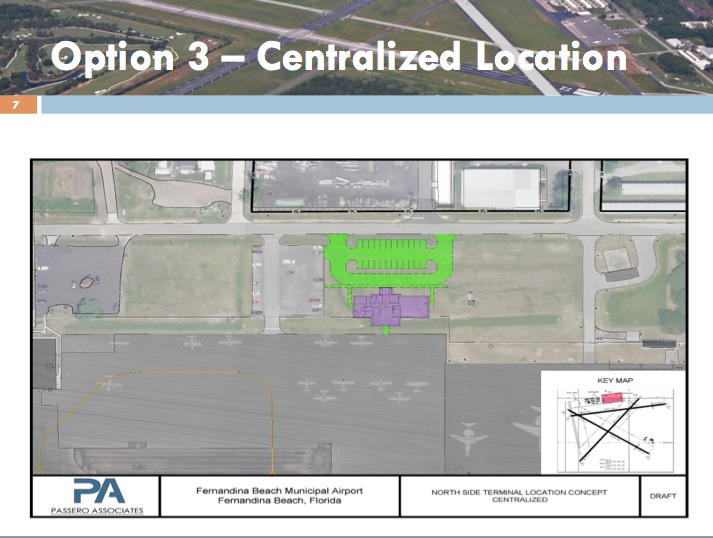 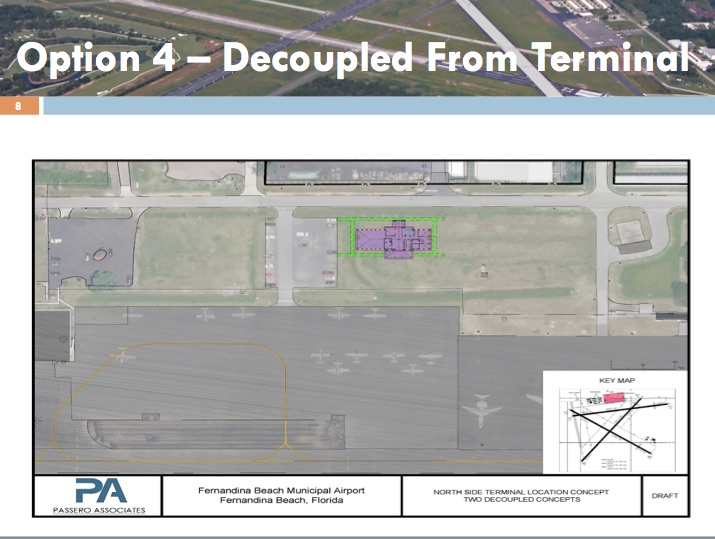 Passero Associate engineer Andrew Holesko presented a series of slides to illustrate possible locations, providing pros and cons for each. He said that the east area of the airport would remain 100 percent usable for T- hangars and corporate hangars, should the welcome center location change to the north side. In response to a question from City Commissioner Robin Lentz, Holesko said that the advantage of the east side is that it is the geographic center of the airport and can accommodate new demand, whereas the north side would be fully built out. 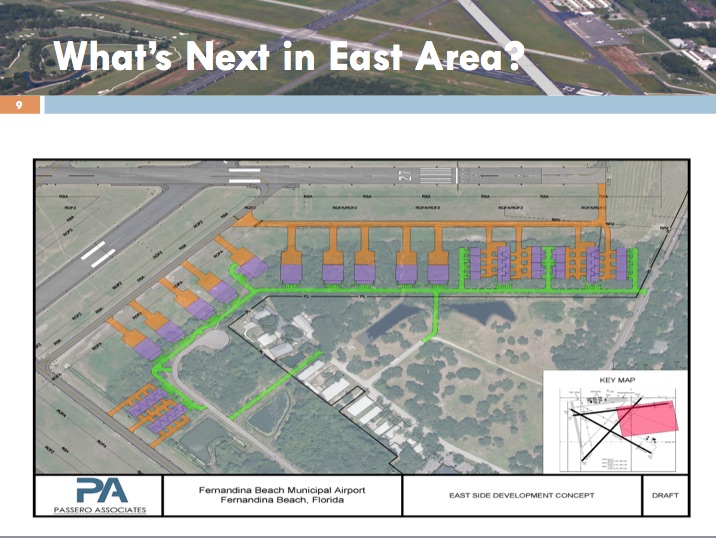 City Commissioner Tim Poynter asked, “If both [RFP respondents] want to build on the north side, why not?” Five members of the public spoke to support the north side location for the welcome center, expressing opinions that such a location would be best for business, close to the apron, more convenient for pilots and passengers.

Vice Mayor Johnny Miller asked Holesko to render an opinion, but he declined, stating that his role is to provide technical guidance, not recommend options.

Jacksonville aviation attorney Jeff Fleming took the discussion off topic with a discussion over current fuel prices at the Fernandina Beach airport. He said that airplanes drop off passengers but do not refuel here because aviation fuel is $2-3 more per gallon here than at other regional airports. AAC Chair Richard Gray admitted that he fueled his plane at the Palatka airport for $3.75 per gallon, while McGill Aviation was charging more than $6 at the Fernandina Beach Airport. Vice Mayor Miller said that he had checked other local airports and found that there was not such an extreme discrepancy in prices.

Following Holesko’s presentation, AAC Chair Richard Gray reminded the FBCC that it is difficult to compare airports by size. He suggested that it is more important to look at operations. The city airport is a coastal resort airport, which defines its operational parameters. He said that the RFP called for a public private partnership and that the new facility must include a Fixed Base Operator (FBO) or “it will be a dead building.” He stressed that as an enterprise fund, the airport is funded by user fees, not taxpayer funds.

City Commissioner Robin Lentz said that she was a big proponent of competition and moved approval of the change in location to the north side. Commissioner Pat Gass seconded her motion, which was approved by unanimous vote.

Bach said that the city has now closed the proposal time on the active RFP and two proposals are on the table. It is allowable for the City Manager to work with both respondents to change their submissions. Boner said that Poynter was making a valid point because in effect the city was changing what it was selling. Bach said that the matter was between the commissioners and the city manager, but she did not believe that there would be any new proposals coming forward under a new advertisement. Gerrity said that under the RFP the city was looking for a partner in the new building, and that the particular configuration of the facility was irrelevant at this point.

Bach said that in order to keep the proposals sealed and to meet the time requirement, she wanted to issue a notice of amendment with a time certain to open the proposals. Gerrity said that the evaluation has been scheduled for March 25, with panelists coming in from out of state.

Bach said that she did not want “anyone out there” to get the impression that by re-advertising the city would get more responses. “I don’t think we’d get another proposal if we rebid the whole thing,” she said.

From the same people that brought us the Big P Grant. When will we ever learn…..

North side is clearly a more attractive location due to ease of access and visibility off AI Parkway. East side location has more room and the basic infrastructure in place for expansion, but vehicular access is difficult and needs improvement in both roadway as well as access appearance.

access seems to be the wiser – I would agree the north end.