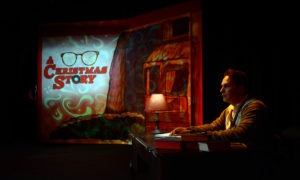 Amelia Community Theatre opens the holiday comedy A Christmas Story on December 6 on the main stage at 207 Cedar Street. Set in 1940s Indiana, it is a time when school yard challenges escalate to the ultimate triple dog dares, and gullible boys place wet tongues on frozen lamp posts. In the winter, fathers battle the furnace, and mothers dress their children in so many layers that the kids can’t get up if they fall down in the snow.

The tale of young Ralphie and his quest to receive a Red Ryder carbine action air rifle for Christmas is familiar, as is the refrain uttered by every adult in Ralphie’s life: “You’ll shoot your eye out.” Ralphie daydreams of heroic adventures, while his father, the old man, dreams of the Christmas turkey dinner and rejoices over the major prize he won in a contest, a leg lamp.

Philip Grecian has adapted his play from the 1983 film A Christmas Story, which was based on Jean Shepherd’s semi-autobiographical books In God We Trust, All Others Pay Cash and Wanda Hickey’s Night of Golden Memories. Shepherd, who grew up in the Midwest, became a humorist and radio host, and also narrated the movie version of A Christmas Story. A musical version of the show reached Broadway in 2012.

Director Tener Wade says, “This show is an enduring classic because it reminds us of what it is like to be children, and that is powerful. The satirical humor and childlike honesty in the play are appealing across the generations. It has been fantastic to have a play where young children and adults work together, combining the never-ending energy of the children and the experienced determination of the adults.”

The cast includes Aiden Mayberry as the young Ralphie and Brian Crane as the adult Ralphie. John Chastine and Stephanie Mayberry play Ralphie’s parents, with Samuel Mayberry as his brother Randy.

Performances are at 8 p.m. on December 6-7, 12-14, 19-21 and at 2 p.m. on December 8 and 15. The December 6 ticket holders are invited to the opening night party from 7 to 8 p.m. with holiday treats provided by the ACT Guild. There will also be nightly drawings for holiday gift baskets.

Show tickets are $22 for adults and $10 for students through college, and are available online at AmeliaCommunityTheatre.org and by calling (904) 261-6749. A five play season ticket for $100 is also still available through December 21. ACT’s box office is open from 11 a.m. to 1 p.m. on Wednesdays, Thursdays, and Fridays, and opens ninety minutes before curtain on show dates.