The Land Development Code and Economic Development Working Group met on January 20, 2015 to continue its discussions on the 8th Street Corridor in Fernandina Beach. This group has been meeting since March of last year to advise the city on possible code changes that might spur economic development and improve the appearance of 8th Street/SR 200. The group represents a cross section of community interests, including economic development, city and county planners, Planning Advisory Board, real estate, architectural design and engineering, and business, as well as concerned citizens. City Commissioner Robin Lentz continues to serve with the group following her election. Members of the public have been encouraged to participate.

Adrienne Burke, Community Development Director, reported that she hoped to have a draft for the group in February so that work could be wrapped up in March of this year. She suggested that from April through the summer the city should concentrate on outreach efforts and present any proposed code changes to the city’s Planning Advisory Board in the fall.

The consensus appears to be to attract more mixed use to the areas bordering 8th Street, while continuing the C-3 for areas included in the Historic District. Senior planner Kelly Gibson asked group members if a density of 8 units per acre is sufficient, and if not, what would be more appropriate. Group member Nick Gillette suggested 20-25 units per acre, which would allow for 4 units on a 100-foot by 100-foot lot.

Group member Phil Griffin said that a higher density would allow developers to build more affordable, workforce housing, because rents could be kept low. Currently he said, “There is no way to create workforce housing within the city limits.”

The group members agreed that density bonuses work with large lots. Gillette said that such a plan might work for someone developing 6-8 lots, but not 4.

Audience members spoke to parking needs for new residences and space for people to walk, bike and run.

County Planning and Zoning Chair John Stack suggested that any overlay for the corridor be extended into the county. Burke asked if members were more supportive of an overlay or a new zoning district. The consensus was that higher density is desirable. County Planner Doug McDowell stressed the importance of preparing visuals to help people understand what an increase in density would look like. 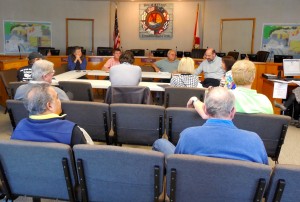 Audience members joined in discussion encouraging incentivizing visual improvements to properties along 8th Street and development of a streetscaping plan that volunteers might assist in implementing and maintaining.

Burke was very clear that the city was not suggesting a separate design review process for development in this area. McDowell suggested, however, that the city might consider producing a “best practices” guide to help developers understand what look the city was trying to achieve.

Group member Eric Childers suggested that the city consider diagonal parking along the first block of streets that intersect with 8th Street.

City Planner Scott Schultz reported on his research into various incentives offered by other communities to encourage development in target areas. Examples included: waiving fees for business permits and banners; financial incentives for creating new jobs; incentivizing business relocations. Burke emphasized that such measures would not be part of the Land Development Code but would require approval at the City Commission level. She said that the city already has a model in that it waives certain fees for new home construction by Habitat for Humanity.

Burke deflected questions about utility impact fees, but in response to a question informed the group that commercial construction does not pay parks and recreation impact fees.

In light of anticipated growth in new construction in Yulee, group members believed that Fernandina Beach’s economic development efforts need to target redevelopment of neglected or under utilized space. Shelley Hirsch, representing the Nassau County Economic Development Board, reported that the county has formally adopted an incentives program to attract new businesses.

The next meeting is scheduled for 3:30 p.m. on February 18, 2015, in Fernandina Beach City Hall Chambers. The public is always welcome to attend.

This appears to be a wonderfully diverse group that I am sure will come up with some great ideas for redevelopment. Outside the policy issues the group will tackle, an immediate improvement would be for the City to do some major landscaping development on the City owned lot in the NW corner of 8th and Lime. There have been discussions over the years of simply building a berm with plantings parallel to 8th and Lime to provide a more attractive entranceway appearance while still retaining a large part of the lot for utilization, although in the past couple of years the only utilization has been for storage of materials that contributes to the unattractive appearance. In recognition of the City’s shrimping history, wouldn’t it be grand to have a replica shrimp boat there.
First impressions are lasting impressions and if you create that Wow! factor when first entering the City for visitors, perhaps it will lessen the critical eye for other parts of 8th Street and its tired, worn look.

Dave that’s a wonderful idea. I think we have a candidate for that shrimp boat. Last time i looked it was laying on the west bank of the Amelia River. That would have the Wow factor. Reminds me of the Submarine at the entrance to the Sub Base. It would signify our Towns legacy.Super thought.

Steven,
LOL! Actually, the folks at the Maritime Museum (just south of the abandoned concrete plant on 8th Street) contacted me when I was serving as interim city manager in 2012 and proposed securing, transporting and placing a decommissioned shrimp boat on the lot as an annex of their museum. Their proposal was fraught with a number of liability, operational and liability issues for the City and as we were trying to work through those, they lost the opportunity to get the boat they were considering but hoped to get another one. So the idea didn’t get much past the discussion stage. I know that money is still real tight but it wouldn’t cost too much to install the berm and do some plantings there.

I have to advocate for this effort being a city/county partnership . . . the 8th Street “corridor” begins once you go over the Shave bridge and the City Limits don’t kick in until Lime Street . . . . the worst offender for an attractive entry to Fernandina Beach is that abandoned cement plant . . . which is on county land and lies outside of the City limits. I love the ideas put forward, but the cement plant is not only an eyesore, it’s on the state “brownfields” list (meaning it’s a toxic waste hazard). I was heartened to see that some county officials are active in the group . . . let’s hope that the county and city can work together to get the entire corridor up to snuff!

Yes, there is a real need for their to be a joint effort with City and County as there are a number of issues to be resolved such as the big differences in the sign ordinances.

This is a suggestion that has been sent to the City. I think it is simple, doable , inexpensive, and would help.

I have two ideas on an issue facing the City at this time which I think could be a beneficial, as well as a cost effective solution to help solve a problem.

It is the general opinion that 8th Street is in need of improvement. I understand there are committees addressing this. What I am proposing is a simple, cost effective way to enhance the entrance to our City now. It is not a fix-all but rather two small inexpensive steps to help.

There are currently about twenty utility poles that are equipped with piping to except “banners.” These banners are about 18″ by 48.” I know there is some committee that helps with the installation of these banners from time to time. Why can’t we, as a City, purchase a few “sets” of banners and rotate them every few months to advertize local events or just promote our City. Topics could include Shrimp fest–Chamber music– car shows– or just welcome signs. This is not an idea that I feel we should beat to death and try to get funding for from outside sponsors, hold workshops, or have endless discussion about. It is easy and inexpensive enough to expedite achieving only positive results. This would be funded by the City initially and should outside sponsors want to join this effort, that could always be worked out at a later date.

I have done some research and found that the City puts up and takes down any banners along 8th Street. The cost of this would fall under the City budget.

Simply put, for an initial investment of $4000 we could have year round banners along 8th. This seems like a small price to help spruce up what is considered by many to be an embarrassment to our City.

As you drive along 8th street, it is hard not to notice the empty stores. Why can’t we have a coordinated effort between the City, the real estate community and groups associated with our local artists or school art students and paint various murals on the blank windows? I have spoken to some within the real estate community and they showed considerable interest. I have checked and, from what information I have obtained, this is not a code issue. It was even explained to me that downtown Jacksonville has such a program going. If this could be coordinated between our art community and the City, a program like this could be expanded to Sadler Road addressing many barren properties. If you think of it from a business stand point, the less derelict looking you make an area, the more attractive it becomes, not only to tourists but also to potential store owners.This generates growth and growth generates taxes and jobs for locals.

I feel that both these ideas are worth exploring. The banner improvement could be felt immediately where I understand the glass painting will take more coordination.

Looking forward to hearing your views on this.

“No one was so worried when they cut down all the tree...
wpDiscuz
6
0
Would love your thoughts, please comment.x
()
x
| Reply
Comment Author Info