From the Port’s RAISE grant application:

The estimated 83 new direct port jobs related to the project, paying $6.5 million in wages, and resulting in $12.9 million in re-spending and local consumption, as well as most of the 246 construction jobs, will be largely filled by residents of these communities – estimated by port management at 90% of new jobs to be filled. The port has a vested interest in maintaining workforce motivation and generating a strong talent pipeline as volumes ramp up and new capital investments are deployed, and one way to optimize motivation is to create more employment – good, solid, family- supporting jobs averaging $78,000 per year (benefits incl). Most of these new jobs don’t require a college education; they simply require dedication and a solid work ethic. The terminal operator has a strong system in place for on-the-job training that ensures the skill sets developed on the job align with special requirements for handling specialized forest products. (Source: Martin Associates, Worldwide Terminals Fernandina.)

At the July 6, 2021 Fernandina Beach City Commission (FBCC) meeting, World Wide Terminals CEO and Port Director Christopher Ragucci requested a letter of support from the City to endorse two Ocean Highway and Port Authority (OHPA) grant requests.  Copies of the grants were not provided at the time, but Ragucci explained that OHPA was seeking federal funding to  modify and enhance antiquated facilities, providing for expansion and modernization of the Port’s on-dock warehouses, rail capacity and truck gates.

After considerable discussion about the lack of specificity, potential for expanding the Port’s footprint and the City’s ability for input into any of the plans, Commissioners voted 3-2 to provide the endorsing letter.  Both Mayor Mike Lednovich and Commissioner Chip Ross voted against such endorsement, citing lack of detail, trust issues and outstanding litigation.

Recently, the Fernandina Observer obtained a copy of the RAISE grant, which consists of 32 pages plus appendices.  RAISE, which stands for Rebuilding American Infrastructure for Sustainability and Equity, is a grant program of the U.S. Department of Transportation. The Port is seeking $15M for projects cited in the grant request.

What was not explained to City Commissioners prior to their vote to endorse the grant request:  The Port will seek taking over City rights-of-way in fulfilling its plans laid out in the grant application.

Few could argue that Port upgrades are needed. Under previous terminal management there was steady decline in the Port of Fernandina’s cargo volumes from 2000 to 2018. Under new direction by Worldwide Terminals, the Port of Fernandina increased its tonnage from 195,483 MT in 2019 to 273,897 MT in 2020, a 40% increase. It is on track to grow tonnage to 414,693 MT in 2021, representing a 112% growth rate in just under two years. The port’s warehouses will be a full capacity utilization at the end of 2021.

But over the Port’s history, there has been an uneasy and sometimes antagonistic relationship with the City of Fernandina Beach.  Despite assurances at the time of the Port’s creation that the operation would not expand beyond its initial footprint into City industrial and residential areas, there have been several attempts to do so.  There have been disputes between the City and the Port over the need for the Port to obtain building permits for internal improvements.  Most recently the City and the Port have been at loggerheads over the continuing obligation of the Port to provide an annual payment of $50K in lieu of property taxes.  That dispute is currently under litigation.

Plans outlined in the grant application

According to the Executive Summary presented in the RAISE grant application:

This $15 million project significantly improves breakbulk and container capacity at the Port of Fernandina. It will redevelop the Port warehouse complex by expanding three warehouses on and adjacent to the Terminal’s existing footprint. It will move, expand, and modernize the existing gate facility from two lanes (one in and one out) to four lanes, to increase cargo access and egress. It will lengthen the railcar siding platform and construct 20 new truck loading bays at the warehouse complex. In addition, it will replace a small office building, and construct container yard improvements incorporating a tidewater management system with partial new bulkhead and raised section of yard. It will also reinforce part of the yard to better accommodate RTGs.

The expanded facilities will accommodate 750,000 tons of breakbulk cargo and 50,000 TEUs per year. 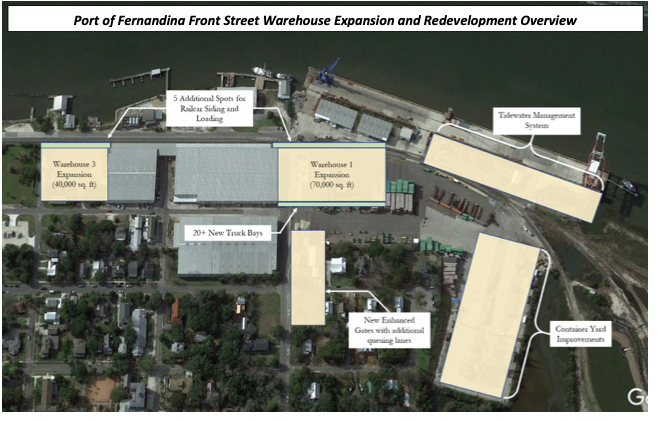 There are many positive outcomes to be achieved, should this grant be awarded.  The Port will be able to tie into resiliency efforts of the City of Fernandina Beach by reducing vulnerability to flooding. There will be more jobs provided, along with enhancing the economic benefits to the local community. The improvements will take trucks off the road. According to the information in the grant application, “At current port cargo volumes, a switch to direct-ocean export will remove 15,000 to 16,000 trucks per year from the roadways between Fernandina and Savannah. That is 41 trucks every day. When warehouse capacity and all-water services improve and this business accelerates, the savings in vehicle miles traveled will grow quickly.”

But it is also clear that some elements of the grant application were not vetted by the City of Fernandina Beach, specifically the Port’s acquisition of City rights-of-way.  According to the grant application, “Street right-of-way acquisitions are required. Public street sections that cross between port warehouses are not secured, creating critical safety and security considerations. The situation is untenable. The right-of-way transfer will correct a gravely dangerous situation and further secure the US Border.”  The sentence that follows this sentence reads:  “A city letter of support from the City is in Appendix C.”

Ragucci did not raise the issue of encroaching into City rights-of-way when he sought the City’s endorsement of the grant.  From the augmented photo included in the grant application, it appears that Dade Street would dead end into the Port as part of the plan. 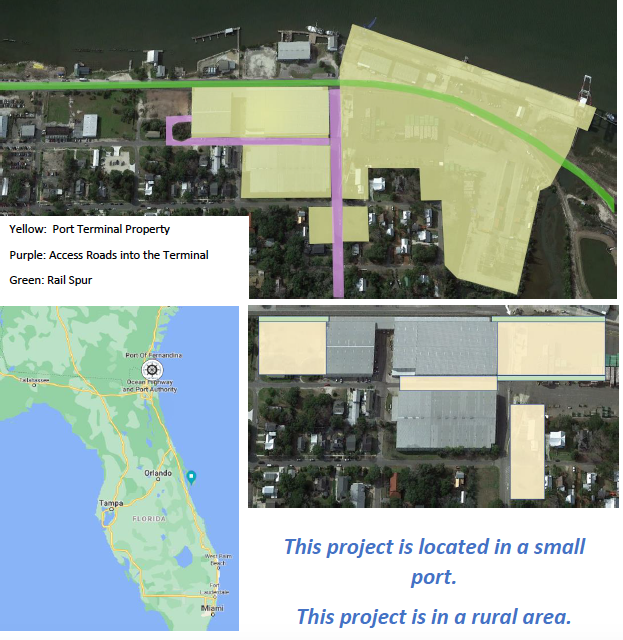 Language in the grant application continues: “The Port has a strong relationship with the City and a commonality of interest related to public safety and a secure US border on the streets in question. There is a backup preliminary design plan that phases the project work to accommodate delays in obtaining right of ways, or even failure to obtain. Project functionality changes very minimally.  The project will enhance cargo and border security by eliminating an open-to-the-public street in the midst of the warehouses, and by moving and expanding the gate which does not currently secure the entire complex.”

Should the grant application advance through the approval channels, there will be opportunities for both the City and the Port to iron out territorial questions.  From the application language quoted above, it would appear that the Port has contingency plans, should the parties not be able to reach agreement.