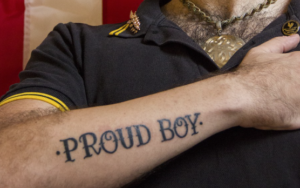 Fringe groups, normally background noise in election campaigns, are front and center in several Florida congressional and legislative races, with candidates denying or defending links to the Proud Boys.

The all-male group has confronted antifascists in Portland, Ore.; Charlottesville, Va.; and New York City where, in 2018, members assaulted protesters. Two are now serving prison sentences as a result.

Proud Boys gained ambient prominence after President Donald Trump, when asked to denounce white supremacy during his Sept. 29 debate with Joe Biden, called on Proud Boys to “stand back and stand by.”

Led by Miami’s Enrique Tarrio, who succeeded McInnes as chairman in 2018, Proud Boys has been visible at Florida Republican events for four years.

Salazar has no affiliation with Proud Boys, but Shalala told the South Florida Sun Sentinel if Republicans don’t denounce “the far-right, misogynistic, anti-immigrant extremists” Proud Boys, then they’re “enabling” them.

She calls McInnes a friend and said “he is not an anti-Semite.” Frankel disagreed.

“Why do you think Facebook is throwing people in FB Jail who share information about Proud Boys? I think it’s because they’ve seen a drastic spike in searches and they are worried that people are educating themselves rather than blindly believing what MSM narrative. Anyone have a better theory?” she wrote.

Esther Byrd was responding to Hicks’ call for her husband to denounce Proud Boys and QAnon.

“Over the past five months, (Byrd) has remained silent as the country has grappled with systemic racism, a rise in far-right extremist violence and the spread of QAnon. That silence must end today,” Hicks wrote.

Engels said Proud Boys is “a multiracial organization” and, “unlike Antifa,” isn’t “burning down cities. For Anders Croy … to lecture a multiracial group as white supremacists is despicable.”