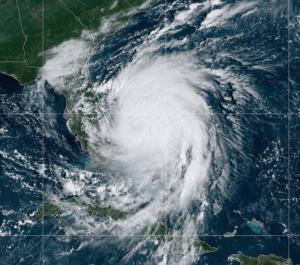 (Originally posted on The Center Square on April 7, 2020) – As many as four major Atlantic hurricanes are predicted this year, with a 70 percent chance at least one Category 3 or bigger hurricane makes landfall on the U.S. East Coast and/or Gulf Coast.

Models from the Tropical Meteorology Project at Colorado State University’s Department of Atmospheric Science emphasize the “and” in the “and/or.”

CSU projects there will be 16 named storms, including eight hurricanes, with four major storms of Category 3 or higher, during the Atlantic hurricane season, which begins June 1 and ends Nov. 30. The “typical” season averages 12 named storms and six hurricanes.

CSU’s forecast said the Gulf of Mexico is 3 degrees warmer than usual and without El Niño’s storm-busting vertical wind shear, conditions are favorable for tropical storm development for the fifth consecutive year.

“We anticipate the 2020 Atlantic basin hurricane season will have above-normal activity,” the forecast said, predicting 140 percent more storm activity than a “typical” year.

CSU’s Tropical Meteorology Project, a go-to forecaster with a 37-year hurricane modeling record, said the normal annual range for U.S. landfalls is 84 percent, with 52 percent normal odds for at least one major storm hitting the U.S.

An emergency evacuation during a pandemic presents daunting challenges, such as how to accommodate social distancing requirements meant to slow coronavirus spread that also would limit shelter capacities.

Evacuation would require fleets of extra buses to keep people safely apart or would need to begin removing people before forecasts are reliable.

Convincing the vulnerable in a storm’s path to fear the hurricane more than possible exposure to COVID-19 in a shelter also could be difficult.

Florida Chief Financial Officer Jimmy Patronis on Monday asked the Revenue Estimating Conference (REC) to determine how equipped the state’s $3.9 billion in reserves is to handle a “double whammy” of a hurricane strike and lingering pandemic.

Gov. Ron DeSantis mentioned CSU’s forecast Thursday in West Palm Beach when he expressed concern about how “the social fabric holds up” but confidence in the state’s ability to financially respond to dual calamities.

“I would say in terms of the financial preparedness, I think because of the federal bill, we should be able to get money for (COVID-19), so we are spending money but should get reimbursed,” he said. “Financially, we will be able to weather (a pandemic and hurricane) from a government perspective.”

CSU will update its forecast June 4, July 7 and August 6. The National Oceanic and Atmospheric Administration (NOAA) will release its forecast in May.