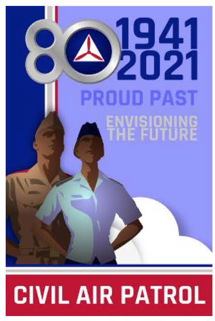 Fernandina Senior Squadron FL-323 is looking for a few more men and women who are searching for a volunteer opportunity to give back to the community, learn a new skill or gain experience as well as to provide a positive influence on today’s youth. Many CAP volunteers do not fly but participate in a variety of volunteer activities, such as working with youth, assisting with search and rescue or completing administrative duties necessary to keep the Squadron running.

CAP was founded on Dec. 1, 1941 just a few days before the Japanese attack on Pearl Harbor, to mobilize the nation’s civilian aviation resources for national defense service. Since Civil Air Patrol’s formation during the earliest days of World War II, this vigilant organization of citizen Airmen has been committed to service to America.

In its USAF auxiliary role, CAP operates a fleet of 560 single-engine Cessna aircraft and more than 2,100 small Unmanned Aircraft Systems (sUAS) and performs about 90% of all search and rescue operations within the contiguous United States as tasked by the Air Force Rescue Coordination Center. Often using innovative cellphone forensics and radar analysis software, CAP was credited by the AFRCC with saving 130 lives during the past fiscal year. CAP’s 56,000 members also perform homeland security, disaster relief and drug interdiction missions at the request of federal, state and local agencies.

CAP’s organizational structure begins at the grass roots level, at a local unit, called a “squadron.” The “wing” is the state organizational unit which builds into the region and then the national organizational unit. Civil Air Patrol’s missions for America are many, and today’s adults and cadets perform their duties with the same vigilance as its founding members — preserving CAP’s 80-year legacy of service while maintaining its commitment to nearly 1,500 communities nationwide.

CAP’s official core values of Integrity, Volunteer Service, Excellence, and Respect are woven into its voice. Units, activities, and programs do not create their own set of core values, nor embellish or add to the core values. As a single, unified organization, they are all bound to the same core values in everything they do.

Squadron Commander Captain Chuck Colcord and Airport Manager Nate Coyle recently sat down to chat about local activities that support CAP’s Mission:  Volunteers serving America’s communities, saving lives, and shaping futures. They also educated this reporter on what CAP is and is not.

Local squadron records appear to begin in the 1970’s. Colcord produced a squadron scrapbook and photos highlighting past rescues and programs.

Currently, the Senior Squadron has 16 members and is looking to recruit more volunteers. The term “Senior Squadron” does not mean “Senior Citizen.” Although there is no upper age limit, members must be at least 18 years old. And moreover, while pilots are welcome, many volunteers are not pilots and just enjoy working in aviation activities and with students. Membership requires a background check, fingerprinting and an annual joining fee of $70.

CAP meetings are open to the public and normally held at the Fernandina Beach Airport. However, due to the ongoing pandemic, meetings are currently held virtually.

Fernandina’s Senior Squadron has a Cessna 182 assigned to them which is flown by their active pilots in conducting cadet orientation flights, training in search and rescue (SAR) and disaster recovery (DR) missions and responding to tasking when called upon.

Commander Colcord said that in the past the Squadron has assisted during space launches and even during the Super Bowl that was held in Jacksonville in 2005. They have conducted many search and rescue missions, generally initiated when signals are detected from possible downed airplanes.

Colcord cited community service and work with cadets as the prime drivers for members of the CAP Senior Squadron and stated; “There is nothing like seeing the smile on a kid’s face when they leave the ground for the first time in the front seat of a small airplane!”

Airport Manager Nathan Coyle said, “It’s relationships with volunteers that benefit our airport. We are lucky to have volunteers who help keep the aviation system healthy.”

CAP Senior Squadron is looking for new members. If you are interested, check out their website and give Commander Chuck Colcord a call (904) 415-6331 or email him at charles. [email protected]