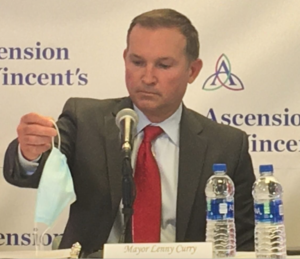 Jacksonville is due in less than two months to hold the Republican National Convention, and as late as Monday morning, there were no plans for a mask order. But as positive testing rates surged yet again over 13% with Sunday’s results, the city made its move, finally issuing an indoor mask order after weeks of reluctance.

The order goes into effect at 5 PM Monday and applies throughout Duval County.

Mayor Lenny Curry passed on the Monday press conference, leaving it to staffers, such as Chief of Staff Jordan Elsbury, to announce the move that had been still up in the air as late as Monday morning, when hospital CEOs apparently pushed for an order.

Curry, said spokesperson Nikki Kimbleton, “had a very important prior family commitment” that precluded his attendance, despite the “very fluid decisions made this morning.”

Asked why Curry didn’t release a video putting his name and face to the initiative, Kimbleton said that if Curry had “put out a video,” there would have been “no opportunity for media to ask questions and get answers.”

Elsbury said it was “irresponsible for media to message that the Mayor is absent for an announcement like this.”

Elsbury said the “recent adoption” of masks had no bearing on the RNC, “months away.”

The willingness to impose a mask ban came after weeks of resistance from not just the city, but Gov. Ron DeSantis, who has said he believes mask bans are unenforceable and counterproductive.

“It’s not an efficient use of resources,” Curry said at the time, even as other cities do have mask orders.

Yet even Gov. Ron DeSantis was unwilling to entirely rule out mask orders for the convention, expected to draw 15,000 in the arena, and thousands outside, in comments this weekend.

“We always said, look, it’s a work in progress. We’re going to try to get to ‘yes,’ but it was never anything where, you know, obviously we’re in a dynamic situation. So, they know that, and I think we’ll be fine by that time. It’s a couple months away. And we look forward to seeing that,” DeSantis said.

Hospital capacity is still robust, claim city officials, but that clearly needed to be protected. Expect more testing throughout the city also. To take the burden off of Lot J, the former federal site now run by the state, Lot J’s testing site will be relocated.

Mobile testing at the beaches will be phased in, as well as more hub testing at six “hard locations.”

Elsewhere, 128 COVID-19 positive patients are in Duval County’s jail, down from 178, with testing and quarantining now part of the booking process. Additionally, some non-violent inmates may be released, including via sentence modification, to try to cut down jail exposure.