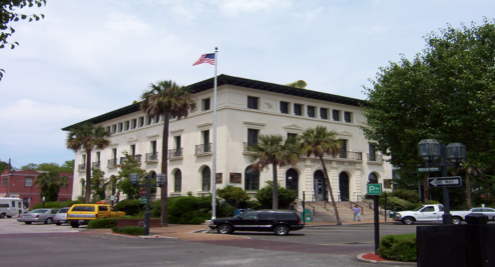 After years of talks and negotiations, the United States Postal Service (USPS) has given the city of Fernandina Beach a final answer on the historic Post Office and Customs House building on the corner of 4th and Centre Streets downtown:  the building is not for sale.

In a letter dated July 31, 2019, USPS Vice President for Facilities Tom A. Samra advised Fernandina Beach City Manager Dale Martin, “After evaluation of our options, we have decided the best course for the Postal Service is to retain the building and continue retail operations on the ground level.” 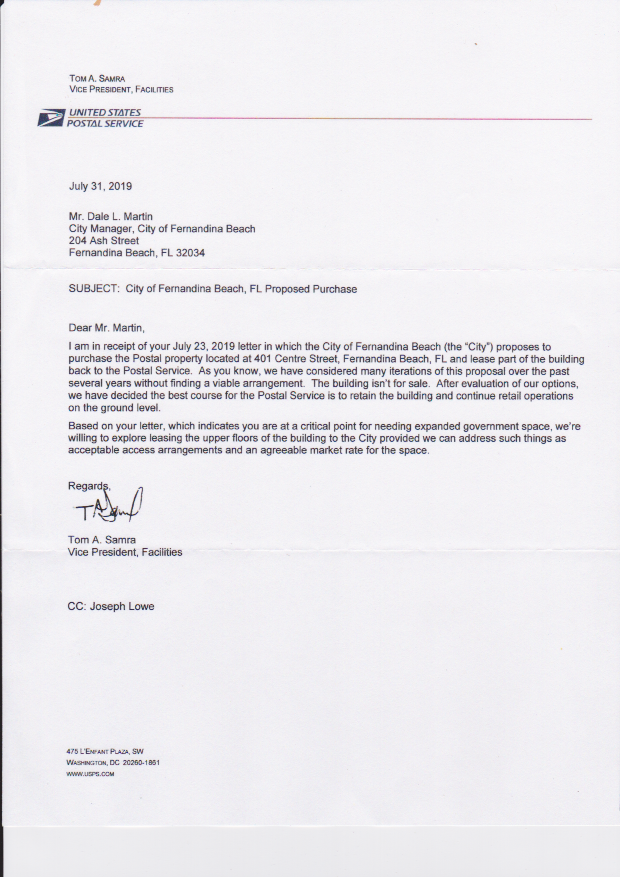 Martin has advised city lobbyist Arthur I. “Buddy” Jacobs of this development as well as U.S. Representative John Rutherford and U.S. Senators Marco Rubio and Rick Scott, all of whom devoted countless hours in an attempt to secure the building for the city’s use as City Hall.  Former Senator Bill Nelson also expended political capital during his tenure trying to accomplish this goal.

Despite well publicized financial difficulties, the USPS has apparently decided that it is in their best interest to retain the 24,000 square foot 1912, Renaissance-styled structure, occupied by one employee, rather than sell the structure so that it can be repurposed for better public use.  According to the Nassau County Property Appraiser, the building is appraised at $2,587,352.

In his letter Samra indicated that the USPS would be willing to explore leasing upper floors to the city, provided the parties can come to terms on access and agreeable market rates for space.  Given the accessibility issues of the building, Martin indicated that the city would probably not pursue this option.

The city has experienced significant issues with its current building at 204 Ash Street. City Hall, once an imposing historic building that housed both administration and the Fire Department, has been significantly modified over the years in an attempt to meet functional needs of a modern city.  In addition to outgrowing its space, the building itself has probably reached the limits of its useful life.  Several departments — Legal, Finance, and Information Technology — have been forced to relocate to the Peck Community Center in recent years, as the city has awaited the long-anticipated acquisition of the Post Office Building.

Prior to receipt of this letter, Martin had asked the USPS for a decision by August 30, so that the purchase or an alternative could be incorporated into the FY2019-2020 city budget.  Now that the USPS has made its final decision, the city will be faced with additional decisions with regard to meeting space needs.  That matter will require discussion at a future City Commission meeting.

At this writing, there is no indication that the USPS will alter its decision.