No plans to outlaw live music in Fernandina Beach 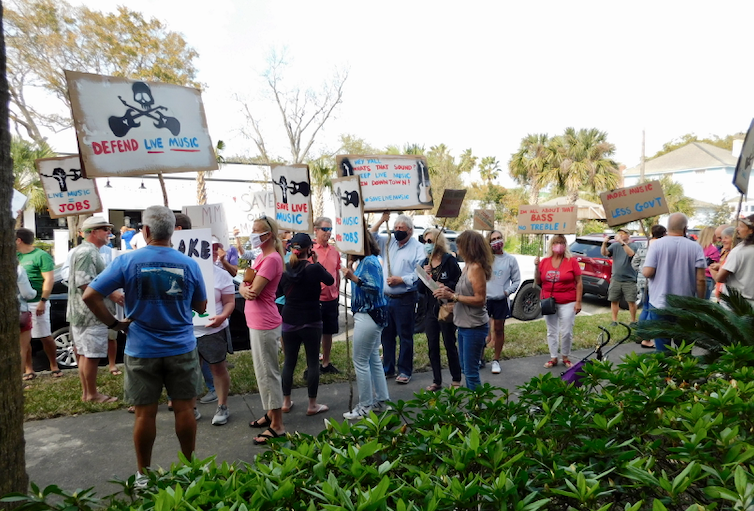 The item generating the most public concern at the March 16, 2021 Regular Meeting of the Fernandina Beach City Commission (FBCC) was not even on the meeting agenda for action.

A large group of peaceful but sometimes boisterous supporters of live music performances filled the Ash Street side of City Hall immediately outside Commission Chambers to protest what they believed was an attempt to close down live music venues in the City’s Central Business District.

City Commissioner Bradley Bean had placed an item entitled “Noise Ordinance Review” on the FBCC workshop agenda for discussion by the City Commissioners.  The FBCC cannot take action on items raised during workshops, and by custom public input is not allowed during workshops in order to give commissioners an opportunity to discuss among themselves various issues that might come before them for action at a future date.

Bean said that the issue was important to him and obviously to the mass of people assembled outside the Chamber, many of whom had brought signs advocating live music and help for musicians and local establishments that had taken a financial blow during the past year under Covid restrictions.  He said he was looking for a compromise that would work for music fans and residents alike.  “I think everyone here wants to live in a world where reasonable, live music remains in our city,” Bean said.  “As I say this I want to make clear that I am very pro noise ordinance, as long as it is a reasonable noise ordinance; but what we are seeing right now is not reasonable.”  Bean expressed his belief that wording in the current ordinance led to subjective interpretation of the term “plainly audible at 100 feet,”  which is the basis to allow the police to cite ordinance violations.  Bean suggested that the subjectivity could be removed from the ordinance if the City would adopt the use of decibel meters to measure sound levels.

Bean claimed that decibel meters are used in St. Augustine and St. Simons to positive effect.  As an engineer, Bean said that he wanted objective measures adopted to measure sound.  He reminded the public that revisions to the Noise Ordinance will come before the FBCC on April 6, 2021, adding that if a decibel meter is not part of the proposed revision, he will add it at that time.

Commissioner Chip Ross asked if all commissioners agreed that no one wants to cancel performances of live music.  Commissioners agreed.  “Excessive volume is what causes the problem,” Ross said.  “If the volume goes down, I think all these complaints will evaporate.  … This isn’t a music problem; it’s a volume problem.”

Ross said that he was neither for nor against a noise meter, but cautioned “Be careful what you wish for.”  Because noise meters also record ambient noise, measurements can be to the detriment of music venues, he advised.  He said to Bean, “You are right:  It is objective if you go through the metering and calibration.  And it is where lawyers make their money.”  He added that the Police Department does not support the use of decibel meters.

Vice Mayor Len Kreger said that while ha had received many emails from those in support of live music, he has also received emails with concerns from City residents about the level of sound generated.  He expressed concern over how the level of acceptable sound would be set.  “OSHA deals with level of sound and duration, which is different than not being able to get to sleep,” he said.  He agreed that the City should look at all options.

Kreger added that he had heard that some establishments were willing to install their own sound meters.  He said he would like to see that done as a test.

Commissioner David Sturges said he thought “this is kind of a simple problem.”  He said that in addition to considering use of a decibel meter, the City should also consider time limits to cut off live music performances, with one time for weekdays and another for weekends.  “We are a working town,” he said, “and we still function as a 7-day society, and people have got to get to work.”  He added that it would give Police a clear line for cutting off music performances.

Mayor Mike Lednovich emphasized that no one wants to eliminate live music.  “Music is part of the vibe of Fernandina, so we want to keep our music and keep musicians employed,” he said.  “But the downtown is an ecosystem comprised of residences, businesses, restaurants, live music.  One part upsets the other parts.  What we have to resolve here without being intrusive is how to create harmony among all those parts.”  He added that he had spoken with the manager of the downtown Hampton Inn who reported that the level of sound from the Boat House is problematic for their guests.  “Should the Boat House thrive and the Hampton Inn suffer?” Lednovich asked.  “How do we get both to prosper?”  He agreed with Bean on the importance of having measurable criteria for noise levels, but also raised arguments that could be used by attorneys in refuting sound level measurements.

“There is a lot of discussion needed around this topic, and I don’t think we are going to be ready [to amend the ordinance] in three weeks,” Lednovich said.

City Attorney Tammi Bach sought direction from the FBCC on revisions to the existing ordinance.  She said that she would bring to the meeting on April 6 sound levels used for enforcement in surrounding communities.  She advised Commissioner Sturges that the current ordinance already incorporates time limits:  10 pm on weeknights; 11 pm on weekends.  She said, “We haven’t had issues with late night issues or complaints for more than 10 years.  The current noise ordinance was adopted in 2009, and it has worked just fine with the plainly audible standard.”

Bach explained that when she incorporated the “plainly audible” standard into the City ordinance, she did so because that language has been upheld by the Florida Supreme Court, which found it not to be vague but an enforceable standard.  She said that the City Commission at that time has asked for a simple, enforceable ordinance.

“Our Achilles Heel in this was the design of the Boat House,” Lednovich said.  “We were more worried about them having TVs displayed outside than the performance area.  I would like to see some better thought in the future on how the sound travels.”

The workshop immediately preceded the FBCC meeting, so those that wanted to provide input on the future of live music downtown did so during the public comment section of the Regular Meeting agenda.  And 22 individuals — mostly city residents and many musicians — took advantage of their 3 minute speaking opportunity to express their concerns and in some cases offer suggestions to resolve ongoing issues regarding the volume of amplified music intruding into the city’s residential areas.

Different people provided varying reasons for the high level of public concern.  Some believed that the FBCC wanted to eliminate live music (not true).  Others cited announced plans to revise the existing ordinance — true, but only to eliminate areas with questionable Constitutional validity.  Many seemed unaware that the City has an ordinance that has been operating fairly effectively since its adoption in 2009.

Only two speakers spoke on behalf of neighboring residents affected by the high levels of sound. 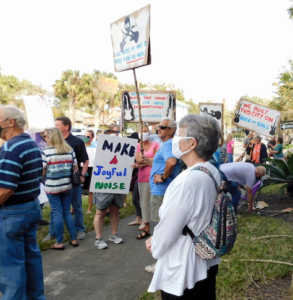 The current brouhaha arose following the opening of the Boat House Restaurant across from both City Hall and the Hampton Inn a few months ago.  Noise complaints resulted in citations against the establishment quickly thereafter.  Amplification of concern via social media rumors and claims appeared to have played a role in public concern that the City intended to ban live music.

Speakers stressed that live music is one of the defining characteristics of Fernandina Beach, accounting for large audiences of locals and visitors alike.  Some objected to music being classified as noise, comparing it favorably to sounds generated by the railroad, the mills and the log trucks.  Speakers questioned the definition of “excessive noise”  in addition to the term “plainly audible.”

Subjectivity of enforcement also appeared to be a concern with musicians indicating that when asked by patrons to turn the sound level down, they comply.

Many people addressed the hard times endured by local establishments and musicians during the past year because of the coronavirus pandemic.  They wanted assurances that the City would not put obstacles in the way of a return to normal, where music venues and musicians could recoup some of their financial losses.

Virtually all the speakers agreed that it was reasonable to impose cut off times for music at 10 pm on weekdays and 11 pm on weekends.

Lisa Finkelstein, Executive Director of Fernandina Beach Main Street, has announced that she will spearhead an effort to bring the local downtown music venues together to draft recommendations for solving the problem.

The magnitude of the problem should probably be viewed in the context of complaints. Deputy FBPD Chief Mark Foxworth has reported that since 2017, only 5 citations have been issued citywide for violations of the noise ordinance.  The table provided (below) would seem to indicate that complaints have been resolved informally for the most part, with the police working constructively with residents and businesses.

The current City Noise Ordinance is found in Section 42-142 in the Municipal Code.

This last occurrence in addition to the Boat House, motivated lots of people to attend the FBCC meeting.

The Patio has also had its noise music complaints too so something is not right.

Just remember this important statement. ” Businesses use to have apartments above the shops. Also the new Townhouses were built AFTER LIVE MUSIC BECAME MORE OF OUR COMMUNITY .

I suggest you look up the definition of Tyranny. The cruel, unreasonable, or arbitrary use of power or control by the commission to disregard the residents & the turmoil that ensues when unrestrained volumes of music encourages loud singing, shouting, and louder conversations between customer at these establishments to be heard over the loud music.