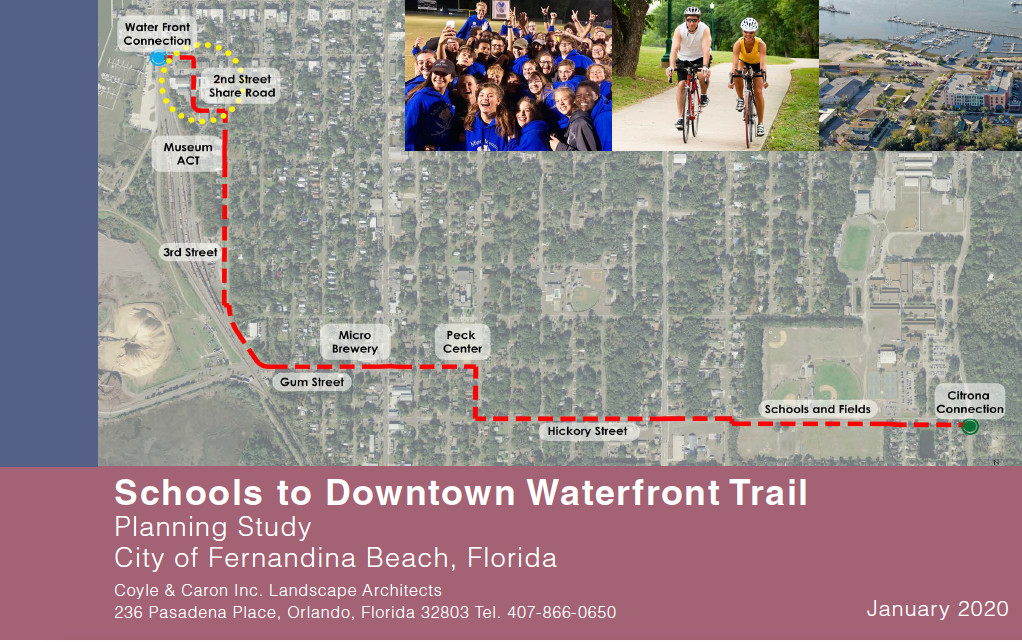 The landscape architectural firm of Coyle and Caron, Inc. presented their final planning study for the proposed “Schools to Waterfront Trail” to the Fernandina Beach City Commission (FBCC) on June 16, 2020.  The trail is proposed to run from Hickory and Citrona to the downtown waterfront.  Following their presentation, Mike Spino of the North Florida Bicycle Club provided an overview of the community outreach efforts completed to date related to the proposed trail.  The plan had been previously presented during a public workshop attended by more than 50 people including City Commissioners held at the Peck Center on January 23, 2020.

The planners and Spino made their presentations following the announcement of Phil Scanlan’s passing, which reinforced the tributes to Scanlan’s involvement with biking and trails.

The entire plan is available in detail on the city’s website by clicking here.

Planners Sally Coyle and Alex Green explained the rationale for the proposed route as well as the plans origins in the community’s desires to connect many important gathering points by a trail on which walkers and bikers could safely travel.

Coyle listed ten considerations that the planners addressed in their final proposal:

Mike Spino stressed the amount of time and effort that has been invested in community outreach.  He recapped the January 23 meeting concerns and explained how they were being addressed.   He provided Commissioners with a handout that detailed the outreach efforts — knocking on doors, speaking to neighbors of the proposed trail, handing out flyers and speaking to key constituents, including the School District.

Both Spino and Coyle acknowledged that there were still some areas of concern that they were working on, especially along South Third Street.  But they remained optimistic that the problems could be solved amicablly.

The City Commission unanimously agreed to direct the City Manager to proceed with preparatory work in seeking grants to move forward with the project as presented.