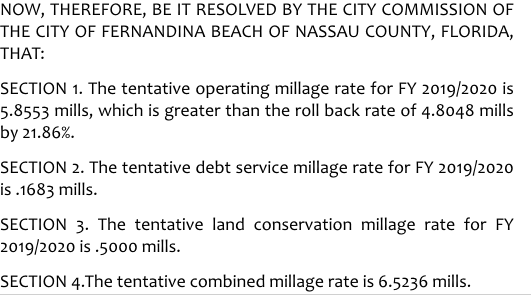 For each new fiscal year which begins October 1, the FBCC is required by law to adopt a proposed millage rate and schedule public hearings prior to adoption of the final millage rate and budget. An early step in the annual budget adoption process is to set a millage rate, referred to as the tentative or proposed rate. Once set, this rate may not increase, but may be decreased during the budget process.

The FBCC held the first mandated meeting to set a tentative millage rate on July 30, 2019.  Unlike previous first meetings on proposed millage rates and budgets, this meeting was well attended, with approximately 30 audience members.  After barely an hour that included a budget presentation from City Manager Dale Martin, audience input and commission discussion, the FBCC unanimously approved the proposed millage rate and the draft budget as presented with the proviso that the Conservation Levy of 0.5 mills would be for the FY2019-20 year only.  Whether it continues will depend on the results of a citizen referendum to be held in November 2020.

Only one speaker opposed the inclusion of a Conservation Levy, while 8 speakers urged commissioners to support the measure.  Following the vote, the audience applauded the FBCC’s action. 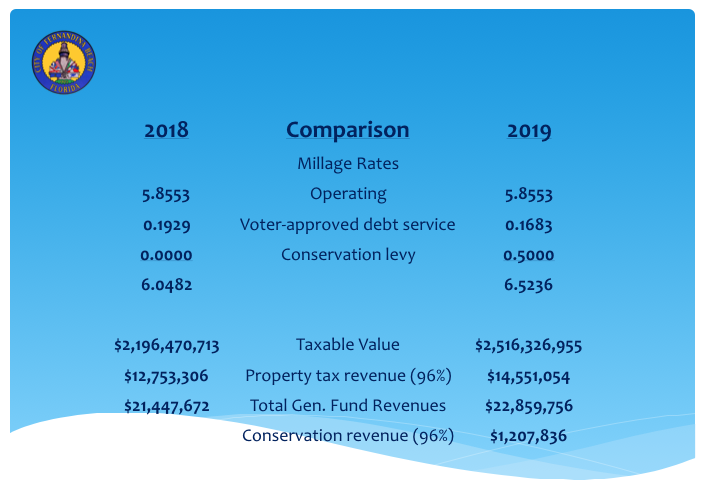 The City’s Fund Balance Policy (per Resolution 2012-128) establishes 20% as the minimum for the General Fund’s unrestricted, uncommitted, or unassigned balance. Another portion of the General Fund Reserve is restricted per Florida Statutes 553.8(7), and may only be used for expenditures related to the Building and Permitting functions. The anticipated unrestricted, uncommitted, or unassigned reserve for fiscal year ending September 30, 2019, is budgeted to be 20.0%. The total reserve, including the restricted portion, is anticipated to be 29.8%.

In presenting the budget, City Manager Dale Martin explained that some of the changes reflect his reorganization of various city operations.  For example, staff currently assigned to the Maintenance Department will be reassigned to Parks. Several part time positions will be converted to full time positions.  He is adding a Deputy City Manager to be responsible for engineering and project management.  He is also creating a Beach Management Department to centralize responsibility for beach maintenance and operations that are currently spread throughout several city departments.

Should the FBCC vote to enact paid beach parking as a separate action at a future meeting, income and expenses for such operation will be included in this department’s budget.

Martin also explained that the city has given the Postal Service a deadline of August 30 to indicate their willingness to sell the historic Post Office Building on Centre Street to the city for use as future City Hall.  The city has been working with the Postal Service for several years in an attempt to reach an agreement with no apparent resolution.  Should the Postal Service decline to move forward, the city will need to address space needs in another way.

Other capital expansion projects anticipated for FY2019-20 include:

Most commission discussion centered around the conservation levy and the Beach Management Department.

City staff incorporated the conservation levy into the upcoming budget projections based upon the draft results of the 2019 National Citizen Survey in which 54 percent of respondents indicated that they strongly or somewhat supported a half-mill tax to support the Land Conservation Trust Fund.  A half-mill generates approximately $1.2M.  Expenditures would be restricted to the sole purpose of conservation land acquisition.

Although the FBCC had previously approved a ballot initiative seeking public approval to dedicate tax revenue to purchase land for conservation, there was concern that with the pace of development in the city, waiting for November 2020 might jeopardize acquisition of certain parcels.  Marc Hutson of the North Florida Land Trust (NFLT) addressed the FBCC and informed them that the NFLT would be launching a matching campaign to raise $4M over 4 years to purchase land for conservation in the city.  The campaign’s goal was to raise one million dollars per year that would be matched by city contributions.  He said that donors want to be assured that the city “has skin in the game,” before contributing.

Commissioner Chip Ross stressed that the money raised in the conservation levy could only be used to buy land.  He said the only way to preserve land is to buy it, “lock box it.”  Such city action will protect the Greenway from degradation as well as increasing land values elsewhere in the city.  He called the budget vote “one of the most critical votes to be taken to conserve our environment.”  Ross presented a map showing lands recommended for acquisition by the North Florida Land Trust: 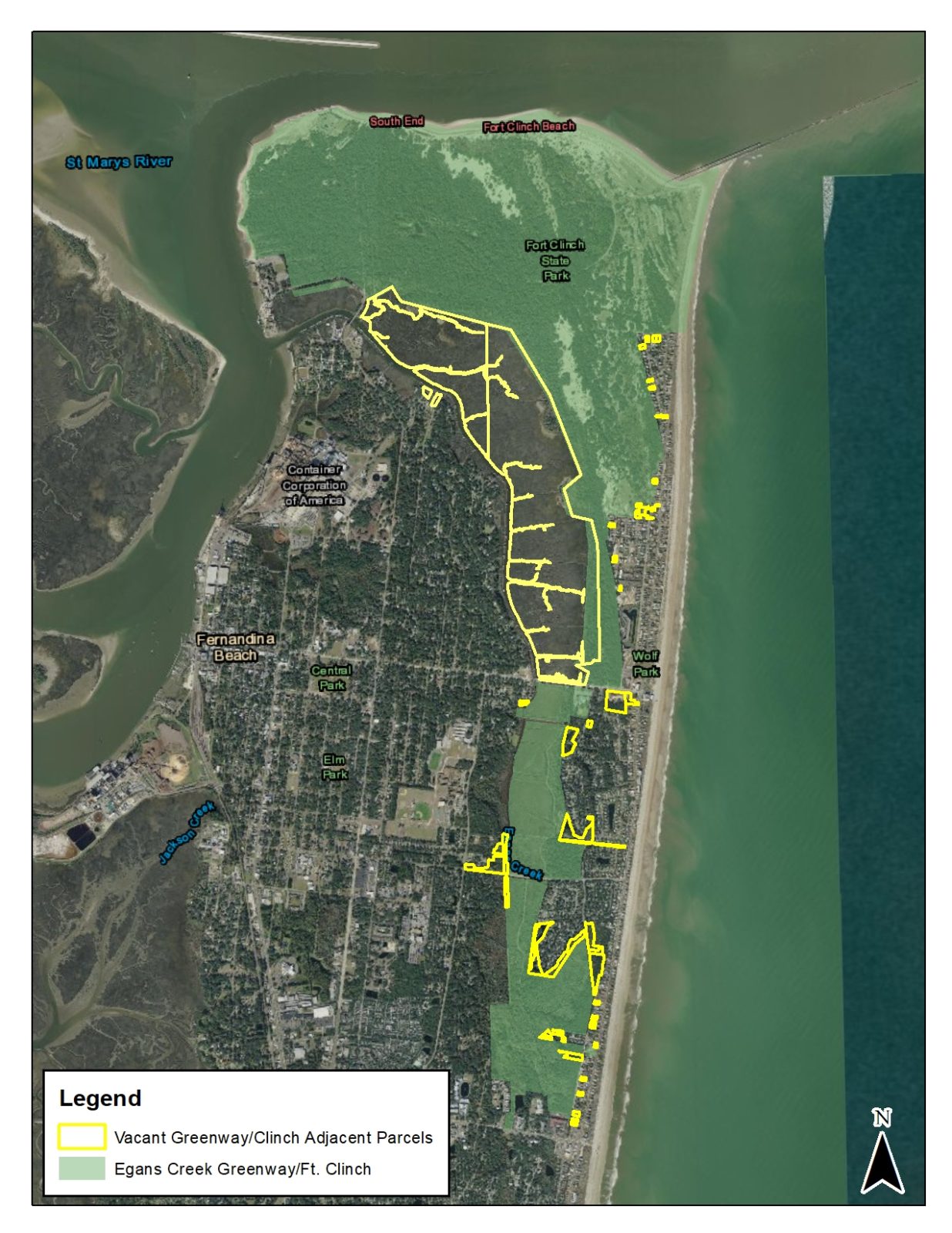 Vice Mayor Len Kreger agreed with Ross and cited the benefits of working with the NFLT to fundraise and attract donors.

Commissioner Mike Lednovich said that many residents do not trust the city spend money raised via the conservation levy on land acquisition.  Commissioner Phil Chapman said that “mistrust” would be dispelled by the land that the city purchases.

Based upon results from the 2019 National Citizen Survey draft results, 60 percent of respondents strongly or somewhat supported paid beach parking with the proviso that fees for city residents would be paid by the city.  With full implementation of a paid beach parking plan, the city projects annual revenues at one million dollars.  Revenues would be dedicated to the Beach Management Department and expenditures limited to beach-related costs. 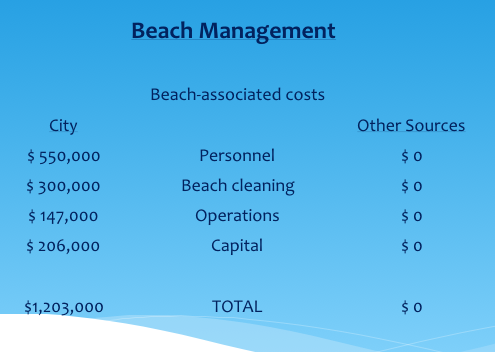 In his presentation to the FBCC, City Manager Dale Martin presented the results of a survey undertaken by the Tourist Development Council (TDC) designed to determine who uses island beaches.  He reported that in interviewing 566 beach goers at the Sadler Road and Main Beach parking lots, between July 19-21 this year, only 25 percent of the parking lot users resided within the 32034 ZIP Code.  Since the ZIP Code covers a wider geographic range than the city of Fernandina Beach, Martin estimated that of that 25 percent, conceivable only 16 percent were actually city residents. 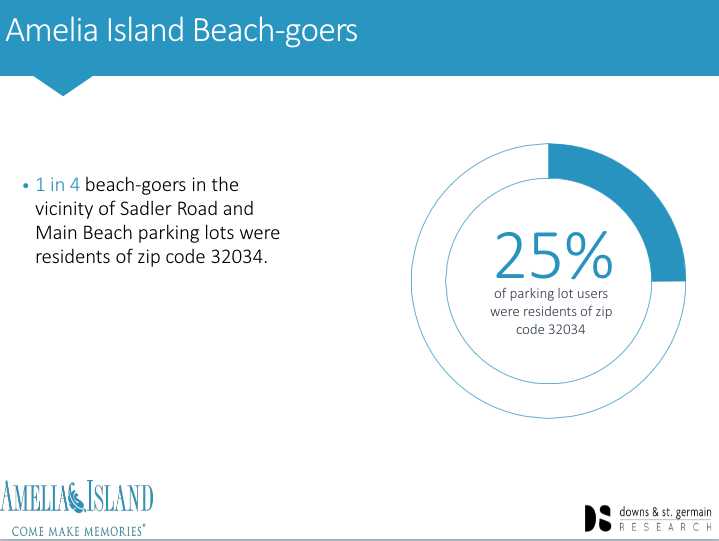 The remaining 75 percent of the beach goers divided almost evenly into daytrippers or overnight visitors.

Lednovich said that he would only support the proposed millage rate and budget if it did not include paid beach parking.  City Manager Dale Martin and City Attorney Tammi Bach agreed that an ordinance would be needed to enact paid beach parking, separate and distinct from the resolution under consideration.  Lednovich said he wants the issue of paid beach parking placed on the ballot for residents to decide.  However, other commissioners declined to comment.

Should the FBCC fail to pass a paid beach parking ordinance, the city’s budget would need to be adjusted accordingly to cover beach costs by other means.

Future workshops and meetings on the FY2019-2020 Budget have been scheduled and are listed below: