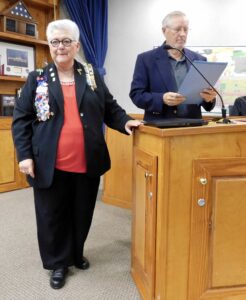 The Proclamation called attention to the valuable contributions of Native Americans as well as deplorable violence directed against these people in the past. “While we cannot undo the pain and tragedy of the past, we can set out together to forge a brighter future of progress and hope across Indian Country and the entire American landscape,” Lednovich read.

In accepting the Proclamation, which the City delivers each year, Curtin explained a bit about the DAR’s involvement in helping Native Americans, dating back to the Great Depression in the 1930’s. Every one of the 3,000 DAR chapters nationwide has a committee to promote the welfare of Native Americans, especially children on reservations.