Fernandina Beach City Manager Dale Martin presented his budget for the upcoming fiscal year to the Fernandina Beach City Commission (FBCC) at the beginning of the FBCC’s July 21, 2020 Regular Meeting.  The budget was prepared with input from all the City departments and has been discussed in-house over the last few months as well as in individual meetings with Commissioners.

Martin confirmed the promised elimination of the 0.5 millage that was added last year to purchase conservation lands.  The milllage rate for the new year, which begins October 1, 2020, would decrease from 6.5236 to 6.0106.  The proposed rate includes an operating millage rate of 5.8553 and voter approved debt serivce of 0.1553. 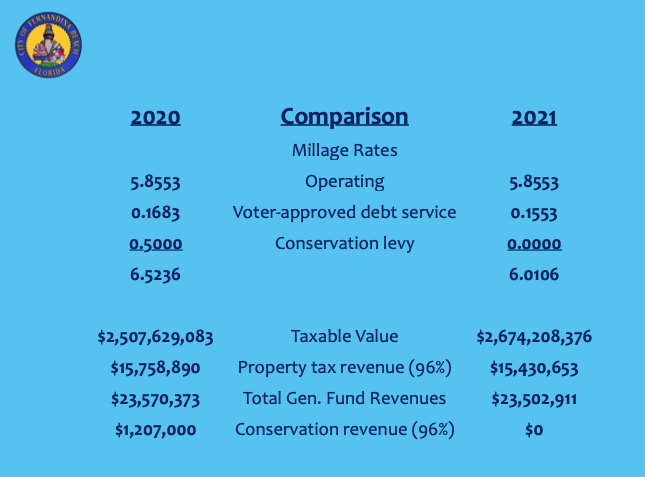 Martin said, “Under Florida statutes, the proposed operational millage rate (5.8553) exceeds the “roll-back” millage rate by 0.5576 mills, or 10.53%, and must be announced as a tax increase. Despite the statutory declaration as a tax increase, the amount of City taxes owed by most property owners will decrease.”  The estimated reduction in City taxes for “homesteaded” properties is approximately $37 per $102,300 of Taxable Value.  For “non-homesteaded” properties that, in aggregate, saw property values increase by 6.6%, the estimated reduction in City taxes is $11 per $106,600 of Taxable Value. This estimate may vary greatly based upon specific Market Value changes to individual properties as determined by the Property Appraiser.

Capital projects included in the Budget are provided below: 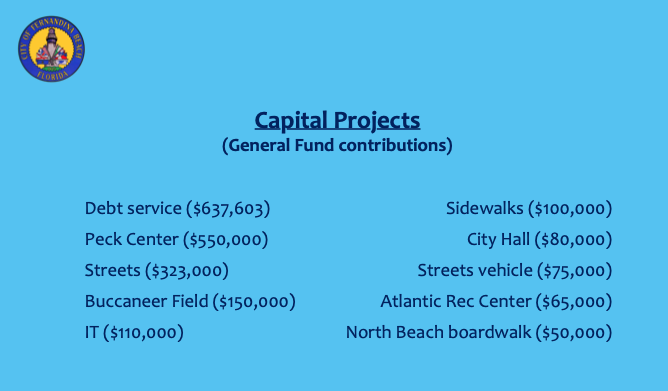 The City Manager recapped the fiscal plight of both the City Marina and the City Golf course.  He reminded Commissioners that last year Stantec presented the City with an integrated Financial Stabiliity Analysis.  In their report they opined:

“The City’s current millage rate, property value projections, and other sources of revenues are expected to produce sufficient revenues to meet the General Fund’s ongoing capital and operating costs through FY 2029.”

“The Golf Course Fund’s and Marina Fund’s cash flows are structurally unsustainable and will require significant increases to revenue or annual cash support from the General Fund in order to fund ongoing operational costs, debt service, and capital requirements.”

“The General Fund is projected to have sufficient cash flow surplus to support the Marina Fund and Golf Course Fund if the City chooses to do so.”

Martin then proposed increasing the City’s contribution to each of the two enterprise funds so that both can be debt free in 2024.

With respect to personnel recommendations, Martin proposes to increase the number of City employees by 3.5.  This includes converting 3 part time positions to full time (while eliminating one part time position); adding a part time Code Enforcement Officer to work evenings and weekends; a position to oversee and coordinate the Comprehensive Plan update and subsequent LDC revisions; an additional planner.

The Deputy City Manager position was authorized for the current year but not filled.  Martin proposes to fill it in the coming year with a project manager who would also serve as engineer to the Utilities Department to replace the retiring John Mandrick.  In the spring, the City will also see the retirement of Police Chief James Hurley, necessitating another high level hire.

In his Weekly Comments column this Friday, Martin will further explain the rationale for the proposed budget.

There will be a Special Meeting of the FBCC on Tuesday, July 28, 2020 at which the Commissioners will vote to set the tentative millage rate.  Martin explained that the operating millage rate he is proposing is higher than the rollback rate and would require a vote of 4/5ths of the FBCC to be approved.  The rate that the FBCC sets Tuesday represents a ceiling.  Through subsequent public budget meetings, the FBCC may decide to make budget cuts that would lower the rate.  However, they will not be able to raise rates above those set on July 28.

There will be budget workshops for the FBCC on August 5 and 11, to discuss and/or suggest alterations to the Manager’s Budget proposal.  These will be followed by Public Hearings on the Budget on September 8 and 22.  The proposed adoption date for the new budget is September 22, 2020.  The Budget must be approved by October 1, 2020, the start of the new Fiscal Year.