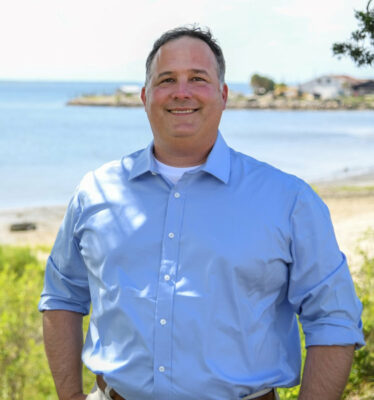 EDITOR’S NOTE: A few weeks ago, we offered the seven Fernandina Beach City Council candidates an opportunity to submit a 1,000-word essay on whatever is on their minds about the city. This is the fourth essay submitted.

My name is Darron Ayscue and I am a candidate for City of Fernandina Beach Commissioner, Seat 5, a local Nassau County firefighter of 23 years, and 20-plus year resident of Nassau County. My wife Michelle and I met in high school at Terry Parker in Jacksonville and have two children, Macy and Tyler. Macy is a recent graduate of Fernandina Beach High School and is studying nursing at Jacksonville University and Tyler is a rising senior at Fernandina Beach High School, and is expected to follow in the family trade of firefighting. I have served as commissioner and chairman of Amelia Island Mosquito Control District and understand how government functions. I am ready to lead the City of Fernandina Beach into the future and do so with a common-sense approach.

One of the most important functions of government is to develop policies in the form of ordinances, zoning, and regulations that ensure the safety and well-being of residents and visitors.

These policies should be well thought out, have the support of the majority of residents, and be enforceable. One of the most recent ordinances adopted by the City of Fernandina Beach doesn’t meet any of these criteria.

Why did the city adopt a no smoking ban on the beach and in city parks? I am not a smoker. I’m a local firefighter and know the hazards posed by smoking. Albeit that I don’t mind that other people smoke, I also don’t want to step on a discarded cigarette or cigar butt at the beach any more than anyone else.

However, when the city enacts a ban on smoking on the beach and in city parks, we hear too many reasons why that doesn’t make sense. Is it because of littering? The city already has a fine for littering that is already difficult to enforce. Is it because the smoke is annoying or a hazard to those in the open-air setting? If that’s the case, why are cigars still allowed? And how is this contradictory ordinance going to be enforced?

Poorly thought-out ordinances like this continue to shrink the freedoms of the general public to interact peacefully and responsibly on the beach and in the city parks.

I highlight the smoking ban as one example of government overreach and knee-jerk reaction to perceived problems rather than a well thought out common-sense approach.

We continue to condense freedoms for all to satisfy the thirst of those few that operate in the abstract. We should strive to protect our neighbors’ freedoms as feverishly as our own. We have become a government of the governing instead of a government for the people. That needs to change.

When governments find ways to restrict for no sensible reason, the freedoms of ourselves and our neighbors, we need to make changes. As a city commissioner my promise is to bring sensible solutions to the conversation and approach every issue with freedom of the people as the central goal.

My objective is to study all sides of the issues and produce policies that are productive and sensible, not punch lines. If you’re looking for the candidate that brings leadership, experience and a common-sense approach, please vote Darron Ayscue for City of Fernandina Beach Commissioner, Seat 5, on or before November 8.

Well said! I totally agree and I do vote in Fernandina.

I once volunteered to pick up cigarette butts at Peters Point. Never again. Sorry, Darren, if this is an example of your decision making process concerning regulation of cigarettes on the beach, my vote’s going elsewhere. This is not about “firefighting”, which is important to all of us. It’s about sanitation in a public space – a basic reason we have government in the first place.

I am allergic to cigarette smoke. I like the rule that public places ban smoking of all kinds. Separate areas can be set aside for those who have a smoking hobby. Yes, hobby. There are rules about where people can practice hobbies such as football, baseball, etc. So they won’t inadvertently injure others. Smoking can injure others, too. This is NOT taking away a freedom but instead giving a freedom to the many, many people who want to enjoy the outside spaces without being poisoned by smoke.

I watched the debate organized by the Chamber of Commerce. I found this candidate ill prepared and uninformed of important city issues. He basically uttered punch lines to get by.